A Rebirth of Live Theatre With An Octoroon

It is impossible not to rejoice about our local theatres re-opening to live attendance after the incalculably difficult year of Covid-19. And it is not entirely surprising that it’s the spunky little Fountain Theatre in Hollywood that took the bold step of converting its small parking lot into an open-air stage. It has kicked off this resumption of live performance with the Los Angeles premiere of An Octoroon by Branden Jacobs-Jenkins.

This playwright is not new to satire or the city, which saw his play Neighbors at the Matrix a few years ago, Appropriate at The Mark Taper Forum in 2015 and, most recently, Gloria at Atwater Village. Satires all.

Here’s a bit of what I wrote then: “Having only seen two of his plays — Neighbors and Appropriate, with both of which I had some problems — I don’t consider myself a fan of Branden Jacobs-Jenkins, but a person willing to be persuaded otherwise. So why should I be surprised that the Echo Theatre’s production of his play Gloria, [found] me again conflicted?

“Let me amend that. The man can write. The man also can overwrite. Few other playwrights have the talent to so skillfully annoy and arouse an audience at the same time, while elbowing a crooked path to shiny little kernels of alarming truths.”

Note that in all three cases, what seemed like negative criticism was tempered by a kind of backhanded approval. The same applies to the shenanigans of An Octoroon. So all of this is no mystery. 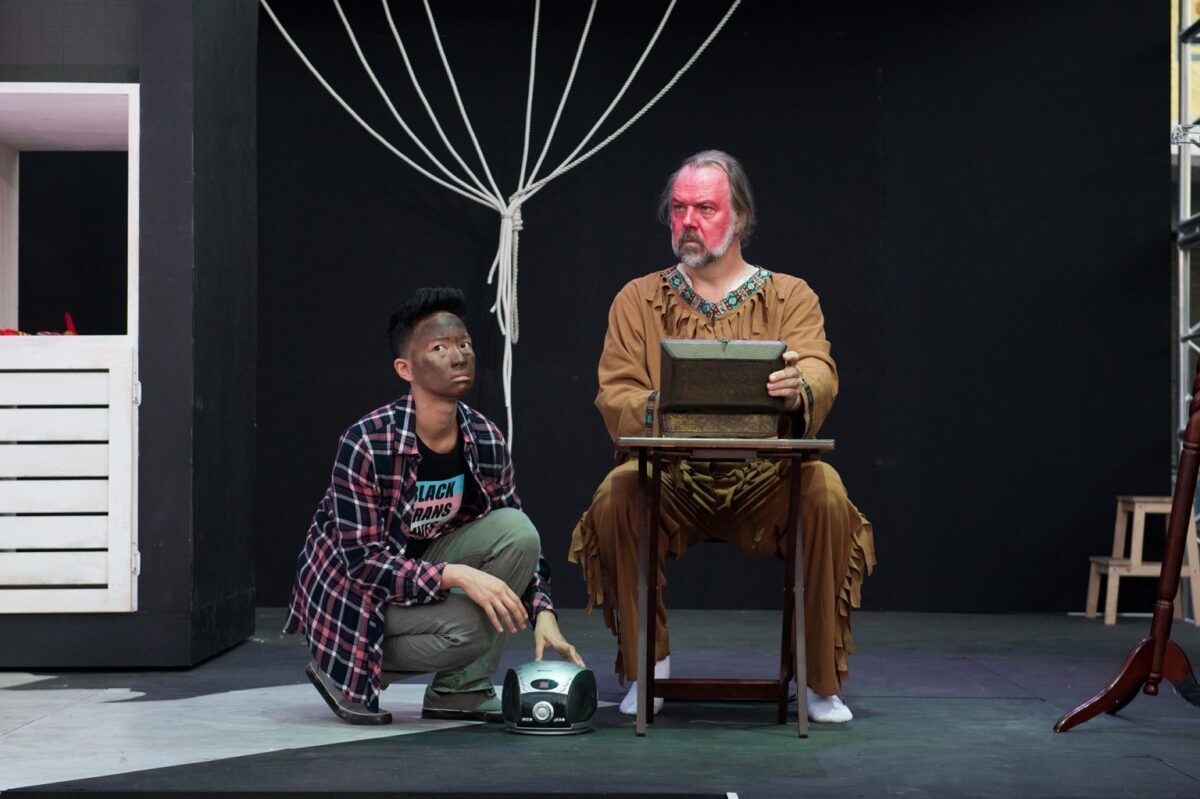 l-r, Hazel Lozano crouching at the feet of Rob Nagle as he applies make-up in An Octoroon at The Fountain Theatre.

None of this happens because Jacobs-Jenkins doesn’t know what he’s doing. On the contrary. Jacobs-Jenkins overreaches because his wildly fertile and original imagination frequently outpaces the theatre’s ability to keep up and fulfill his objectives. Call it whatever you will, but one cannot dismiss the work’s level of smarts, guts or ambition, even if — or when — it remains rough around the edges and doesn’t entirely satisfy.

An Octoroon drew its inspiration from Dion Boucicault’s The Octoroon, which premiered in 1859. You read that correctly. The use of so-called Brechtian devices attributed to Jacobs-Jenkins’ loose adaptation of the Boucicault melodrama is immaterial. He needs no help from Brecht or anyone else. This Octoroon’s extended satire is pure Jacobs-Jenkins, including the dubious interpolation of the folklore trickster Bre’er Rabbit, especially since this Bre’er Rabbit in particular is an extremely well mannered individual. More on that later.

An Octoroon introduces us to the good people of Louisiana’s Terrebonne plantation. They are living on the cusp of catastrophe thanks to some bad financial decisions made by the plantation’s now-deceased owner. This means that his dying widow, the kindly Mrs. Peyton, who we never see, and their son George (a handsome, upright and naïf young man played by Mathew Hancock) may lose Terrebonne, thus also endangering their beloved population of slaves.

A chunk of cash that is due them from a company in London needs to arrive in time to forestall a dreaded auction. And since this play is above all a tongue-in cheek-melodrama in extremis, complications abound. The biggest one is the presence of one M’Closkey (also played by Hancock), a mustachioed villain salivating to pounce on Terrebonne and is prepared to do whatever it takes to grab it.

Good son George seems somewhat oblivious to this situation, torn as he is between his impossible love for the octoroon Zoe, his father’s illegitimate daughter (a lovely Mara Klein), and the relentless efforts of Dora (Vanessa Claire Stewart), the Southern Belle next-door, who has set her determined sights on George. 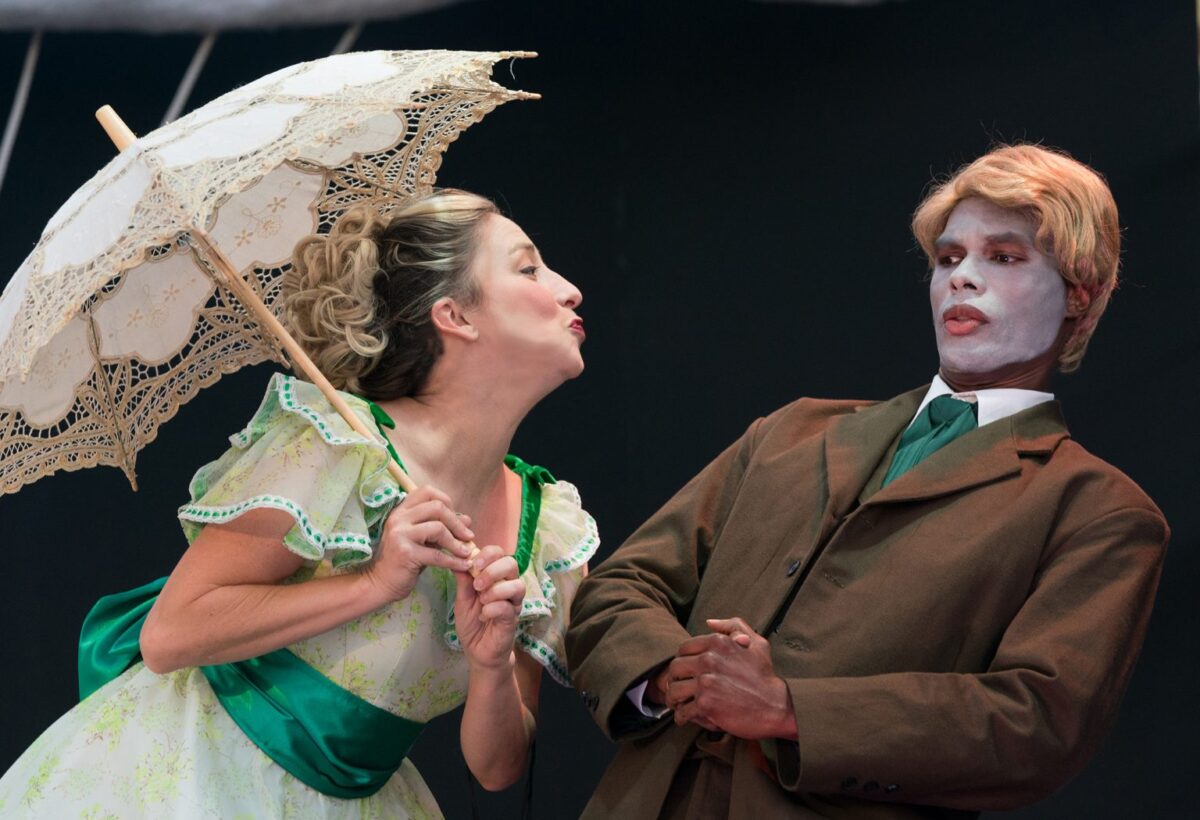 Vanessa Claire Stewart as Dora reaching for a kiss from George, played by Matthew Hancock in An Octoroon at The Fountain Theatre.

There is, of course, plenty of other action as well, with black actors using white face, white actors using red and/or black face and the cartoonish collection of plantation slaves running the gamut of caricature from wily to goofy. The ever-excellent Rob Nagle does a riotous turn as the Indian Wahnotee (in red face), while best-friend-slaves Minnie and Dido (Pam Trotter and Kacie Rogers, respectively) serve as our unofficial guides to slave life at Terrebonne, while entertaining us as gossipy story-tellers who speak in shameless anachronisms.

The zany plot swings recklessly from danger to worse, with George’s new-fangled toy, an “apparatus” otherwise known as a camera, becoming key to the plot by revealing evidence of a villainy that saves the day. (Now when did such an event with a camera last happen in your lives?)

Jacobs-Jenkins never stops thumbing his nose at us with abandon, starting with the list of dramatis personae that offers a bewildering multiplicity of choices, including the double-casting of opposing roles (sweet George and nasty M’Closkey). It crests with a daunting moment when the intrepid Hancock, who plays them both, has to engage in a fight scene with himself! 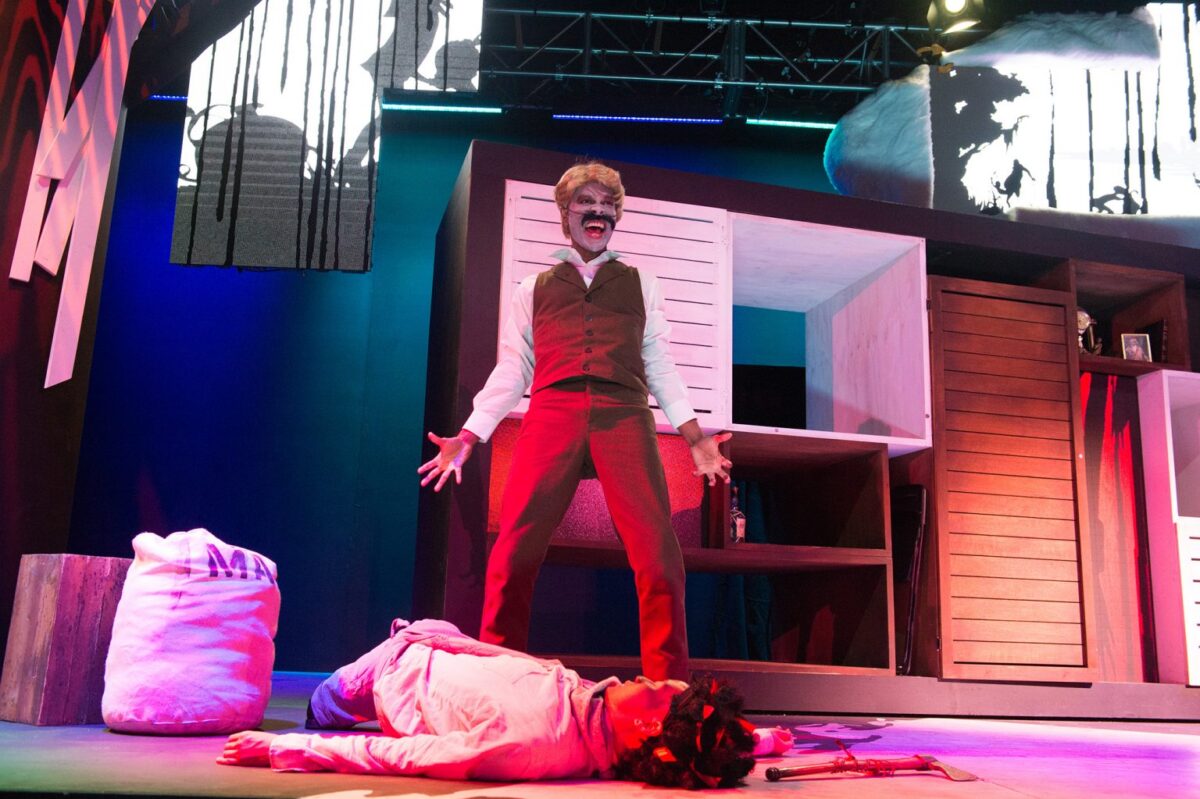 Matthew Hancock as M’Closkey, standing over the body of Paul, played by Hazel Lozano in An Octoroon at The Fountain Theatre.

About that very polite Bre’er Rabbit. The intended symbolism and its hoped-for significance in the scheme of this satire is understandable, but he feels like an afterthought in this play that Jacobs-Jenkins couldn’t resist. He is more of an outlier than a part of the action. Since this Fountain production clocks in at a hefty two hours and 30 minutes, eliminating the natty bunny (nicely impersonated by Leea Ayers), might help to speed things up.

It’s a tempting idea. At the early performance I attended, that lagging came and went in waves pretty much throughout. Given the challenges of dealing with a new stage with limited wing space, and the playwright’s notoriously fractured scenes, anything that can stimulate speed should be welcome. The production will probably pick up steam over the course of the run, but that shouldn’t discourage director Judith Moreland to whip up all the momentum she can muster right now. 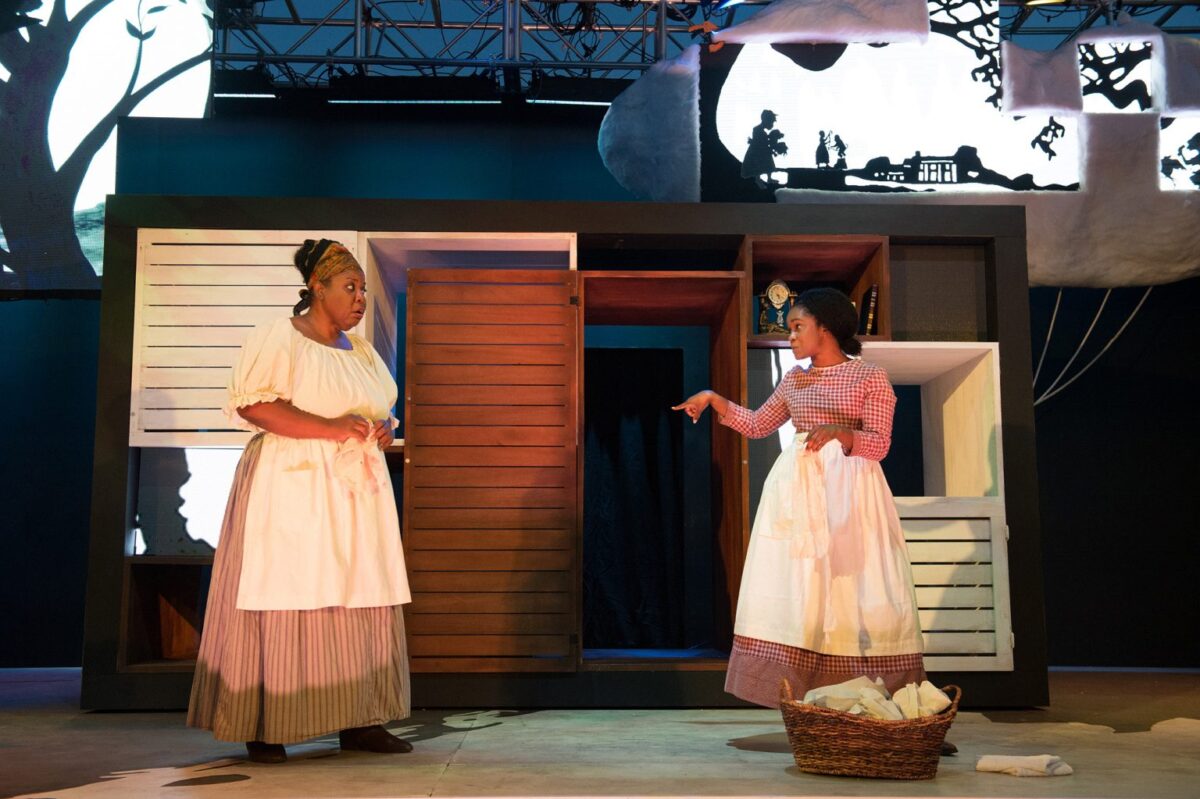 l-r, Pam Trotter & Kacie Rogers in An Octoroon at The Fountain Theatre.

All photos by Jenny Graham

WHO:
Written by Branden Jacobs-Jenkins
Presented by The Fountain Theatre

Street parking, plus some spaces in the parking lot across the street for $5.

Tags:
Previous Article
How the Arts Can Help Your Child’s Brain Injury Recovery
Next Article
Great Wall of China