Abstract Painter Joan Mitchell Gets Her Day in the Sun

Joan Mitchell, celebrated in a major retrospective that just opened at the San Francisco Museum of Modern Art, may be the best Abstract Expressionist you’ve never heard of.

Born in 1925 to a wealthy family in Chicago, she grew up to be a talented athlete and artist, attending Smith College and training at the School of the Art Institute of Chicago. Her early work as a student shows the influence of Impressionism, especially Monet and Van Gogh, and also of Cubism.

After graduation, Mitchell traveled to Mexico and France, then moved to New York in 1949. There she quickly became part of the downtown art scene, embracing abstract art and making friends with painters including Willem de Kooning, Franz Kline, and Philip Guston. She married the publisher Barney Rosset of Grove Press in 1949 (and divorced three years later).

Mitchell participated in the first major exhibition of Abstract Expressionism, the influential Ninth Street Show in 1951. Organized by Leo Castelli, it featured works by Jackson Pollock, Hans Hoffman, Robert Motherwell, and de Kooning, among others. Though she was living in an art world dominated by men, she was on her way. 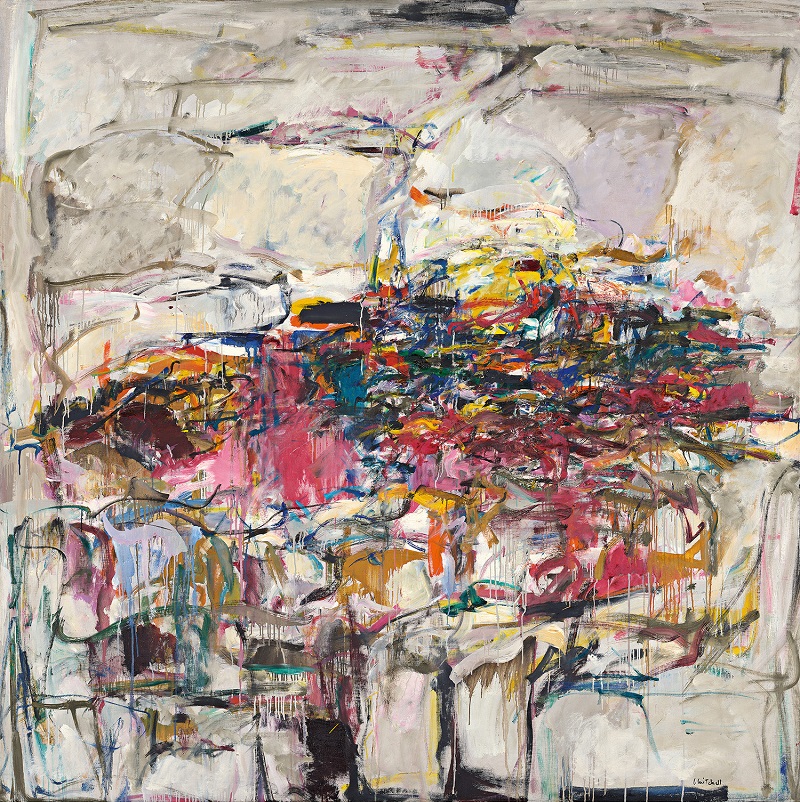 Mitchell’s City Landscape of 1955 is a good representative of her early work. The large painting, almost 7 feet square, features a dense jumble of colors — red, yellow, blue, orange — across the center of the canvas, like a fireworks display gone mad. The upper and lower segments are covered by gray and tan forms that might suggest a stone wall or the scales of a giant reptile. Still, the overall impression is not obviously one of a city landscape. 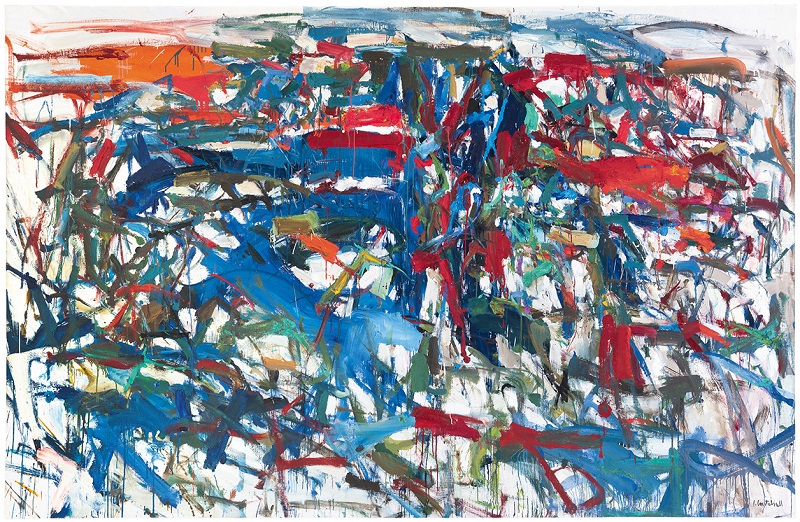 A slightly later work, To the Harbormaster of 1957, shows how Mitchell’s approach to abstraction evolved in New York. The canvas is still large but now rectangular, about 12 feet wide by 6 feet tall. It’s covered all over with large gestural strokes of color, mostly blues and reds and oranges, and the paint is applied in thick swaths, with lots of drips. The painting seems like a cross between Jackson Pollock’s approach of filling every square inch of a canvas with energetic squiggles and Franz Kline’s broad, dramatic brushstrokes.

In the late 1950s Mitchell traveled frequently to France, and by 1959 she moved there permanently, first to a studio on the Left Bank in Paris. With the help of the California painter Sam Francis and other Americans in Paris, she connected with the city’s art scene. Later, in 1967, she used family money to buy a large estate northwest of Paris called La Tour, near the village of Vetheuil. (Monet once had lived in a cottage on the estate, which overlooks the Seine.)

The move to the French countryside seems to open up Mitchell’s works. While remaining abstract, their colors become lighter, brighter, more like the lush French countryside. In Bracket of 1989 (top image), she combines three vertical canvases, each with their own focus on clusters of vaguely vegetative color in their centers, to create a stunning large horizontal work. 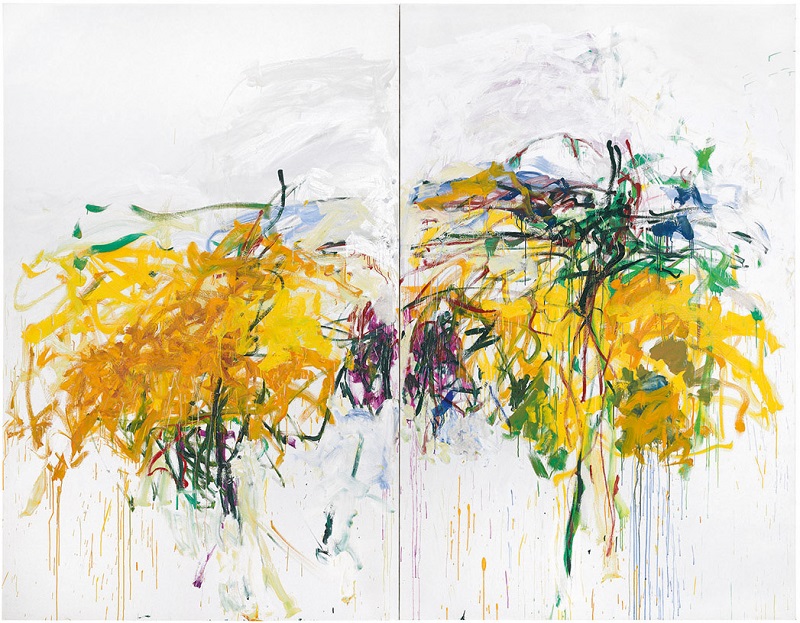 By the 1990s, she had simplified her style and, perhaps, inched closer back to figurative painting with works like Untitled of 1992, the year of her death. The 9-by-12-foot picture is composed of two vertical canvases and, as in Bracket, each focuses on a cluster of bright color at their centers. The swirls of yellow, supported by bits of green and brown, could almost be taken as two bouquets of flowers, perhaps Van Gogh’s sunflowers that Mitchell had loved so much since her youth.

The elegantly installed exhibition at SFMOMA has opened just a week after two other important Bay Area shows, Judy Chicago: A Retrospective at the de Young Museum in San Francisco and New Time: Art and Feminisms in the 21st Century at the Berkeley Art Museum, both reviewed here. Together the three form a remarkable survey of contemporary art by women from the 1950s to the present.

Joan Mitchell runs through January 17, 2022, at the San Francisco Museum of Modern Art, 151 Third Street, San Francisco. The exhibition was co-organized with the Baltimore Museum of Art, where it will be on view from March 6 to August 14. The show then runs, in a somewhat different form, at the Fondation Louis Vuitton in Paris from October 5, 2022, to February 25, 2023. An extensive catalog is published by SFMOMA and Yale University Press.