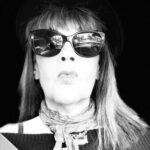 I touch myself so I can savvy what you rut in. Bring my fingers to my mouth, imagine you in our bed, returned from the three-day fray, redolent of the weight of the world, and me, your dirty, dirty girl, naked, eager, as you make your way down, breathing in my hair, my lips, the sweet spot where neck meets collarbone. I’ve made a religion of your fantasies, a science of what you desire. That ferine moan, my always startled gasp at first thrust. I angle, cocked hips, a bit askew. I arch for maximum penetration. Our bed is a rocket launch, a bacchanal, a pelican’s steep dive into the sea. For Michael, my first love, I used the freshening wipe before I arrived, so as not to offend. I spread myself wide on his bed, confident, watching the top of his head (black curls) as he explored me — that fear of not being Summer’s Eve™ fresh, worried my pussy might disenchant, the musk of me — all wiped away. He raised his head. Next time, Michael said, don’t wash.

I stood in the doorway and watched Davy fuck my sister by candlelight (he never fucked me by candlelight). Their shadows conjoined, elegant. I was touching myself under my robe when they saw me. Two against one, I turned down the hall, turned down a threesome again. I’d brought him home because he talked like Davy Jones. I’d always wanted to fuck Davy Jones. So I let him be British all over me. An Anglophile, my roommate younger sister blossomed like a petunia. I thought I was learning to share. But that last night, when the sirens raged and the dogs howled in the dark, when love had me (suddenly) by the throat and my sister swore she could take him or leave him, how could I ever believe her? Anything I wanted, she wanted. So when he ping-ponged between her bed and mine, I told Davy to wear a condom. I told him I didn’t know where she’d been. And when I finally begged Davy to make a choice, I watched his face carefully, ignored the implications of his sigh. She’s beautiful, your sister,” Davy said as he stroked my thigh.

Cousin Elaine from Chicago and I are naked

In the space between taking off our clothes
and putting on our swimsuits,

we stand naked.
My chest is flat as a board.

Her curves are already legendary,
her breasts bursting from her bikini.

I want to run my fingers along their goose bumped perimeter,
lick their chocolate tips.

I am 12 and shouldn’t think this way.

I shouldn’t think about her tanned legs thrown over mine on the couch,
nights when we watch TV, shouldn’t

think about the damp between my thighs
when she bunks with me at night,

when dreams of following her back to Chicago
consume my sleep.

In the pool, she’s a silver fish,
my body’s a heat-seeking missile:

“Marco!” she calls from the deep end, her
eyes shut tight.

“Polo!” I whisper in her shell ear.
When I reach for her she does not pull away.

When she kisses me, open-mouthed, I pull the string on her bikini,
free her breasts, bury my lips between them.

When I speak of this day in our far off future,
she’ll say it never happened, swear it was all a dream.