“All My Dead Say Grace”: Review of Unholy Heart by Grace Bauer

Because I could not stop for Death –
He kindly stopped for me –
The Carriage held but just Ourselves –
And Immortality.

Unholy Heart by Grace Bauer is an enchanting collection that captivated me from the start and never stopped. It is a “best of” book featuring selected poems from Bauer’s five published poetry collections, The Women at the Well, Retreats and Recognitions, Beholding Eye, Nowhere All At Once, and MEAN/TIME. Each of these books has its own section in Unholy Heart, and there is even an additional “New” section with 14 poems. What all the pieces have in common is that they deal with using a different perspective—and possibly a speaker who’s not the poet herself—to activate our empathy and as a means of clarifying our thinking about someone or something unlike ourselves.

One standout in Unholy Heart is the section pulled from Bauer’s collection The Women at the Well. In these poems, the poet takes on the persona of various women in the Bible, showing an uncanny ability to assume someone else’s identity, “getting inside their head” through empathy. These poems introduce us to the inner thoughts and emotions of a number of biblical women, as imagined by the poet. These women include Mary, Jesus’s mother, who turns out to be very human. Here is Mary’s voice, confiding:

Legend shows me acquiescent.
Don’t believe a word. I would have ignored
that angel if I could have…

(“Mary: A Confession and Complaint”)

And this is Mary’s honest appraisal of her son Jesus and her husband Joseph:

My son, though I knew he loved us,
was never affectionate. He moved
as if his body were not his own.
He had a cold distant look in his eyes,

And Joseph, though he was always kind,
and never doubted me, could not get close
to the boy. He grew more silent
with the years, more sullen.

(“Mary: A Confession and Complaint”)

In a different section of Unholy Heart, the poet explores the interior landscapes of a number of women artists such as painter/sculptor Georgia O’Keefe, painter Frida Kahlo, and photographer Diane Arbus. Some of the poems in this section are ekphrastic poems, little gems inspired by famous artworks. For example, one poem explores the woman depicted (or hinted at) in Marcel Duchamp’s Cubist Descending Nude. The speaker reaches the conclusion that this woman “…isn’t / a woman at all, but a machine….” (“Descending Nude”).

A third group of stand-out poems in Unholy Heart involves the speaker’s elderly father, whose gradual slide into poor health and death devastates the speaker. For example, the speaker in the poem “Father, Faltering” starts the poem with this observation: “I can picture it still—the first time I saw him fall. // Other stumbles followed.” In another poem, the speaker says, “For months we saw every bite he ate / as a triumph” (“Sustenance”). When her father’s death is close, she asks: “How do you know when to hang on and when to let go?” (“Fret”). And when it’s all over, the speaker addresses her father, “…I cannot make myself un-imagine / the moment of your un-being” (“Unspeakable Elegy”).

Overall, this poet has a bit of news for Emily Dickinson: “Death stops for everyone / and is rarely ever kind” (“Update on Emily”).

In the poem “All My Dead Say Grace,” Grace Bauer’s speaker recalls a dream she had:

My dead take their seats, join hands,
bow their heads, and whisper a word
that happens to be my name, which—
if said before eating means thanks.
Which is what I am trying to say to all my dead.

In response to this poem, I would like to thank Grace Bauer on behalf of myself and all my dead (my own father, mother, brother, and more) for writing such exquisite poetry. Like the poet’s first name promises, the inspiring, well-crafted poems in Unholy Heart are indeed graceful. They invite fresh insights and encourage understanding of and empathy for diverse viewpoints while avoiding preaching, cliches, and preconceptions. These poems reach not only the mind of the reader, but their heart and soul.

If it were up to me, I’d have to say: the world needs poems like these. 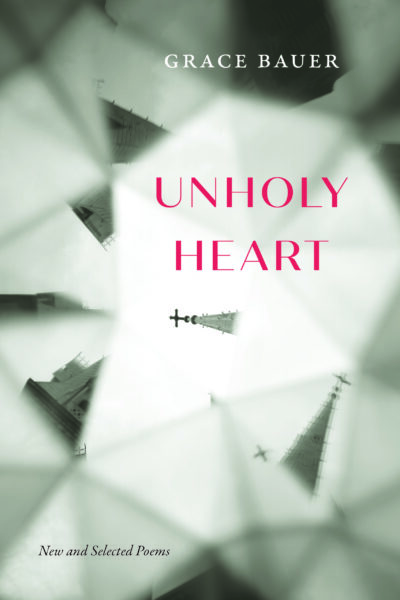 Eileen “Mish” Murphy is an editor, poet, book reviewer, educator, digital artist, and book designer. She teaches English and Literature at Polk State College, Florida. She just published her third book of poetry (fourth book overall), the collection Sex & Ketchup (Concrete Mist Press Feb. 2021-available on Amazon). Fortune Written on Wet Grass (Wapshott Press April 2020-available on Amazon) was her first full length collection. Her second book Evil Me was published August 2020 (Blood Pudding Press-available from Etsy). She’s had more than 100 individual poems published in the U.S, Canada, and U.K., in journals such as Rogue Agent, Tinderbox, Writing in a Woman's Voice, and Thirteen Myna Birds. She is a prolific book reviewer, with reviews published in Cultural Weekly, the Los Angeles Review of Books (Blog), Raintaxi, and many others. Her award-winning art has been widely published in journals, magazines, and e-zines such as Peacock Journal, Thirteen Myna Birds, and The Thought Erotic. She also illustrated the children's book Phoebe and Ito are dogs by John Yamrus (2019), creating 60+ pages of artwork to accompany the story (Epic Rites Press-available on Lulu.com). Mish's award winning artwork has been shown numerous times in shows and competitions in New Mexico, Florida, and online.