An Interview with Michael Torres

Michael Torres’s An Incomplete List of Names was one of the most exciting collections to come out of the Inland Empire last year, but Torres, has moved from Pomona to Minnesota, where he works as a professor at the University of Minnesota, Mankato. The idea of place, where he is from and where he lives now, is crucial to this collection, so I wanted to ask him about this aspect of the collection and how it helps to form his poetic identity. 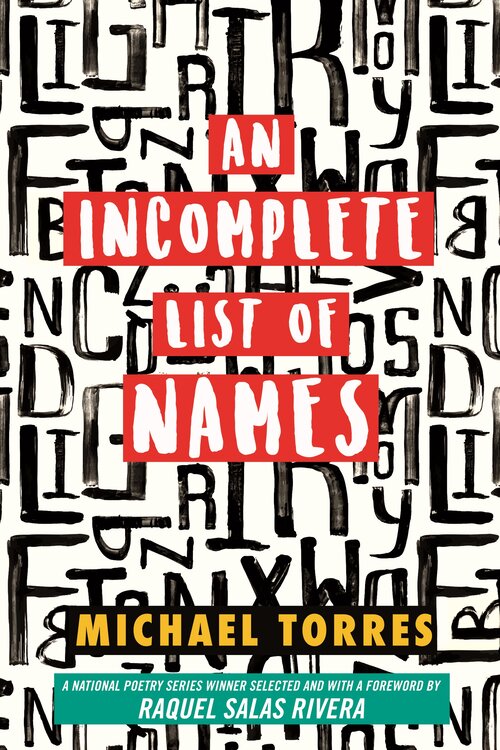 John: For me, one of the most interesting parts of your collection is how you take Pomona everywhere with you. It is a part of who you are as a poet and a person. Now that you’re not living in Pomona, I’m wondering how this dynamic is shifting. Is Minnesota becoming part of your poetic identity or is your writing in some way in resistance to this place you’ve moved to?

Michael: I’ve only recently begun writing more deeply with what I recognize as a Minnesota influence, so in some ways, yes, it’s becoming part of my poetic identity now. For a while there was a lot of resistance to this identity, though, which was rooted in my loyalty to home. California, and specifically Pomona, is not simply the place but who I was there. What I’m in proximity to colors who I am. In California, and as a younger self, everything was concrete and brick and fencing and summer sun. It was traffic and house parties and hanging out on the sidewalk in front of someone’s house. That’s a lot of what’s in the collection. Living and writing in Minnesota now, the seasons play a huge role. The geography, too, which is so unlike California. We have corn fields and soybean farms. There’s a lake by where I live. Like, I can walk five minutes and be there. If it’s January, kids are ice skating on it. Five minutes in the other direction and I’m on a path beside the Minnesota river. If I’m not as resistant to writing about Minnesota as I was when I first got here it’s also partly because I’ve learned a bit more about this place, and have begun to understand myself in it. The week I first moved here in 2013, I remember going for a walk downtown. It was summer. August. Above me, around me, there was a constant buzzing, and I kept looking around for powerlines—industrial things I was familiar with. Later someone told me those were the cicadas.

John: You also carry with you the identity of REMEK, which is your tagger name. To me, there is an authenticity to REMEK, and I might be wrong about that, but I’m wondering if REMEK represents a deeper, more authentic self that you show only when you want to get to a deeper, more authentic level of poetry. I’m wondering if he is the youthful interior to Michael Torres’s exterior.

Michael: Your very much right. REMEK is rooted in my youth, which was a very complicated and crucial time for me and my self-identity. I was a sensitive kid who always liked to express himself through art. When I was a teenager being brought up in a hyper-masculine Mexican-American culture, becoming REMEK the graffiti artist—spray-painting walls and running from cops—was the narrow avenue I found that allowed me to nurture my creative side while simultaneously being “down for whatever” or tough, as many of my homies were/thought they had to be.

REMEK was also an identity I could retreat into. Graffiti came into my life at a time when I didn’t feel encouraged by high school faculty, staff, or administrators to go to college. All around me, though, it seemed that my peers had already had someone help them plan their futures. It’s true that my own family really pushed the idea of going to college, but at school, I don’t really remember anyone asking me about dream schools and SATs and all that. And that, obviously (because I’m bringing it up now), stuck with me. On top of the support I wasn’t getting at school, none of my homies talked about college so it didn’t seem like somewhere I should be concerned with. REMEK was not only how I nurtured my imagination and creative self but how I could pretend the future didn’t matter, or rather, how I could put all my energy into the now, into graffiti and friendships. In those ways, REMEK was built for resilience. Sometimes I think REMEK is way more durable than Michael Torres is. Maybe that’s why, when I sign my book, I cross out my name and put REMEK over it.

John: This expression of multiple selves seems to go beyond code switching. There is something meditative about it. Of course, several of your poems contain the idea of code switching, but there is something more. Is An Incomplete List of Names a discussion of the multiple Michael Torres’s that you must carry around with you especially now that you are gaining new identities as a professor and father?

Michael: I love this question! Yes! I definitely see that in my speaker. I think of most poems in my collection as a sort of unravelling. My speaker, tangled in an understanding (or misunderstanding), grapples with which self to honor/be loyal to at a given moment. The sensitive self, the built-to-be-tough self, the professor, the poet, etc.? This unravelling is all, of course, a consequence of code switching. The poems then recognize and/or reckon with the complications of that multitudinousness.

I want to say, also, that there’s this Carolyn Forché interview on the First Draft podcast I’m thinking about right now. In it she talks about how she believes there’s no such thing as aftermath, at least not how society uses the term. She says that we’re living in the aftermath, at all times. Every joy and sorrow, she says, we carry with us—that we never get past anything, fully. I think that explains why, as a professor, I aim to run my workshop with a focus on community and the trust and support I had as a graffiti artist who went to his homies with a new style, looking for feedback. I’ve been REMEK way longer than I’ve been a professor so it makes sense that I’d seek the help of another self for a newer self.

Tags:
Previous Article
The Book of Anna
Next Article
Karaoke Therapy: Surviving the Pandemic One Song at a Time