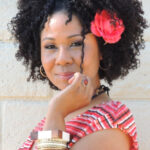 There’s a provocative horror movie out there examining the viral spectacle of white women who surveil, harass and police black folks simply for existing.

Karen is not that movie.

Recently released by BET Original Movies, Karen posits that even after 2020’s racial reckoning, black people still have to prove our humanity, a timely message overshadowed by the film’s heavy-handedness. The opening shot is of the words Black Lives Matter drawn in chalk on the street, which the titular character immediately dashes with a bucketful of water and proceeds to scrub away.

Written, produced and directed by Coke Daniels, Karen starts with an intriguing premise: A young upwardly mobile black couple, Malik and Imani, move into a posh suburban Atlanta neighborhood and are planning to start a family. Unfortunately for them, their next door neighbor, Karen Drexler, is a racist with a chip on her shoulder. She terrorizes them daily in the hopes of forcing them out of her community, which, incidentally, is named Harvey Hill, after the Confederate general.

Over the past several years, “Karen” has bum-rushed its way into our lexicon to describe entitled “I need to speak to the manager” white women who are self-styled gatekeepers not only of public spaces but of white supremacy and patriarchy. Karens are an extension of the surveillance state. They stand sentinel at community swimming pools and at gated apartment complexes, demanding compliance, identification and “papers” from people of color trying to gain entrance. These encounters often end with Karen calling the police because she “felt threatened.”

In the movie, we understand early on that Karen Drexler is a woman in authority. As president of the HOA, she believes not only in following the rules but in being the sole arbiter of how they are carried out. As Malik is leaving for work one day, she chides him for not taking in his garbage cans immediately after the trash is picked up. Her first act of surveillance is installing a security camera that directly faces Malik and Imani’s house, which she makes a show of adjusting as the couple stand in their driveway. Karen has appointed herself a one-woman neighborhood watch, protecting her community from outsiders.

Karen’s surveillance tactics are not limited to her neighbors. While having lunch with a friend, she overhears two black men laughing and being “unruly” at the next table. Because they don’t “comply” with her request to keep it down, she promptly calls the manager and has them kicked out of the restaurant. On another occasion, Karen spies three young black men approaching while she’s picking up trash and asks to see their ID. One of the teens responds in irritation that he lives in the neighborhood. Karen expresses disbelief and calls the police, crying on the phone that she’s “really scared.”

The latter scene echoes the story of Amy Cooper, known as the “Central Park Karen,” who called the police on Christian Cooper, a black man who was birdwatching in the area. Amy allegedly told Christian before calling 911, “I’m gonna tell them there’s an African-American man threatening my life.”

The movie makes an important point that historically, white women’s tears have had deadly repercussions for black men. Emmett Till was lynched in 1955 when Carolyn Bryant accused the black teen of whistling at her, a claim she later recanted. Karen weaponizes her tears against the three black kids by invoking her purity and innocence while on the phone with the 911 operator, pleading for help as the teens regard her damsel in distress act in disbelief. Help comes in the form of the police, who promptly profile and arrest the black teens – all on Karen’s word.

Karen Drexler is able to terrorize her neighbors with impunity and any other black person unfortunate enough to cross her path because she is empowered by the knowledge that her whiteness will protect her. Her late husband was a cop, as is her brother, Mike, who claims to be untouchable because “the brotherhood takes care of its own.” Karen is literally and figuratively married to the law.

In spite of Karen’s racism, disguised as social awkwardness, Imani attempts to befriend her. Karen comes over for a housewarming party and is the only white woman there. When the discussion turns to police brutality, her thinly veiled bigotry leaps out.

“They shot the man six times just for reaching for his wallet like his life didn’t even matter,” says one party guest.

“Black lives matter,” says Justice, Malik’s friend, who happens to be one of the men ejected from the restaurant. When Karen “All Lives Matters” the conversation, Justice rejoins with “All lives are not in danger any time there’s an interaction with law enforcement.” Karen dismisses his anger and lived experience, stating, “I come from a family of law enforcement and I know that bad things happen to people who don’t comply.”

At the heart of true horror are the human monsters who terrorize us and our fears about the ways they might disrupt our lives. In spite of the salient points the movie makes about issues of compliance and surveillance, Karen never felt truly frightening to me because the racist woman at its center was a laughable Frankenstein’s monster stitched together by memes and outlandish dialogue. She’s played by Taryn Manning, who starred as beloved redneck Tiffany “Pennsatucky” Doggett on Orange is the New Black. With her stiff wig, faux pearls and day-drinking soccer mom mannerisms, Manning starts at 100 and only revs up her fervor from there. Her performance is giving Baby Jane Hudson meets Annie Wilkes, complete with smudged mascara, wide eyes and perverted innocence.

My biggest beef with the movie is its lack of nuance and binary representations of black and white people. The filmmakers lay the respectability politics on thick. Malik and Imani are the “good ones.” Malik runs a community center and STEM program for at-risk youth and Imani is a successful blogger, who wears locs, Afro pick earrings and kente cloth. “You are a strong, beautiful, intelligent and woke black man, which is why I married you,” Imani gushes to her husband. Karen is obviously the bad one as evidenced by her Confederate soap dispenser and framed photos of Confederate soldiers in the guest bathroom. Imani and Malik rarely exercise any agency in their interactions with her. They merely serve as reactionary targets of Karen’s intolerance.

The screenwriter isn’t interested in exploring what makes Karen tick. We learn that her husband was killed by a black vigilante, which could explain her irrational hatred of black people, but this revelation comes at the very end of the movie as an aside. Karen also divulges to Imani that when she was a child, her family was the victim of white flight. “I do have an ax to grind with you people,” she says through tears. “When I was a little girl, we got pushed out of our neighborhood when the whole crack epidemic started. I don’t have anything personal against you and your husband. I just think you guys need to move.”

Karen Drexler’s audacity and expectation of deference is stunning and most of her acts of aggression are against black men. Yes, many viral videos show entitled, combative white women harassing men of color and denying them access to public spaces. What’s not being captured on film is the emotional harm Karens inflict on black women. To me, a Karen horror movie would not be complete without interrogating how privileged and entitled white women engage in microagressions – in the workplace, in schools and in social settings – or outright bully and attempt to silence women of color who dare challenge their complicity in systemic racism.

Like many black women, I have my own Karen story. She was a former coworker whom I shadowed for a week as part of my job training. I knew early on that she didn’t like me but I couldn’t pinpoint the reason. When I learned she was a fellow writer, I tried to make small talk about her work, which she blew off with one word answers. She let it be known that she just wanted to train me and didn’t care to know me as a person. You don’t have to be besties with the people you work with, but I always got the feeling that she didn’t see me as fully human. Most of her responses to me were curt and patronizing, giving big “Per my last email” energy. She talked over me in meetings, cut me off when I asked questions or dismissed me outright. Whenever she pulled me aside to address a mistake I made, her tone was cold and patronizing, as if scolding a child. Many days I sat in my cubicle in tears or went out to my car to cry, and I am crying now as I type this, remembering the anxiety and dread I felt walking into work each morning and how angry I was at myself for not having the courage to confront her. One day I broke down and called my manager to tell her about the emotional abuse I had endured for several months. When confronted, the coworker denied any wrongdoing. I felt like she was gaslighting me, as if her cruelty and condescension was all in my head. This workplace Karen never called the cops on me, but she still unleashed verbal batons of brutality.

As journalist Ruby Hamad writes in White Tears/Brown Scars: How White Feminism Betrays Women of Color, “The act of being challenged or politely disagreed with or, heaven forbid, called out by a woman of color about almost anything at all is enough to raise the defenses and trigger a reaction based not on the immediate situation but on the mechanisms of white fragility.” Hamad goes on to say, “The insidiousness of strategic white womanhood is that it masks power. It is power pretending to be powerless.”

In the movie, characters frequently invoke the phrase “Black lives matter.” It’s a way to remind themselves and the audience of our humanity and right to exist, in spite of society’s mistrustful gaze. It’s a way to reclaim power from the ones who police us, defiantly inscribing our names in the concrete, even as Karen lurks with her bucketful of water to scrub them away.

View Author Archive
Nicole D. Sconiers is the author of Escape from Beckyville: Tales of Race, Hair and Rage, a speculative fiction short-story collection that has been taught at colleges and universities around the country. Her short story “Kim” was published in the anthology Sycorax’s Daughters, which was a Bram Stoker Award finalist. Her short story “The Eye of Heaven” appeared in the anthology Black from the Future: A Collection of Black Speculative Writing, published by BLF Press. Ms. Sconiers was a guest columnist for Nightmare magazine’s The H-Word. Her short story “The Stiffening” appeared on an episode of NIGHTLIGHT, the black women’s horror podcast. Her work has appeared in Lightspeed and Speculative City and will be included in an upcoming episode of PodCastle. Her short story “Epiphany” will appear in the forthcoming horror anthology December Tales, published September 2021 by Curious Blue Press. Ms. Sconiers currently resides in Pennsylvania, where she is working on a collection of horror stories and a horror podcast.