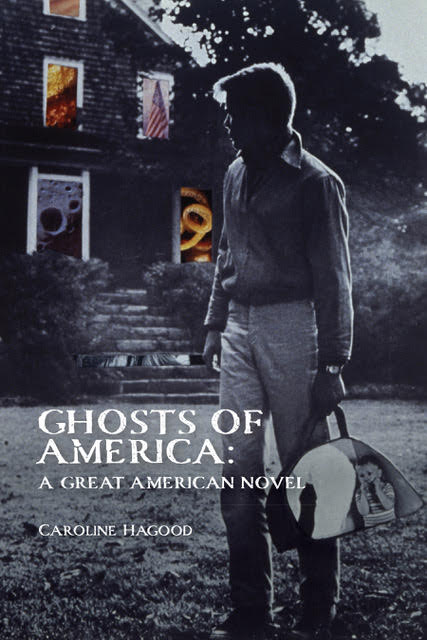 Ghosts of America: A Great American Novel by Caroline Hagood

Caroline Hagood is a writer, poet, and professor whose debut novel, Ghosts of America, exemplifies these interweaving aspects of her identity. I have known her work and followed her on Twitter. To say I was excited about the publication of her new book is an understatement.

As a writer, Hagood imbues Ghosts of America with a multiplicity of voices. There is the voice of the protagonist, Norman Roth III, aka “Herzog,” a Vietnam War veteran-turned-writer and professor. He knows the power of narrative, both in terms of how it is used to subjugate others, particularly in the way his-story is created, and how for writers such as himself, narrative is used to entice, use, and abuse women. Herzog ultimately builds his empire (i.e. his writing and academic career) on misrepresenting the women in his books. Because of his self-absorbed and egocentric intelligence as well as his position of power, Herzog’s sexism is the most dangerous kind.

Then there are the voices of the two women whom Herzog wrote about in his books: Jackie Kennedy and Valerie Solanas. They represent the two extremes of womanhood: Jackie is the nation’s darling, the seemingly cherished wife of President Kennedy and beloved mother to his children, “the good woman”; Valerie is the mad woman in the attic, misunderstood, “bad,” on the fringes of society. Both kinds of women are unable to escape the pervading male gaze and misogynistic narrative that is entrenched in our culture.

In Hagood’s writing, however, Jackie and Valerie are given a platform to speak their minds and tell their stories. Their voices take over, haunt, and possess this book. They speak back against Roth and the tradition of men writing about and mis-representing women.

Hagood’s sentences are clean, crisp, and clear. Her voice is smart, at times funny, and always passionate. There is a strong poetic sensibility to her storytelling. Images abound, both beautiful and haunting.

Take, for instance, this scene where Jackie Kennedy is sitting next to her husband’s coffin as a caravan of C.I.A. vehicles makes its way to Air Force One:

“I sat next to Jack’s coffin, not wanting to leave him alone, even though he was already gone. It didn’t feel that way. I felt like he was sitting next to me, though another part of me knew otherwise. But the two parts refused to speak to each other.”

This is a haunting image of grief and trauma, where the self is split psychologically in two, broken by the violence of the world, unable to reconcile with a painful reality.

Not only is Jackie’s pain made visible, her dreams and aspirations are also made palpable in Hagood’s conjuring hands.

When Jackie speaks, we listen. Her voice is the loudest in this novel. She tells Herzog (and by extension, us) that she wants to be a photographer, not a photograph; a writer, not the subject of someone else’s writing; a person, not “a stock to be traded, property.” She doesn’t want to be someone’s wife, trapped in domesticity. “I wanted to inhabit a larger sphere than mere womanhood…I even considered joining the CIA.” In short, she wants to be the architect of her own life.

As a professor, Hagood is knowledgeable, encyclopedic in her understanding of literary and cultural history. In the novel, there are plenty of references to popular culture, stories and myths, writers, poets, and playwright, as well literary theorists, feminist and cultural studies scholars. Hagood aims both to tell a good story and to instruct.

As its title indicates, the novel is ultimately about reckoning with our nation’s past. Jackie Kennedy tells us, “Everyone knows the White House is the most haunted house of all. It’s haunted by American history. . . .” Ghosts are a representation of our nation’s past injustices. There are the ghosts of slavery and empire building; ones that Toni Morrison makes central in her historical novel Beloved. There are the ghosts of genocide and the indigenous peoples of America that writers such as Louise Erdrich and Joseph Bruchac explore in their work. Then there are the ghosts of women that America as a culture and nation have made to feel disenfranchised, alienated from their bodies and dispossessed of their minds (such gendered haunting can be seen in the recent Texas law on abortion); and this is where Caroline Hagood shines, where she does her reckoning.

At the end, the novel gives us a glimpse of beauty and magnificence if only, Hagood tells us, we could unshackle ourselves from past and current prejudices and live a life of freedom and meaning. Herzog, who has undergone a transformation at the novel’s end, experiences this majestic moment:  “Now, even if just for a moment, here it was at last, and I recognized it. It was a sense of the sublime: the sharp inhale, then heart flutter, then a shot of warmth, then some kind of quiet.”

Tags:
Previous Article
Lessons to be Learned #1 – The Challenges and Wonder of Childhood
Next Article
Raúl Juliá remembered