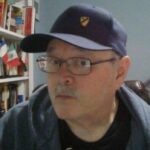 Catfish McDaris is the author of Prying with Jack Micheline and Charles Bukowski. He’s done over 20 chapbooks in the last 25 years.

Cultural Weekly is proud to premiere the following poems by Catfish McDaris.

Gazing at Prince play a solo with 3rd Eye Girl
feeling a cat brush and rub against my bare leg
getting a half laugh smile from my daughter
when my lady of thirty years kisses my bald spot.

The Revolution Of Love

When my lady is happy, singing
in Spanish and French and I smell
the perfume of Mexican vanilla,
cinnamon, cloves, cilantro, and sage

The cats are purring on the bed
and the snow is melting and chives,
garlic, daffodils, and grapes are
looking at the sun with love

I smile inside I no longer care how
much money I have or owe, or that
I don’t drive or my hair is thinning or
that I’m closer to death than life

I put another quarter in the parking
meter, laugh at the shadows and think,
my turn to pull the rabbit from the hat.

Another Hole In The Universe

Change my name to December Q. January and
swim in the Sea of Tranquility and to the bottom
of the Mariana Trench and find a mermaid harem
and send up poems in bottles and never come back.

View Author Archive
Catfish McDaris’ most infamous chapbook is Prying with Jack Micheline and Charles Bukowski. His best readings were in Paris at the Shakespeare and Co. Bookstore and with Jimmy "the Ghost of Hendrix" Spencer in NYC on 42nd St. He’s done over 25 chaps in the last 25 years. He’s been in the New York Quarterly, Slipstream, Pearl, Main St. Rag, Café Review, Chiron Review, Zen Tattoo, Wormwood Review, Great Weather For Media, Silver Birch Press, and Graffiti and been nominated for 15 Pushcarts, Best of Net in 2010, 2013, and 2014, he won the Uprising Award in 1999, and won the Flash Fiction Contest judged by the U.S. Poet Laureate in 2009. He was in the Louisiana Review, George Mason Univ. Press, and New Coin from Rhodes Univ. in South Africa. He’s recently been translated into Spanish, French, Polish, Swedish, Arabic, Bengali, Mandarin, Yoruba, Tagalog, and Esperanto. His 25 years of published material is in the Special Archives Collection at Marquette Univ. in Milwaukee, Wisconsin.