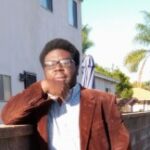 Chad Grant: \”Letter to My Niece\”

I sit here in my four cornered room and meditate on the rhythms of John Coltrane’s A Love Supreme as a white man’s face peers back at me from my computer screen. I cannot say just when it was that I began…could it have been the fact that as a child I was made fun of for my full lips, kinky hair, and dark complexion? Kids would come up to me in their innocence and want to pet my hair as if I were some sort of oddity—a freak of nature. I was often compared to some Black person that they had seen on a Saturday morning cartoon.

As a young adult, the relentless search for identity hadn’t ceased. I was either too dumb or too morose to look into the mirror and see the beauty which was me. I was either too big, too black, or both. Folks, usually white males, would come up to me and ask if I was an athlete when my real passion was for writing, for no big black man could ever be a writer. I can see a trend in my life which developed at an early age, for I was a rebel.

When I was in the first grade, I believe, I had just seen the movie Malcolm X directed by Spike Lee and was floored by Brother Malcolm’s passionate campaigning. I was willing to do the same myself, drawing in the young brothers and sisters from my school (there were only three of us all together), and assembling the Black Club. Max was one of the student’s names and his sister whose name escapes me for the moment.

When I was a bit older, the process of assimilation continued, still with the taunting, still with the white washing of history and so forth. I had a teacher who taught us from some antiquated history book with a black boy eating watermelon under a table, another with a boy running with a chicken tryin’ ta git away fum ol’ massa Tom.

When I showed these photos to my father he was absolutely appalled. Not only did these photos depict Blacks in a negative light, not only did the history books given to us give Blacks the back page, but they whitewashed the history of America; to be honest I’ve learned more about Black History on my own than through any school. I entered high school, my first year, at a predominately Afro-American school and even then I was told I was much too “white,” that I spoke “white.” I still get this from blacks as well as whites alike.

What is to be done? I know deep in my heart that I am a Black man, steeped with a certain sense of pride.

I know I don’t want you, my niece, to grow up hating your Black skin just because someone tells you you\’re not pretty or your hair is too kinky or your lips are too big.

Harper, you are beautiful just the way you are. I pray that one day you will grow up to be a proud Black woman. Look to the mainstream media with all of the vitriol hatred you would corporate America, and read between the lines. Use critical thinking, read, but don’t make books your world. Explore life and seek truth out for yourself. I pray the America you grow up in will only get better, I can only pray.

And as Coltrane puts the final touches upon his magnum opus I draw to a close. It’s time for bed.