Collected Nightmares of the 13th Century — The Male Gaze, Trauma, and John Proctor

Even over my unstable Zoom connection, Kathryn Valentina is immediately bewitching. She has the frenetic energy of a young, queer anarchist, and a ‘Fuck Ronald Reagan’ poster to match.

“I drew a cat on it,” she says, gesturing with one lanky arm. “It’s the cat from the meme.”

K.V. calls out to me as a brave child attempting to reclaim herself—one who corrects herself when apologizing for talking too loud, adjusting her posture when she curls in on herself in anxiety.

“No—no, I’m NOT going to apologize for talking too much,” she announces, overly dramatic to cover the ever present fear.

“I’m interviewing you,” I remind her. “Please talk too much.”

K.V. is uncomfortably old in a way that betrays her queerness, her trauma, and the fact that her grandparents helped raise her. Her middle school poetry finds her sipping cider in hay bales before the gallows, even while pondering the dark screen of her phone.

“I definitely have a chip on my shoulder where I think no one has ever felt this way before. I’m always shocked when people say it’s relatable—like, what, me? Relatable?” She laughs. “And then it’s like, I’m so sorry you related to that because it means you are in so much pain….”

This is your first solo album. How did it come about?

[The album] was originally 12 songs [written] over the last five or six years…some of them just weren’t who I wanted to show. This was definitely difficult, but it feels a little exposing—no, not a little, REALLY exposing. With this, it’s so much more—like, people get to construct more of what it means and who I am.”

Track 1 is entitled “Scopophobia”—the fear of being stared at…

“Scopophobia” has been rattling around in my head since I was maybe 13. Living in Baltimore City, people were very brazen with street harassment and, in a way, just their eyes. 12 or 13 was the first time I got catcalled. Throughout my childhood, I was hyper aware of being looked at, of how I was coming across to people. This obsession of—‘Are you attracted to me? Do you like me? Can I be pretty enough?’ And the answer is always no. 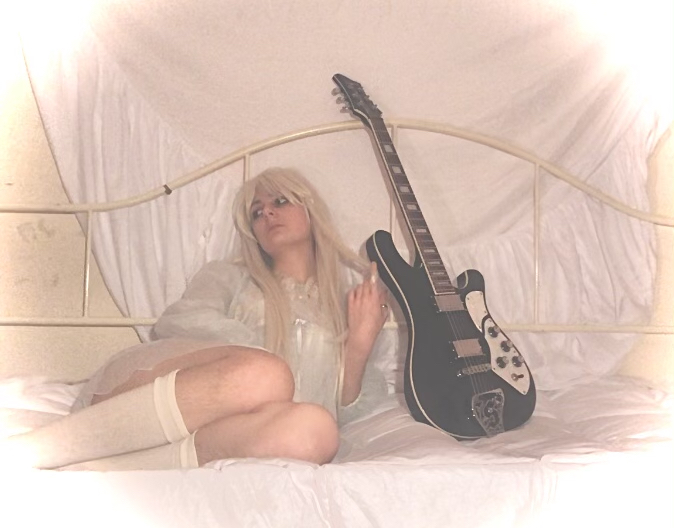 My mother didn’t really raise me with anything—she didn’t have time to instill the fear of God in me and she’s much more into free-form spirituality. My great-grandmother who I spent a lot of time with, she was some kind of Slovak Catholic but she never really tried to get me into it either. But somehow, since I was young, there was this obsession with forgiveness, and this incessant guilt, that I only ever really see reflected in Catholicism. [Thus the lyric] “…I wish I could be something worth forgiveness.”

You refer to yourself as a “thing” a lot in these songs—something worth forgiveness,” “the bedding,” “useful,” “body into a stage…”

I feel like a lot of times when I’m having conversations…I do sort of leave my body a little bit. I sort of feel like a prop. Maybe that is partially the trauma of being raised female—and also breaking away from that, you know…idea of usefulness. What am I in relation to you? If it’s just me, if all I have is me, I’m nothing. What am I? Nothing but a prop next to something better, or something more worthy.

You started as a poet. Where did your musical language come from?

When I was a kid, my family would rent a little beach house—I must have been three or four—and I said to my grandpa, “Grandpa, did you bring your kitar?” Finally, my grandmother said to my grandfather, “Guitar. She wants you to play your guitar.” When I was about ten, I tried to get him to teach me guitar. And he refused, but I insisted, and he tried to teach me some theory and stuff.

It wasn’t until—I had been writing poetry all throughout middle school, which is the strongest reason I felt confident putting any of this to music. My mother also makes up a lot of songs absentmindedly and has always written lyrics and poetry for herself.

It wasn’t until my friend in high school started doing music stuff that I started thinking, “Maybe I can do something with this.”

What is the danger I see in peace?

The love songs in this album are so painful…

After that whole mess with [REDACTED] it completely called into question—just—what does it mean to love? How do people do this? Over and over again? In so many situations, I was insane. I was nuts. I was just obsessive and—invested so much of myself that coming out of it was this whole…it had to be this rebirth. What was I doing there?

How would you describe your love language?

Especially in my relationship to my partners and my friends, it’s interesting because my mother is a very, like, acts of service, gift giving, “I picked this up for you, I made this for you, I cut up some fruit.” It’s a request to be loved in return. If you accept this, you accept a portion of my love. It’s more of a question than anything else, but in my interpretation, it’s more of an insistence. I find that if I refuse, I’m refusing to let my friends suffer in the same ways…that I suffer. I’ve found that in this reinvention of my love, it’s more of an insistence of…if you want to love me, if you want to accept my love, part of that means that I’m not gonna let you do these destructive things to yourself.

So when it comes to my love for my friends, I find that it’s very, “What are the basics of what you need?”

That type of usefulness that comes out in that relationship is so much more of a request to understand that the little things like the birds singing to you, the bedding underneath you—these things, as much as they are considered “luxuries” to enjoy, they are necessities for people that feel like they need to deny themselves goodness.

Am I allowed to be happy right now?

The first week my album came out, I was so happy. And then I was trying to find issues.

What is the danger I see in peace?

What is this craving of tension and chaos? What is that?

There’s a lot of eyes in this album.

I had a conversation with [my friend] about like—gaze, and staring, and stuff. I find myself staring a lot. I think this is particularly true for lesbians and the general LGBT experience. It’s this moment where—it’s about watching rather than being watched. I’ve been holding onto that kind of feeling.

A lot of these songs are looking at the image of you looking. Like that line, “I’m haunted by the image of us sitting in the hay sipping cider.”

Speaking of, John Proctor? “The Crucible”?

I would love to write another song from the perspective of Abigail, this scorned, vengeful teenager—been there, I mean, damn—

There were a lot of little lines that gripped me—in the fight with John—“no it’s my fault that this happened, it was a cold house I kept” or something.

Also, him begging for forgiveness, or needing that. I felt this kind of weird connection to John Proctor because in my head I was like—this is a man I could forgive. When I wasn’t seeing that in front of me. It’s the violence of being a woman and constantly having to  forgive…Something about him – about the ending where he was saying to them, “Listen, I fucked up, okay, but I’m willing to die because of whatever guilt I’m holding onto…”

I’m forever fascinated by the way musicians organize their albums.

It was really difficult! Norvin Van Dunk wanted “A Pretty Portrait” to be first.

[Off of my look of confusion]

Yeah, I disagreed as well. It’s the most ordinary, musically speaking. I’ve been sitting on “Scopophobia” so long—I had to lead with that.

The one I had the hardest time placing was “Father of You.” That’s the most recent solo song that I wrote. It’s so painful, and so exposing. And that was my biggest fear. My mother and grandmother wanted to listen to the album with me, and I was like, “We can skip that one! We can skip the last song!”

And I still do, despite logically understanding that nothing was my fault…I still hold myself responsible, I really do, for what happened to me and what happened to the other girls that he was involved with.

And there’s so much in those little lines…I feel so transparent. I feel so transparent all the time. I thought ending with “Father of You” was, in a way, kind of, like, slipping it in there—which is not true, because you’re ending on it but it felt like I was slightly hoping no one would make it that far or listen enough to the end…but with the reality of the weight of it, I can’t handle having anyone hearing this and then listening to another song. Even including the take where my voice is choking up at the very end is a deliberate note to the desperation and agony of recording it.

The last line of the album is “One day I’ll pay for all of this. I promise.” It almost felt like an act of contrition, or penance. Was this process healing?

[The process] was something.

Opening with this—this general eyesight, the general vision that is perpetually on all of us. And then it was narrowing down and getting closer and closer to this cataclysm of sight, and, um, notions of being understood, and seen….

When you let someone see you…

Is there another solo album on the way?

That’s a good question. I think so. I think there very well could be.

I’m absolutely obsessed with my band—we don’t even have a drummer, and I’m like “we’re the best things to ever grace this side of the coast.” I’m trying to incorporate them into everything I do from now on. Or [deciding] if it’s enough that it’s just me.

This whole thing felt like an exorcism, in some way.

[The readers will be like] “I don’t think I can handle that. Listen, I got work in the morning. I don’t know if I can interrogate my existence right now.”

Collected Nightmares of the Thirteenth Century was recorded in Nyack, NY with Tron the Archer at The Archer Lounge. It can be streamed on all available platforms.

MEOW MEOW’s EP Hell Is Real was recorded in Nyack, NY with Tron the Archer (Norvin Van Dunk) at The Archer Lounge. It can be streamed on all available platforms following its release on July 30th.

“A Deadbeat Laments” is MEOW MEOW’s first released single from the EP, and is available on all streaming platforms.

One day I’ll pay for all of this. I promise.

Liggera Edmonds-Allen is a transgender actor, producer, and advocate. They study dramaturgy at Carnegie Mellon University.

1
Tags:
Previous Article
New to Online Casinos? Here’s How to Get Started
Next Article
Where Is Kelley?