Connecting the Dots Between Calder and Picasso

Alexander Calder and Pablo Picasso are both titans of modern art, one known almost exclusively for his light, airy, constantly shifting mobiles and the other for his dizzying succession of styles.

Calder (1898-1976) spent his career refining a few simple ideas, creating form and volume from thin lines and planes, working mainly with twisted wire and sheet metal. Picasso (1881-1973) was an omnivore, moving from his early Blue and Rose periods to Cubism to neoclassical realism to Constructivist sculptures made of found objects.

The two artists met only a few times, most prominently in 1937 when their works were both exhibited at the Spanish Pavilion of the Paris World’s Fair. Yet their grandsons, Alexander S.C. Rower and Bernard Ruiz-Picasso, saw a deeper connection. Working as co-curators, the pair explored the art of their grandfathers first in a 2016 gallery show in New York and more recently in “Calder-Picasso,” a full-scale museum exhibition that debuted in Paris and Malaga, Spain, in 2019 and 2020 and recently opened at the de Young Museum in San Francisco.

The show features a handful of Picasso works that arguably can be called masterpieces, including his Reclining Nude of 1932 (top image), a swirling, voluptuous portrait of his lover Marie-Therese Walter. The brash, colorful painting, similar in style and using the same model as his famous Girl Before a Mirror at the Museum of Modern Art in New York, would seem cartoonish if it weren’t done with such assurance. Even the wallpaper seems to sizzle.

Other Picasso highlights include a fine series of 11 lithographs of a bull — ranging from a brawny, realistic portrait of the animal to a barely sketched abstraction — and a sculpture of a bull’s head cast from a bicycle seat and handlebars. Yet many of the other works seem less inspired, something he knocked off in an afternoon, more decorative than thought-provoking. 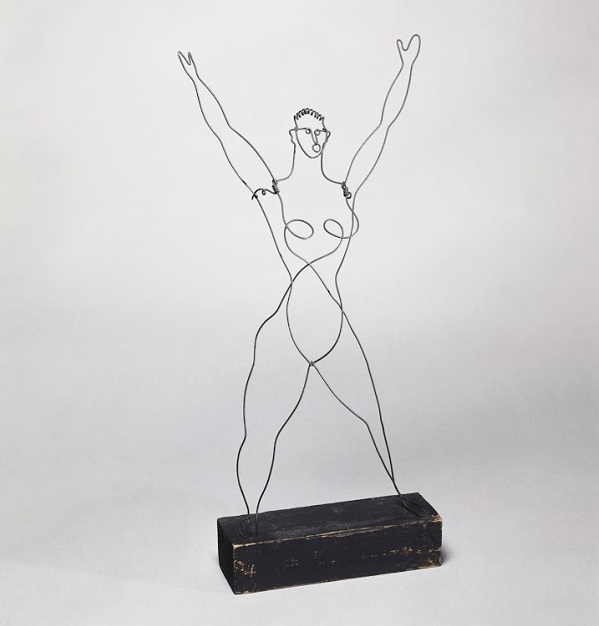 Which may explain why the show is called “Calder-Picasso” and not the other way around. Calder’s wire sculptures from the 1920s and 1930s, for example, are a revelation. “Acrobat,” made in 1929 from what appears to be a single length of twisted wire mounted on a wooden base, depicts a muscular, nude woman raising her arms triumphantly above her head. It’s a sculpture that looks like a drawing. It’s both solid and empty, and it’s a masterpiece of concision.

Picasso, like Calder, was obsessed with the circus, so visitors are also presented with his “The Acrobat” of 1930. Picasso’s painting shows a bent-over, cartoonishly contorted white figure on a dark gray background. The anatomically impossible body, a victim of Cubism, sports a head attached to an upper thigh. It’s a puzzle, more decorative than meaningful. 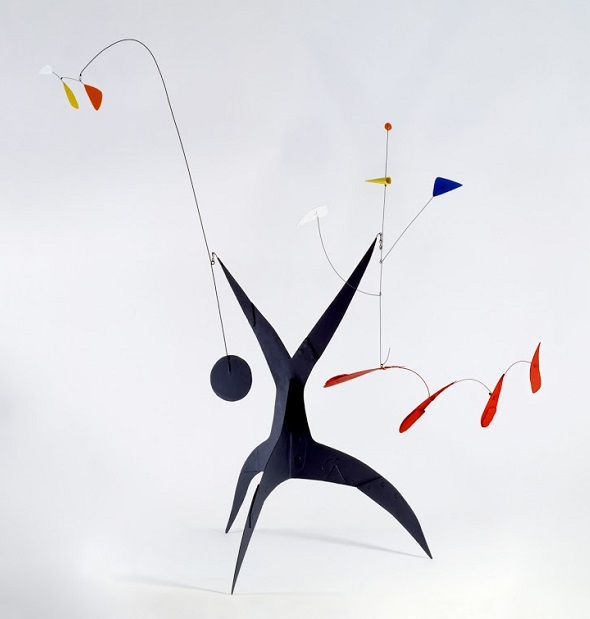 For Calder, the main attractions are the mobiles. An untitled work from about 1942, above, features a black sheet-metal base with three legs and two upraised arms, a pose reminiscent of his wire Acrobat. Each arm holds its own wire mobile with red, yellow, blue, black, and white discs attached. The cluster of four elongated red plates on the lower right remind you of a school of fish, while the upper part evokes a sketchy tree. The long wire arm on the left balances a circular black plate against three smaller triangular discs in red, yellow, and white. It all hangs together in perfect balance, both visually and physically. 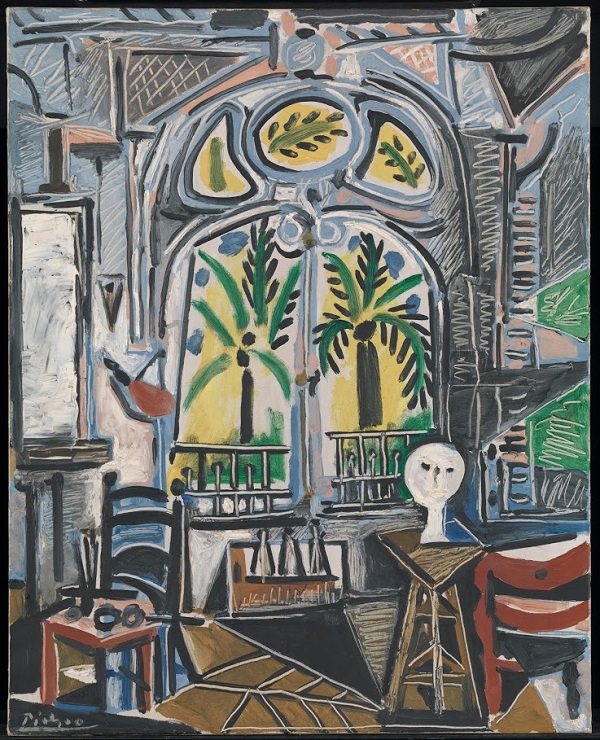 Throughout the show, the co-curators seek to make connections. Along with the acrobats, for example, there are paired paintings of the artists’ studios, each completed in 1955 and crammed with works in progress. Picasso’s version features an airy space looking out onto the palm trees of the south of France, with a blank canvas mounted on an easel and a slightly creepy sculpture of a white head sitting on a wooden table.

Calder’s “My Shop” is a more cluttered place, with several paintings crowding one wall, along with paint cans, an African mask with its tongue sticking out, and a few small windows in the background. 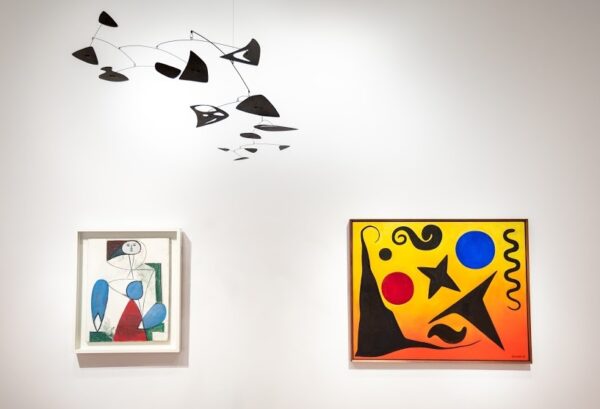 Sometimes the connections seem a bit thin. A pairing of Picasso’s “Woman in an Armchair” and Calder’s “Seven Black, Red and Blue,” both from 1947, mainly share their date of creation and a few flat geometric shapes painted red or blue. The Picasso is a cheerful if lightweight portrait of a young woman. The Calder is an exercise in showing that the master of the mobile could also create energetic abstract paintings. Overseeing them both is Calder’s elegant Black Lace mobile of about 1947, slowly moving, evolving, changing shape like a ghost.

“Calder-Picasso” runs through May 23 at the de Young Museum, Golden Gate Park, San Francisco. The show will be on view at the High Museum of Art in Atlanta from June 26 to September 19 and then will travel to the Museum of Fine Arts, Houston, in the fall. An extensive catalog is published by Skira.