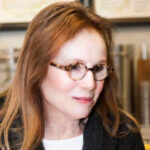 Susan Isla Tepper: In the long art-filled corridor on the second floor at The Metropolitan Museum in NYC, there is a painting, amongst many, many others, and many sculptures, a painting that has been hanging quietly for decades. As if on its own. Almost deliberately apart, in spirit, from other works that draw the crowds. As though it wishes to be ignored. I thought of that painting instantly when reading your poem THE RIVER STYX, the first poem in your new collection titled THE DEEPEST PART OF DARK. When you wrote the poem, did you see an image of any sort?

Anne Elezabeth Pluto: I too, have seen the mysterious Böcklin painting at the MET. I didn’t have an image – but I had a dream. We had a pact, whoever died first was meant to come back and tell the other what it was like in the next world. Of course, my mother hoped that she would be first. When I dream about my mother, I don’t see her face – she has her back to me, as the figures in this painting – both Charon and his passenger, except for one dream. In this dream I did see her face (and my father’s).

I had returned to my childhood Flatbush apartment. My parents were in my bedroom – but there were closed French doors in the L-shaped hallway; they instructed me not to go through them. We sat in the bedroom on the bed and visited. They were very happy. That was the message. Waking up, I realized the forbidden French doors were a portal to the “next world.” Writing the poem, I imagined the boat ride on the River Styx in the same vein – my mother stepped into the boat and passed through a portal. The “door” closed. She wasn’t alone and the guide – Charon – would take her there safely. They wish to be ignored. The living ask too many questions.

ST: How fascinating that you were able to translate this early childhood experience, perhaps too emotionally dangerous for such a young child, and so it was tucked away ‘til much later, when you grew up, and it became this poem:

You promised to come back
swore to me that you would
let me know what it is like
the empty landscape – the house
of the father – the river styx
or perhaps paradise. You were
not sure yourself – even in prayer
it was not Christ you longed to see
neither father nor mother – grandparents,
or dead sisters – it was him only
him – my father. I wait for you
each night – I pray you may appear
and tell me the story of how it was
to cross over.

ST: These past few years have brought forth an extraordinary amount of what I see as \”unnecessary death.\” It brings up the question: Is death ever necessary? Perhaps for some. I have seen people make a final departure plan in their minds quite some time before the actual occurrence. They just bowed out. I found it unnerving. Because so many wish to live on in the best way possible despite facing terrible odds.

AEP: Such a good question. Unnecessary death – death that could have been prevented? The COVID death numbers we watched climb on TV or from reading newspapers or looking at social media? What other death could we put in that category? Any disease? War – for certain. The murders of children? The daily shootings that deface our lives? I don’t want to be desensitized to violence/death. I want to feel. Poetry comes from the need to give language to feeling and experience. Compassion comes from grief, from pain. At least for me.

Is death ever necessary – back to your question. I’ve had a challenging and difficult year. My husband was in home hospice care for five months. At the end peace was necessary – and peace could only come with his death. He deserved peace. Perhaps death is only necessary when there is no other remedy. But typing these words I’m reminded of the miraculous – and I have seen that too. My father survived his prostate cancer for 17 years – his doctors called it a miracle. Where did that miracle come from: the macrobiotic diet my mother supervised – or his faith? He believed in life.

ST: Why some live while others die with kind of the same odds, is, to me, one of the divine mysteries. Unfathomable. And probably has some connection to mercy. Mercy has always, down through history, been in short supply. Without death on the fringes there may be a total absence of mercy. But, getting back to your comments about the necessity of death.

AEP: One of my favorite novels is The Master and Margarita by Mikhail Bulgakov. The Devil – Professor Woland – professor of Black Magic – appears in Moscow with his demonic comrades and turn the city (and especially its pretentious poets and writers) on its head – the other plot is a novel written by the Master – where Pontius Pilate is waiting in eternity for Jesus of Nazareth to forgive him. At the end of the novel, where Woland returns to his true form – Satan – he and Jesus (no longer the fool in the Master’s novel) must decide if the Master and his lover Margarita should have eternal life or peace when they die. They decide on peace. You have to read the book to find out what that “peace” is.

ST: Is there a poem written to or about your husband in this collection?

AEP: Yes, he was alive when The Deepest Part of Dark came out in July 2020. Let me share one of them here.

I’d gladly follow them
Three men from the east
having watched the moon and stars
forever searching from their Persian tower
where now their tombs stand turquoise
studded blue reaching heaven – did it burn them
into splendor when they packed their gifts
and saddled camels for the journey west
and could He really have still been newborn
or was He already his mother’s splendid son
whose uncommon life and violent death had yet to
open – a book we all have read and read again.
This Christmas the story passes through me as if you
had entered – welcome home this star it burns for me
as you – brilliant golden – the light you bring me from the west
your skin as it ignites my own and turned together
into the rope of our surrender – I’d gladly follow you
this Christmas to any manger – where they came too
and brought their gifts – for a healer, a holy man, a king.

ST: FOG is a departure, in some ways, from many of the other poems in this collection. It opens onto a homey scene: Dove gray farm weather. It speaks of a sweater, horses, barn, luminous cups in fog rolling near a kitchen window. What is the emotional core, what were you going for here?

AEP: I was going backwards – to a version/vision of childhood that hovers on the banks of the River Styx. Although summer, the days are growing shorter, the horses are nervous, the earth is being turned over, the fog coming in – this is the space between this world and the next. The speaker has her heart both in the land of the living and the realm of the dead – she is comfortable with both the living and the dead.

Purchase THE DEEPEST PART OF DARK by Anne Elezabeth Pluto

View Author Archive
Susan Tepper has been a writer for twenty years and is the author of nine published books. She writes in all genres, with stories, poems, interviews, essays and opinion columns published extensively worldwide. An award-winning author, Tepper has been nominated eighteen times for the Pushcart Prize, has received a Pulitzer Prize nomination for the novel What May Have Been (currently being adapted for the stage), Second Place Winner in Story/South Million Writers Award, 7th Place Winner in the Francis Ford Coppola sponsored Zoetrope Contest for the Novel (2003), Best Story of 17 Years of Vestal Review, a nomination for NPR’s Selected Shorts Series, and other honors. Additionally, Tepper has been an editor at Wilderness House Literary Review and Istanbul Literary Review. For seven years she was panel moderator of the SMALL PRESS PANEL at Marymount Manhattan College Writers Conference which eventually morphed into the Hunter College Writers Conference. FIZZ, her reading series at KGB Bar, NYC, ran for a decade, and showcased the talents of our literary stars as well as many first time authors. Before settling down to the writing life, she worked as an actor, singer, flight attendant, marketing manager, overseas tour guide, TV producer, interior decorator, rescue worker and more. She blames it all on a high interest range. Tepper is a native New Yorker.