Though it takes place five years ago on the brink of the incoming Trump administration, few plays are as of the present moment as Erika Dickerson-Despenza’s Cullud Wattah, now at the Public Theater. The poetic and political play depicts the devastating impact of the Flint, Michigan water crisis on a three-generation family of African-American women. The crisis continues right up until the final curtain when the actresses directly address the audience to inform us that as of the date of the performance attended, Flint has not had potable water for 2,769 days. The lights come up, the cast exits without a curtain call and we are left with the staggering truth.

When Cullud Wattah steps outside the theatrical box and deals with the catastrophic circumstances of government corruption and neglect in a highly presentational manner—as it does at the climax—the play is disturbing and earth-shaking. When Dickerson-Despenza employs familiar family conflict as the play’s engine, the effect is still powerful but not quite as strong.

The initial images are subtly striking as are most of Candis C. Jones’ stage pictures. The audience enters the Public’s Martinson Theater to be greeted by Adam Rigg’s detailed and arresting set. We see a house with the walls gone, the plumbing exposed, and surrounded and cluttered with plastic water bottles filled with toxic-looking brown liquid. The walls of the entire theater are a slate blackboard and covered with chalk lines denoting numbers in groups of five. In the corner by the entrance, a person who seems to be a young girl is marking off more numbers and drawing smiley faces. The young woman then mounts the stage and bathes herself in an open tub. The rest of the cast enters and sings a parody version of the traditional spiritual “Wade in the Water,” intoning “Lead in the Water/ Snider (the governor of Michigan who engineered the crisis) playing God with the water.” Once the play starts, we discover the chalk strokes are counting the number of days without pure water and the grimy material in bottle is what is coming out of the community’s facets. 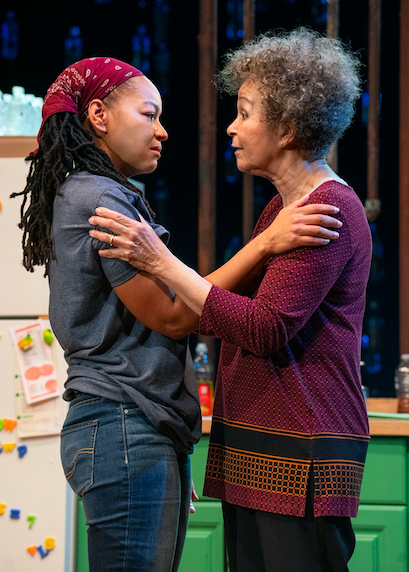 The youngster drawing on the chalkboard is nine-year-old Plum (brilliantly played by adult actress Alicia Pilgrim) who is suffering from leukemia. Her teenage sister Reesee (Lauren F. Walker, displaying bravado to hide the character’s insecurity) has taken to worshipping a Yoruba water goddess to find salvation and certainty. Their mother Marion (powerfully resilient Crystal Dickinson), recently widowed when her husband was killed in Afghanistan, struggles to hold the family together with her union job at General Motors, one of the corporate perpetrators of the crisis. Marion’s sister Ainee (fiery Andrea Patterson) is recovering from drug addiction and expecting a child after a series of miscarriages brought on by the contaminated pipes and liquid. Big Ma, the matriarch (Lizan Mitchell in a sturdy performance), calls on God to preserve her children and grandchildren and provides her own brand of spiritual solace. 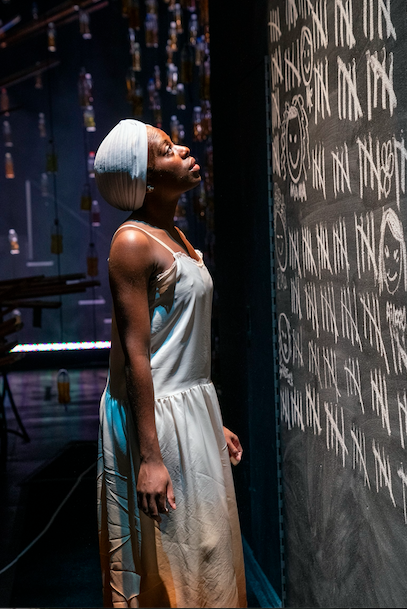 There are somewhat melodramatic moments as when Marion and Ainee have a knock-down, drag-out confrontation on whether or not to join a class-action lawsuit against Snider and GM, Marion’s employer. But, as noted, when Dickerson-Despenza and Jones step outside convention or take the unexpected route, Wattah really boils.

The quiet, intimate moments are more explosive than the shouting matches. When Plum calmly inquires of Marion, “Mama, am I gonna die?” or when she giggles in delight in making a game of counting the numbers of gallons of “clean” water needed to prepare the Thanksgiving dinner, it’s shattering.

The opening of the second act is theatrical, but even more emotive. After having gone into labor at the end of the first act, Ainee enters and smears black paint on a giant blow-up of the official lawsuit. Then, other members of the family enter in white robes carrying an open umbrella decorated with baby toys. As Ainee continues to black out sections of the giant legal document, the others drop the toys into a tub of water as if in a ceremony of grief. It’s eerie, frightening and delivers the message of tragedy and futility with imagination.

Similarly, the final moments of the play—before the cast delivers the number of days Flint has suffered with bad water—are like a hideously inevitable Greek tragedy. No spoilers here, but all the women are metaphorically drowning in the Cullud Wattah. A powerful wrap-up to a powerful play.