Bruce Norris has already won a Pulitzer Prize and a Tony Award for Clybourne Park, his clever contemporary twist on race derived from Lorraine Hansberry’s A Raisin in the Sun. He is in line for more accolades for his latest searing and insightful play, Downstate, now at Playwrights Horizons after runs at London’s National Theater and Chicago’s Steppenwolf Theater Company. The subject matter is off-putting and challenging to say the least. But this skilled dramatist finds displays incredible compassion for his deeply troubled characters. 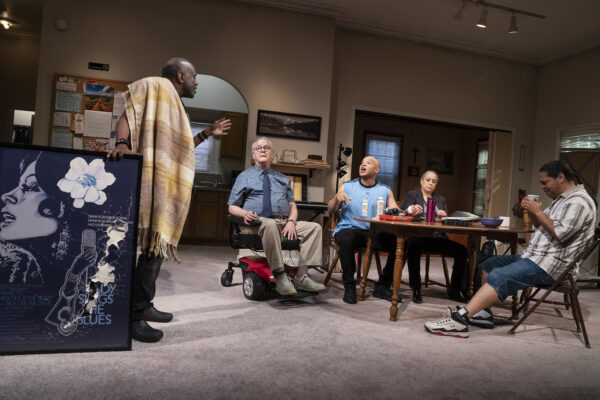 The setting (Todd Rosenthal created the realistic, detailed set) is a group home for sex offenders. The four residents have each committed a cringeworthy crime involving minors, but Norris endows each of them with depth and humanity. There’s elderly Fred (subtle Francis Guinan), attempting to salvage his sanity with music and confined to a wheelchair after his back was broken by a fellow inmate when he was in prison. Dee (sharp, vibrant K. Todd Freeman), copes with his demons with humor and DVDs of classic films. Gio (energetic Glenn Davis) plans to escape his stigma with grandiose entrepreneurial schemes as he punches a clock at Staples. Felix (heart-wrenching Eddie Torres) studies the Bible as he plots to reunite with his daughter whom he sexually assaulted.

Character development and exposition is deftly delivered in a long scene with the men and their tough-as-nails parole officer Ivy (steely Susanna Guzman). Norris artfully blends mundane details with earth-shattering restrictions to fully convey the residents’ impossible situation. One minute Fred is asking Ivy if her family was able to take a weekend trip and the next Ivy is informing her charges they can no longer shop at the nearest supermarket because it’s been judged too near a school and it would potentially place them in contact with children. Never mind that an eight-land highway separates the school and the store. That’s the new law, Ivy dispassionately states, deal with it. 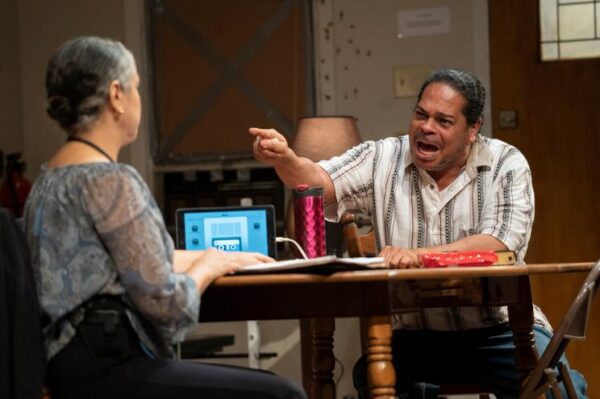 The plot is set in motion when Fred receives a visit from his long-ago victim, Andy, now a grown-up nervous wreck, seeking closure and atonement from Fred. Understudy Matthew J. Harris subbing for Brian Hutchinson, gives a shattering depiction of Andy’s simmering stew of rage and shame. Sally Murphy is equally intense as Andy’s jittery wife Em. Andy’s arrival is the match that lights a powder keg of emotion and violence.

In this potentially dismal milieu, Norris finds humor and humanity, giving full weight to each character—including Gio’s hyper-active co-worker Effie (a very funny Gabi Samels). The playwright explores themes of guilt and responsibility, never making anyone onstage into a total victim or villain, but exposing their complex motivations and the inadequacy of the justice system to deal with them.

Pam MacKinnon’s invisible direction perfectly balances the lighter and darker moments so that Downstate is a frighteningly real play which will stick with you long after the final shattering moments.