$200: How DT•LAB Got Forced Out of The Last Bookstore

Wow. Crazy weekend. Two beautiful events sponsored by DT•LAB, one on the main floor that brought over 150 people to a poetry book release and one in our intimate little space when a group of awesome CalArts students visited and we discussed all things zine, chapbook and maker culture.

Actually, I should say what was our intimate little space.

Yup. DT•LAB got forced out of The Last Bookstore over the weekend. All because (as far as any of us here at Writ Large Press can figure out) we dared ask to be treated with a little decency and asked for $200 that belonged to us.

For a quick refresh: our goal opening DT•LAB was to showcase local writers, publishers, artists, musicians, and other urban alchemists, give them all a place to experiment, perform, sell work, and push forward the creative community that is bustling in this city.

The troubles began not long after DT•LAB opened. (Not long is relative I guess since we lasted only 2 months in there!) The owner, Josh Spencer, fired our partner Peter Woods, who was also working as a manager of The Last Bookstore, under a contested reason that just about all the employees at the store will tell you was bullshit. Peter was livid, but swallowed the anger for the time being so we wouldn’t mess it up for the writers and artists we’d booked for events.

And if you knew what Peter had done for The Last Bookstore since the start, you’d be surprised that he was actually able to keep this calm about it.

Peter had been there since TLB was a storefront on 4th & Main. He started bringing in events that were filling up the space, and not just popular events, but good, thought provoking events, like the night he brought in Roger Gunevere Smith to perform. And when the store was embraced enough by the community to succeed and grow out of that small space, Peter literally helped build what is now considered one of the most beautiful bookstores in the world.

He, along with the other employees and other members of this DTLA community, built the current store by hand—each bookcase, the book tunnel up in the Labyrinth, all the other installations.
They did it all through 70+ hour work weeks.

No overtime for anyone.

Everyone working on it loved the bookstore that much, wanted to help create an amazing place for people in the community to enjoy, take pride in, a place to explore and in which to find magic.

And once it was built and open, Peter continued bringing in great people and great events: Poor Dog Group, the LA Opera, Quetzal, and more. He brought in Kofie to create the mural in the foyer surrounding the entrance to the store. But it didn’t matter that the events had been successful and that his peer reviews were top notch. For whatever reason, the owner wanted Peter out. So he fired him.

On the weekend before Halloween, I walked into The Last Bookstore to go check on DT•LAB and update our wall. What I found were signs all over that said the entire store would be closed for filming from Monday through Thursday. This was the first I’d heard of it and it upset me because we had events and workshops scheduled in our space and we hadn’t been informed that we would have no access to it.

When I came home, I emailed Josh asking him why we weren’t informed, telling him that it wasn’t right to treat his tenants this way.

He first blamed me for not keeping track of the notices that had been going out “for weeks” and that it was my fault for not noticing, even though he himself failed to mention anything to me about two weeks prior while negotiating our October rent (after we’d been shorted on the first check he gave us for our sales, which he blamed on his employees). Then it moved to blaming, who else, his employees, who he shouldn’t have trusted to do the job. Finally to his insistence that he didn’t owe us anything because he was doing us a favor, that he was doing Peter, the man he fired for no good reason after paying him just about minimum wage and no overtime, a favor.

He kept harping on this, that he was doing us a favor, even though we paid rent and our events were making him and The Last Bookstore a good deal of cash. How much cash? I’ll tell you at the end of this article.

I wanted two things from him: to waive November rent, since we weren’t allowed to run our business for almost a whole week and had to cancel events; and for him to admit this was wrong. I mean, it was for a David Fincher movie. It was Gone Girl. Starring Ben Affleck and Tyler Perry, among others. So what are we talking, somewhere between 25 and 100 grand they must have paid him to rent the place and shut it down? And I was asking him to waive $200 in rent?

He responded by saying we needed to be out by the end of the year.

Last week, we were incredibly proud to put together a proper book release party for the beloved LA poet, Dennis Cruz, and his second collection, Moth Wing Tea. How beloved, you ask? Over 150 people showed up on a Wednesday night to downtown, battling traffic/parking madness caused by more filming around the block. 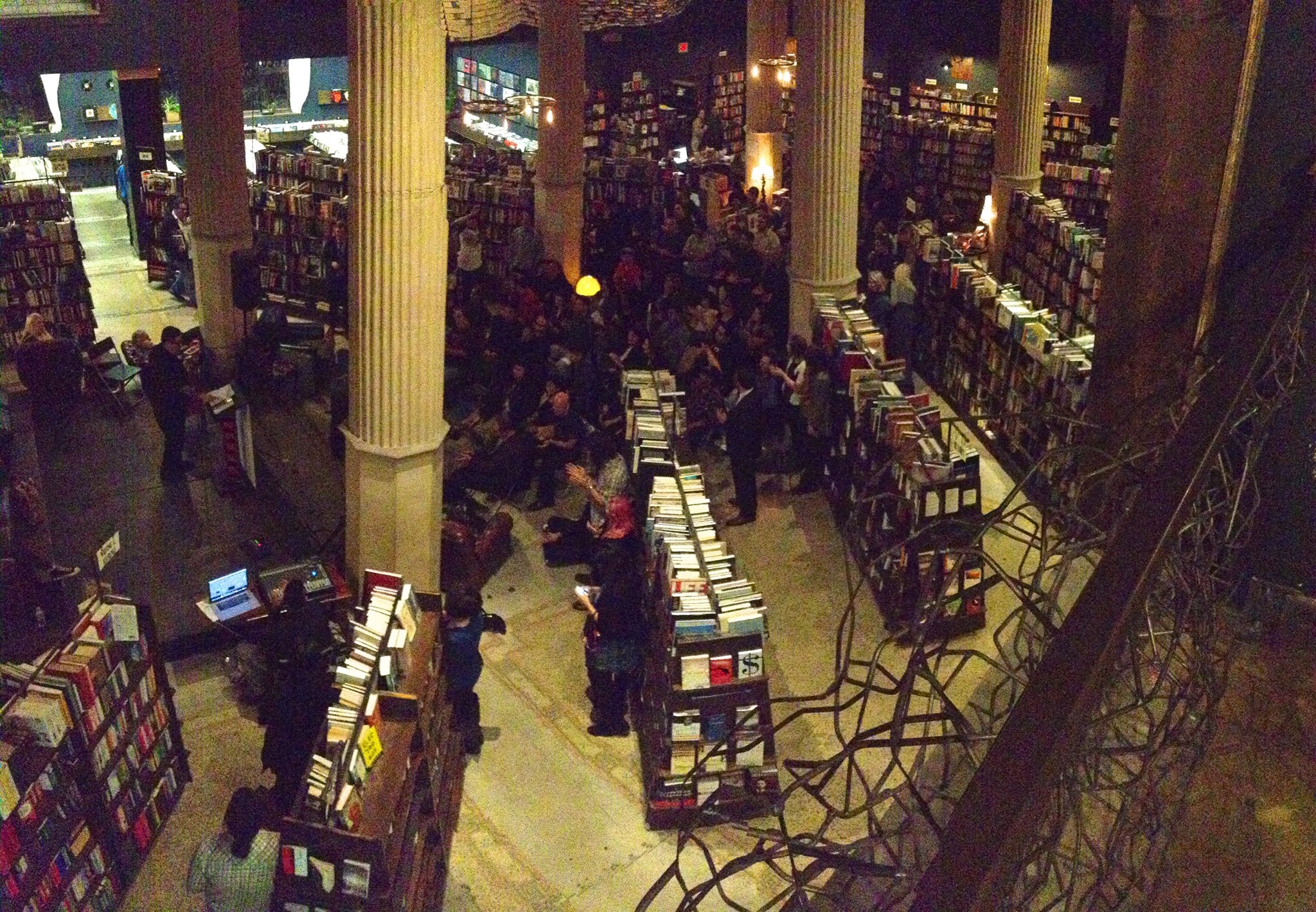 It was a spectacular event, one that really epitomized all that is beautiful about Los Angeles.

His friends and fans bought every copy of his book. And we got Dennis’s cut of the sales as fast as we could. But I found something strange in the check that The Last Bookstore gave us. It was written directly to Dennis Cruz, at 75% of total sales. The deal we had with The Last Bookstore was Writ Large Press would get 100% of our sales for our events (since we are paying rent), then we’d cut a check to our vendors for 70%.

I gave Dennis the check, told him it was 5% more than he expected but to keep it since he deserves it and more. Then I emailed Josh to find out what was going on.

Well, apparently he’d decided that he was going to keep the rest of it, take himself a 25% cut of our sales, contrary to our terms of agreement and contrary to what he’d done before.

And when I kept pushing him on it, he told us to be out immediately.

He sent out notices to his employees, telling them to box up all our things because DT•LAB had to be out. Why? He told them it was because I’d threatened him.

So people, this was my threat: Give us the money that belongs to us, or I will talk to a lawyer.

Judeth and I were talking the other day after the Dennis Cruz event. We told each other that not only were we doing good things, but more importantly, we were doing right things. 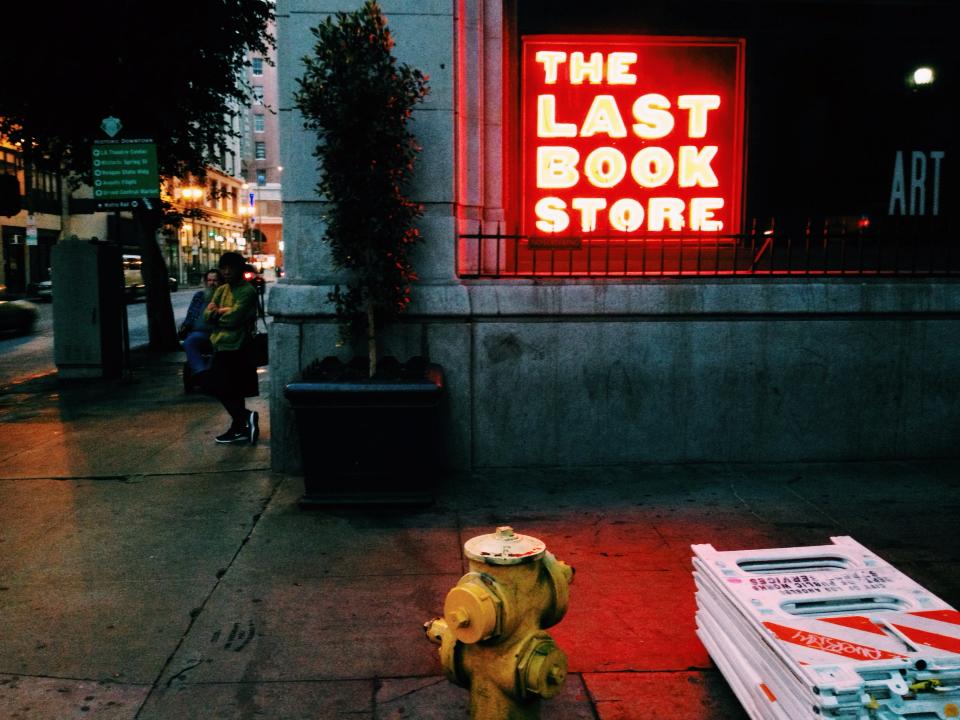 I imagine people will keep flocking to The Last Bookstore. It’s getting more press than ever before. There will be tourists and big fancy events and I’m pretty sure business will remain fine. It is a physically unique and stunningly beautiful space, one that I’m awed by each time I walk in.

But the bookstore, well, the way the bookstore is run, has already alienated the core group that helped build it (both figuratively and literally) into what it is now.

On the day DT•LAB opened, when we celebrated with the incredible daylong celebration we called LAB•FEST, when artists, musicians, and writers all joined forces without pay, even the Grammy Award winning Quetzal, The Last Bookstore sold about $10,000 worth of merchandise. DT•LAB sold about $1,000, of which we paid out 70% to publishers and authors.

Our cut from the event that drew a thousand people was $300, $200 of which then went to rent. And we were perfectly happy with that.

We helped Josh sell close to ten grand worth of things in his store.

Two months later, he kicked us out because he wanted $200 more from our sales of a poetry book and I wouldn’t thank him for trying to take our money.