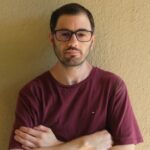 For poet and professor Cynthia Guardado, family, El Salvador and her Salvadorian American identity plays huge roles in her life. It began before she was born in 1984, when her parents fled the country’s brutal civil war as undocumented refugees and made their way to Los Ángeles. That put borders and thousands of miles between them and their cantón—Buena Vista—the land of their ancestors.

Guardado was two when her father wanted his daughters to be connected to family, to Buena Vista and El Salvador, and still undocumented, took his daughters back to meet their great-grandmother, Momma Juana. To make El Salvador real, despite the dangers of the civil war, and not to hold some distant, abstract importance. Ever since, Guardado has repeatedly returned to her homeland.

The importance El Salvador and family play in Guardado’s life, is first seen in her debut collection Endeavor (World Stage Press, 2017) in a handful of heavy, personal, heartfelt poems in a collection about the harsh reality of trauma against women of color in America. In these poems—about an undocumented cousin brutally murdered, how violence in one country still haunts her in the other, the strain physical distance puts on a family, generational trauma—Guardado is already focused on how family and herself, personally, deal with the aftermath of the violence they encounter instead of depicting their traumatic violence as a way to assuage readers’ complicity in ignoring the marginalized group’s contextualized reality. This gives these poems a much-needed alternate point of view that invests readers deeper into who these people are and what El Salvador is, once the cameras are gone.

However, the poems in Guadardo’s second collection, Cenizas (University of Arizona Press, 2022), are more effective in discussing the inherited past of a family and country, than the handful of poems from Endeavor that focus more on the violence El Salvador and her family have endured through a less nuanced lens.

From the outset, Guardado makes clear that her identity is the lens through which she understands the world: “a barrier builds/in the rolling erre harsh against/an English tongue” in “Guardado.\” The why and how she wrote this book in “The Historian,” saying, “I am writing this because no one/else has (& don’t we deserve history too?),” then states, “I write…/this poem instead of writing the poem about Abuelo’s/trauma (because I don’t need to prove to you why we are important).”

Guardado’s writing this book for her family, not for a white audience. And the gravity of writing her family’s history, and the power and healing that doing so provides, creates a human connection to her poems and subjects that’s emotionally tender.

She makes the political personal.

Being in the in-between—a refugee—not belonging to los Estados or El Salvador, “feet walk[ing]     in both words,” hangs heavy through Cenizas. It shapes Guardado’s identity, how and if she can grieve (upon a loved ones death), the connection to her Salvadorean culture/traditions, the ties that bind (of family, a people), borders/walls, war/politics, that prevents her from being whole. It’s the aftermath of this in-betweenness that Guardado focuses on, such as in the poem “There Isn’t Enough Grief.” Her family can only afford for her mother to return to El Salvador for Mamá Chila’s funeral, which becomes “another burden     you carry” because “you’ll know then,” after Guardado’s mother tells her how she prepared Abuela for the funeral, that “you’ll never know          a goodby    that    intimate.”

It’s through this masterful use of heartbreaking tenderness that Guardado illustrates why and how the lingering cost of severed relationships shapes refugees. As the poem ends in Spanish, she says it’s “porque en los Estados Unidos las distancias en multiplican como las muros de las fronteras.”

Cenizas explores so many facets of the inherited past refugees deal with but, just like Endeavor, it’s never dense. Each poem is another part of this inheritance, written as experiences, not as abstract ideas or visually nontraditional poetic forms which creates distance between the book’s subject and it’s real-world implications that pushes the reader away. Instead, they draw the reader into their humanness, as in “Los Estados Is How I Forget,” about the struggle for Guardado to hold on to who she is, to remember where she comes from—family and ancestors, the sights and smells of her cantón—since the more time she spends away from Buena Vista, the more it becomes “a fiction in a photograph of Abuela frozen in the/in-between.” Yet, she realizes she’ll never completely forget because on “a Greyhound from Fresno to Los Angeles” a “woman sits next to me & somehow I know/this is Abuela” because later “I don’t feel so alone anymore.”

And in “Call Me Refugee V,” a persona poem, Guardado steps into the voice of her mother. She depicts a part of her genetic memory by using her mother’s voice to illustrate the intimate connection of how her mother experiences the violence against her body: from the pain polio caused in her right leg, to the militares that raped “my primas…mis vecinas,” to the doctors groping eyes as her mother blossoms into a woman. This eventually causes her to flee to the states, which Guardado carries with her, affecting how Guardado experiences trauma.

One would expect such a poem as “Call Me Refugee V” to come near the beginning of the book, not two-thirds through, since it sets the context for why everything that Guardado’s family experiences, occurs. But the violence against women that causes her mother to immigrate isn’t even the poem’s focus. It opens with how her mother experiences the aftermath—pain—of the polio that cripples her right leg and pushes the trope of society’s sexual violence against women, to the back half. Guardado is saying, along with its placement in the book, that it’s the women in her family that matter. Powerfully, she’s saying again: see them. See their own histories. Though their eyes.

Cenizas is not perfect. Though its narrative holds up well without the “Refugee” poems in its first half, they are absolutely necessary to the book’s second half, preventing the narrative from weakening into only topically related poems with no connective tissue to the book’s narrative through lines. “Call Me Refugee VI” is the best example of this, returning to and expanding on, the overt political set-up of Cenizas’ point of view, that pushes back on how the “histories” of brown families whose fates are shaped by geopolitics are told which, up to this point, underpins the rest of the narrative.

Guardado is finally speaking this truth out loud—this elephant in the room—as she begins to truly understand who she is, holistically.

In immensely personal poems, Cynthia Guardado’s Salvadorian American identity bleeds throughout Cenizas. It’s a warm, tender, heartbreaking, but ultimately empowering gift to her family, their legacy and her own understanding of who she is, her place in the world and the ties that bind.

Boyle Heights born, Guardado proudly claims the El Salvador of her ancestors. “I have no alternate origin story.”

View Author Archive
Brian Dunlap is a native Angeleño living in Los Ángeles. He explores and captures the city’s stories hidden in plain sight. He is the author of the chapbook Concrete Paradise (Finishing Line Press, 2018) and the winner of a Jeff Marks Memorial Poetry Prize from december magazine judged by former Los Ángeles Poet Laureate Luis J. Rodriguez. His poems, book reviews and nonfiction have been published in PacificREVIEW, California Quarterly, Lit Pub, L.A. Parent, and the anthology Reimagine America (Vagabond, 2022), among others. He runs the blog site www.losangelesliterature.wordpress.com, a resource to explore L.A.’s vast literary culture.