My first experience playing baseball was when I was seven, and I wasn’t very interested in the game at first. Suddenly, when I joined my second baseball team, everything clicked. I found I had some throwing skills, I made new friends, and I became obsessed with learning the rules. For example, one crazy rule is that a batter can run to first on a third strike if the catcher doesn’t catch the ball and if he beats the ball to the base, he is safe! Baseball rules fascinated me, and I learned them all while growing up, playing the game, and watching professional games. I played Little League all through my childhood and then transitioned to travel baseball as a teenager, which is more competitive. When I was in High School, my team was very competitive and there were around 50 people who tried out for the 25 positions in a week-long try out. I made my High School team and I saw myself becoming a professional baseball player someday. 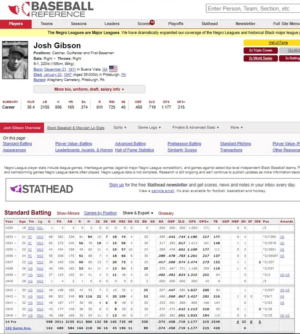 Then reality struck and I realized only a tiny percentage of those who play high school baseball have a professional career. About this time, I transitioned to umpiring and started my own baseball reference database. There’s a lot of hidden info that casual and every day fans aren’t exposed to while collecting statistics and it can be very important to the strategy of the game. For example, most people have heard of a Batting Average (AVG) as a statistic and would think a high AVG is good since it represents the rate a batter gets on base from a hit. However, On Base Plus Slugging (called OPS) tells you more about the player’s value because it is a combination of how many times a batter gets on base plus the productivity of the hit. A triple (hit where the batter gets to third base) is worth three times as much in your slugging percentage than a single (hit where batter only reaches first base). OPS is more specific by tracking the kind of hit made by the batter and provides a value for the quality of the hit. There are even more sophisticated statistics that take much more into account. I collect this data in my own time at least two hours a day in a OneNote file and pay attention to important details of current and recently retired players (within the last 20 years). I do this so that I can learn as much about every player and predict the kind of decisions that Managers and Front Office staff of professional teams are forced to make almost every day using these statistics. If a player doesn’t fit into their future goals, they will be on the cusp of being let go or moved to another team. Fans don’t always like the decisions and these decisions don’t have a perfect solution, but the research each team does is an attempt to be as accurate as possible so they can make decisions on player acquisitions and cuts within the limits of their managing payroll. Despite the best plans, there are still lots of unexpected occurrences throughout a season like player injuries, trades, legal, and personal issues that can affect the game. Through following the statistics of baseball, I found my passion not just for playing the game like I once did, but in tracking the data.

I transferred all my energy into learning the intricacies of baseball statistics and creating my own database to keep up with Major League Baseball (MLB) news, not really expecting to ever turn it into anything but a hobby. I found out I was not alone. There is a whole movement in professional baseball centered on changing the game, not only how you watch the game but how it’s played through statistics. This was highlighted in the book Moneyball: The Art of Winning an Unfair Game by Michael Lewis and made popular by the movie of the same name. The book focused on the Oakland Athletics and their quest to transform their small budget team into a major competitor through creatively acquiring discount players with favorable statistics (Lewis, pp. 119-137). Since the time that book was written in 2004, almost every baseball team, large or small, has adopted baseball statistics as a strategy for their team development. A recent example of this, one of the MLB’s smallest salary teams, the Tampa Bay Rays, just made the 2021 postseason with a team salary of only $70.8M (Spotrac.com) compared to the $184.5M (Spotrac.com) payroll of the Boston Red Sox, who they are facing in the playoffs. Through a well-known strategy of choosing players based on their underlying statistics, the Rays have made the postseason for the last three straight years. Baseball statistics provides a way to level the playing field for all the baseball teams.

One day about six months ago, I was searching on the MLB career opportunities website and saw an advertisement for a job in Baseball Operations. It went on to say they get many applicants and not all would get called back for an interview. I was nervous about applying and was filled with self-doubt. After all, this was Major League Baseball! I decided to take a chance and submitted my resume. Two weeks later, I got a call from the hiring manager to take an online test on my knowledge of baseball. I had to take a timed, 30 question test on all aspects of the game from scoring, pitching, fielding, and covered both offensive and defensive situations. It was hard since I only had anywhere from 30 seconds to 1 minute to answer each question. As sure as I was of my baseball knowledge, I still didn’t dare dream my dream job was within reach. To my surprise, the hiring manager offered me the job! I now get paid to watch baseball games as an MLB Data Operator and have loved every minute of it. Since it’s only part time, I’m still aspiring for that full time career position with MLB but I’m now one step closer, thanks to that hobby that turned into an obsession, that turned into my dream job.

(Read all the pieces in This I Believe)

Garrett Kuhn was born on October 6, 1998, in Colorado Springs, CO but moved shortly afterwards to Cheyenne, WY where both his parents worked as Air Force officers at Francis E. Warren AFB. While living in Cheyenne, Garrett became a Colorado Rockies fan and was lucky enough to be at Coors Field for his ninth birthday party to see his favorite team clinch the NL Wild Card tie-breaker game, (which they also won) leading to their first and only World Series appearance in 2007. When he moved next to Northern Virginia, he became a devoted Washington Nationals fan. As luck would have it, he was able to watch his beloved Nationals win their very first World Series pennant on October 30, 2019. In 2021, Garrett became an employee of Major League Baseball as a Jr. Data Operator for the Southern Maryland Blue Crabs.

3
Tags:
Previous Article
Seasonal Seasonings
Next Article
Lessons to be Learned #7 – The Challenges and Wonder of Childhood