Giving Pastels the Respect They Deserve

Pastel drawings have always been considered a secondary art form, not as versatile or durable as oil paintings or frescoes, not as “important,” something more suitable perhaps for the amusement of women of leisure.

Now an elegant new exhibition at the Legion of Honor Museum in San Francisco seeks to change those perceptions. Color Into Line: Pastels From the Renaissance to the Present surveys five centuries of the medium, ranging from a delicate drawing of a woman’s head by a follower of Leonardo da Vinci to a life-size portrait of an 18th-century French aristocrat in all his finery to moody Impressionist landscapes to Wayne Thiebaud’s luscious Pop Art rendering of Two and One-Half Cakes (top image).

While oil painting in Europe can be traced back to the Middle Ages, pastels were developed in Italy in the 1490s. They combine ground-up pigments and a filler such as chalk, held together with a binder such as gum arabic and formed into a stick or crayon. And while pastel drawings, like all works on paper, are fragile, they do have the advantage of being able to combine color and line easily in one stroke, unlike oil painting. They also have a smooth, velvety texture that’s hard to match. 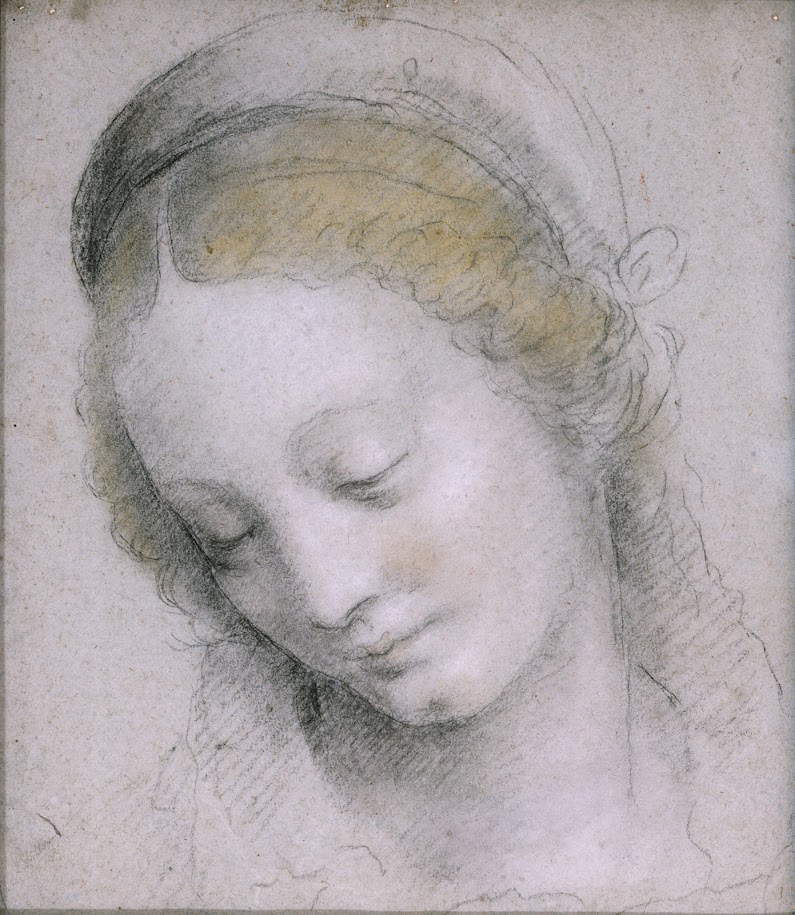 Bernandino Lanino, Head of a Woman, Looking Down, about 1540, black chalk and pastel on blue paper. Santa Barbara Museum of Art, gift of the Joseph B. and Ann S. Koepfli Trust.

The earliest work in the show, Bernandino Lanino’s Head of a Woman, Looking Down of about 1540, doesn’t really demonstrate all of these qualities. It’s mostly a line drawing in black chalk, with only a bit of color in the subject’s blond hair and on her cheeks, and only a bit of the smooth shading that pastels do so well. Still, it’s a sweet portrait of the young woman, with her tilted head and downcast eyes creating an air of mystery and recalling similar works by Leonardo. 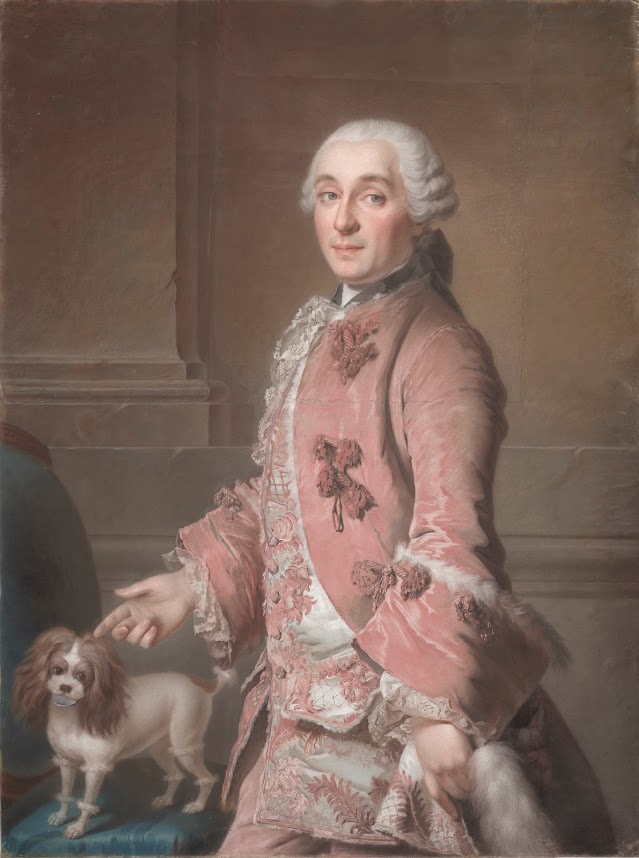 Attributed to Jean-Etienne Liotard, Portrait of a Man and His Dog, about 1746-50, pastel over graphite, on five sheets of parchment mounted on canvas. Fine Arts Museums of San Francisco, gift of Grace Hamilton Kelham and Leila Hamilton Lewis in memory of their mother Grace Spreckels Hamilton.

Along with a few loans from California collections, the exhibition mostly comes from the Legion of Honor’s own holdings at the Achenbach Foundation for Graphic Arts. These include an impressive three-quarter-length portrait of a French aristocrat posing in a fancy pink waistcoat with his tiny white dog. The drawing, almost 4 feet tall and 3 feet wide and executed on five separate sheets of parchment glued together, has almost the scale and detail of an oil painting by Gainsborough or Reynolds. The work, recently attributed to Jean-Etienne Liotard from about 1746-50, may represent a magistrate in Lyon, Philippe Basset de La Marelle. Amazingly, the drawing hasn’t been exhibited since it was acquired by the museum in 1965.

Other portraits from the early 19th century have the same power and polish as the Liotard, plus a lot more sex appeal. Elisabeth Louise Vigee-LeBrun’s Portrait of Mrs. Spencer Perceval of 1804, for example, features a pretty young brunette with enormous brown eyes, a low-cut, lace-trimmed dress, and a come-hither expression. She would pair nicely with Marie Gabrielle Capet’s Portrait of Marie-Joseph Chenier of about 1798. Chenier, a French writer and politician of the post-Revolution era, wears a simple brown coat, a white scarf wrapped around his neck, and a stylishly unruly haircut to match his rock-star good looks. (It’s also worth noting that these wonderful portraits were drawn by women artists, using a medium closely associated with women of the period.)

By the mid-19th century, pastels began to move outdoors along with oil paintings. Impressionist artists left their studios to capture city streets, country fields, and ordinary working people. (Fun fact: For pastels, this was possible in part because of a technical innovation, the development of a stable green pigment, which hadn’t existed in the first three centuries of the medium. Without a reliable green, pastel artists from 1500 to the early 1800s couldn’t really draw the natural landscape.) 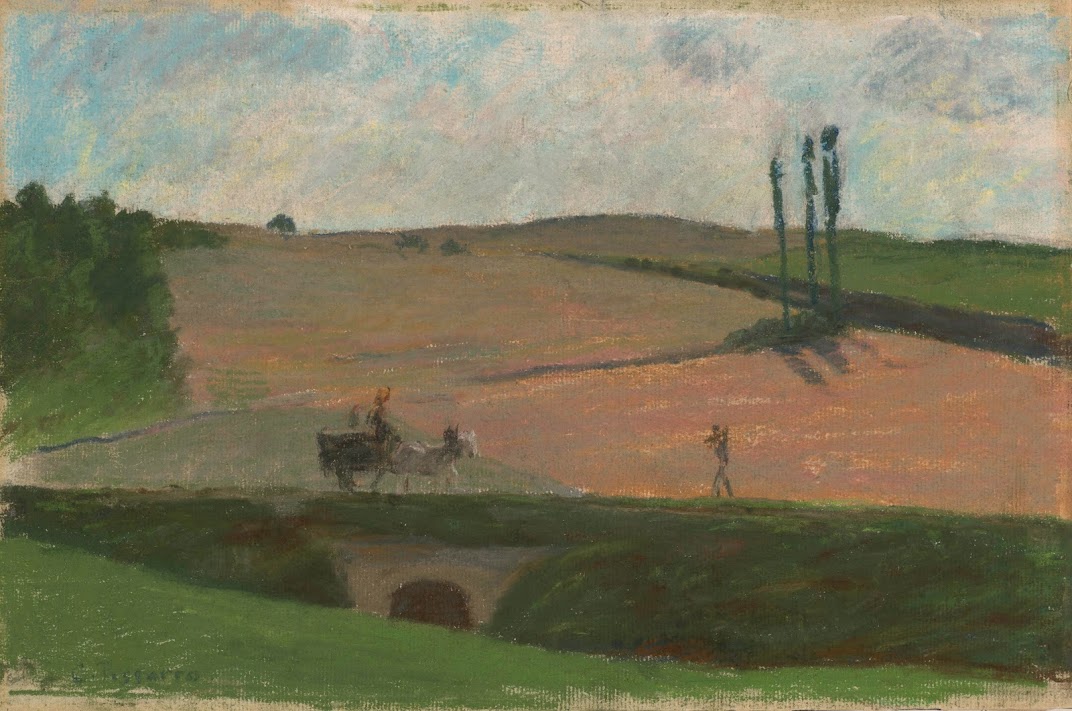 Camille Pissarro, The Road to Ennery, 1874, oil pastel on paper. Collection of Deborah and Joseph Goldyne. Photograph courtesy of the Fine Arts Museums of San Francisco.

Camille Pissarro’s The Road to Ennery of 1874 is a typical Impressionist landscape, a horizontal view of blue sky, green hills, brown fields, and a horse-drawn cart crossing a small stone bridge. The page-size image gets its energy, and its visual depth, from a series of diagonal lines where the fields meet the hills or the country road. 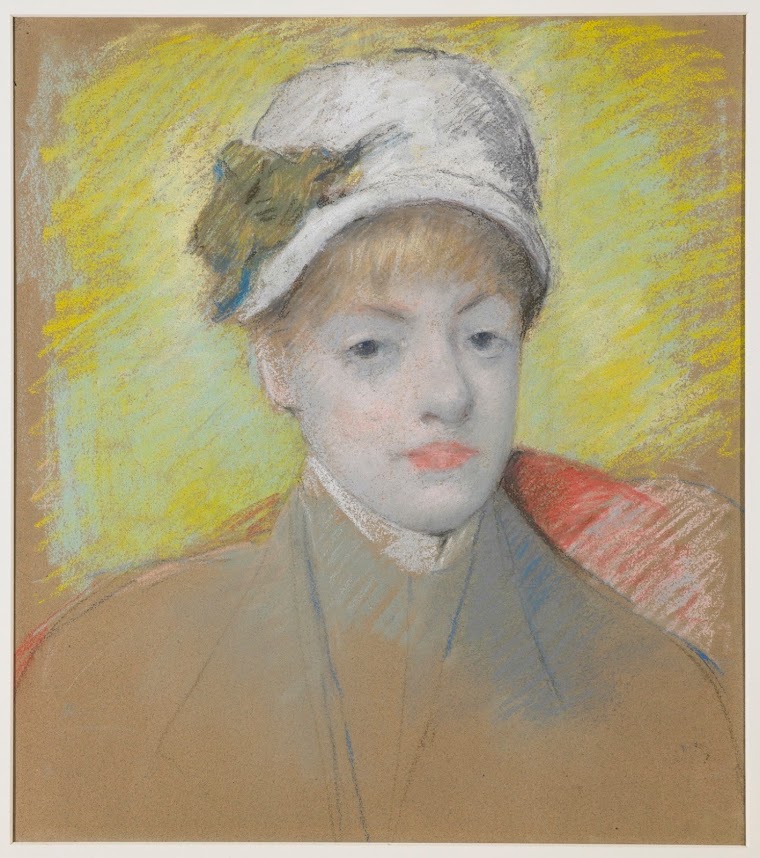 The American Impressionist Mary Cassatt is represented by two glowing portraits, including Bust of a Young Woman of 1885-90, which seems more like a preliminary study than a finished work. While the woman’s head and hat are fully realized, her blouse and coat are only hinted at. Yet the drawing has a freshness and vitality that captures the mood of this serious young woman.

The 20th century contributes a full range of works, from Expressionism and Cubism to Surrealism and Pop. There’s a dreamlike scene by Salvador Dali, a muscular landscape by Marsden Hartley, a somber portrait by Georges Rouault, a mural study by Diego Rivera, and colorful abstractions by Richard Diebenkorn and Joan Mitchell. 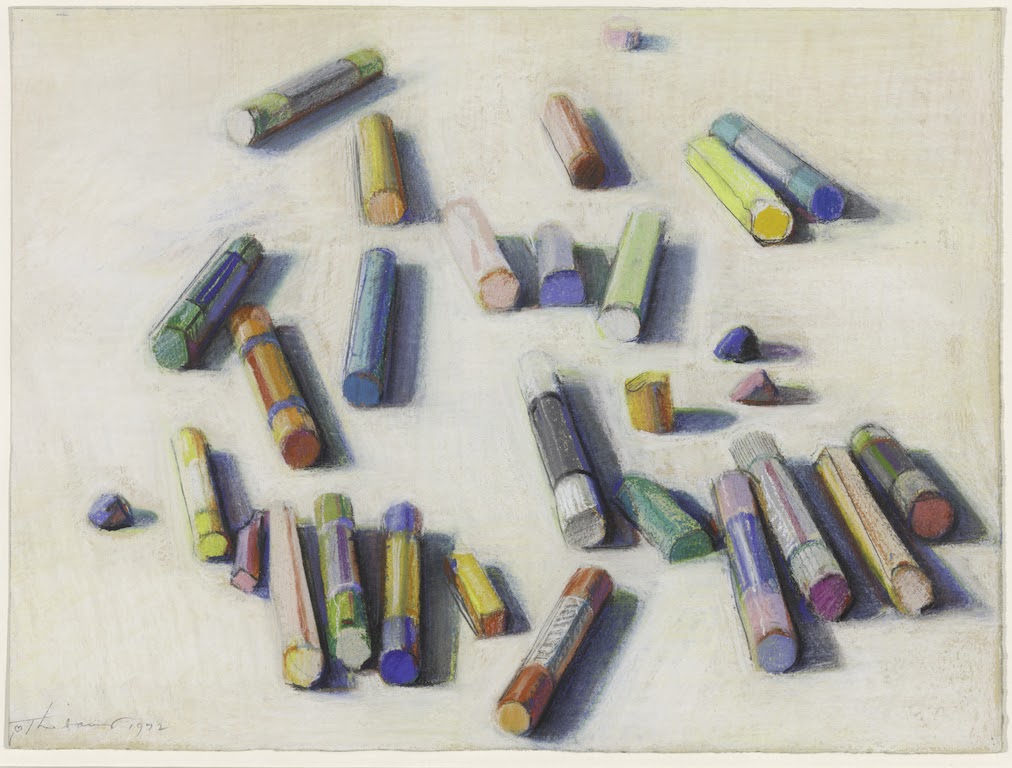 The Bay Area Pop artist Wayne Thiebaud gets special treatment, with five of his luscious pastels, including cakes, a pie, a gumball machine, a watermelon and knife, and a tribute to the medium itself — a landscape of pastel crayons scattered across a tabletop. It’s a fine way to celebrate an underappreciated medium.

Color Into Line: Pastels From the Renaissance to the Present runs through February 13, 2022, at the Legion of Honor Museum, Lincoln Park, San Francisco. An extensive catalog is published by the Fine Arts Museums of San Francisco.

Tags:
Previous Article
What are the weirdest payday treats?
Next Article
Networks of Mutuality