Harmless Social Labeling Isn’t So Harmless After All: Ethical Issues Behind the ‘Us-Them’ Group Dichotomy

Background on the Social Construct of ‘Us-Them’

Author’s Note: In reading this paper, for ease of comprehension, think of ‘us’ and ‘them’ as proper names applied to two equal but separate groups of people: Group-Us and Group-Them. Doing so will eliminate a lot of otherwise awkward wording juxtapositions occurring throughout.

‘Us-them’ with respect to social groups happens to be a social-psychology phenomenon. Yet one as natural and customary as coffee alongside the morning newspaper. And just as seemingly innocuous is its custom of social labeling: a wielding of differentiating social labels with enough self-sustained momentum—a potency the equivalent of Robusta-blend caffeine—to achieve one-sided advantage for anyone belonging to any in-group referring to itself as ‘Us.’

In making sense of our world we apply basic subject-object duality in our everyday language to differentiate ourselves—the subject—from anything we perceive—the object. Yet when a group does this, the mere existential practice of splitting subject from object for convenience of differentiation and the like, takes on darker tones: whereby favoritism is awarded to the very subject who invoked such a dichotomous distinction at the start—‘Us.’

Said differently, the artificial splitting of a single group of people into two groups does more than merely afford a speedy and convenient label for the split-offs, ‘Them.’ For the simple act of putting a fraction of its own kind into a separate reference-bin, a group has set them apart just far and wide enough to view them as unlike. As other. Which is where various social labels instrumentally figure in. The ‘them’ group is now situated in a neutral corner whereby the manner in which they’re perceived and treated is fair game for all manner of erratic and fluid interpretations. And from those will predictably spring a likelihood for disadvantageous labels, as will be clarified later. In any event, harmless conduct has just nudged open the door to potentially harmful conduct.

More than Just Serviceable to Spoken Language, Us-Them’s Roots in Humanity’s Darker Side

During the late 1970s the work of a pair of British psychologists, Henri Tajfel and John Turner, led them to theorize that members of a group conform to it out of a deep need to belong, fit in; and from this elemental social act of assimilation into a group they would then derive higher self-esteem, pride, and special sense of group identity (McLeod, 2019). Fittingly, the theory became known as social identity theory. Further to their theory, they argued that group members are naturally given to categorize other related groups based on comparisons made between themselves and those they relate with. The social labeling, or stereotyping, that ensues, wouldn’t (and won’t) go awry unless group bias somehow gets triggered and establishes a foothold.

Based on the psychologist pair’s experimental work they found that Group-‘Us’ (the so-called in-group) has a more or less built-in bias and the fitting name given for it being self-favor. Similarly, from Steven Handel’s article on this subject, I saw the implications for automaticity in any Group-‘Us’ to leap into irrational group favoritism (2020) as though it were a purely natural deed. After reading several interpretations of this conundrum, one view attributes egocentrism within individual members of Group-‘Us’ to have been taken up a collective notch, and now manifesting as in-group sociocentrism: whereby an entire group magnifies its own self-enhancement at the expense of debasing and denigrating an out-group, Group-‘Them.’

A similar view also suggested of Group-‘Us’ says their particular biases slant more towards utter rivalry, winning versus losing; or ‘Us’ against ‘Them.’ Under such contentious instances tendencies towards self-favor are anchored to the cause of winning. Regardless of psychological account, there’s a prevailing underlying negativity brooding when two groups become estranged: one that finds Group-‘Us’ invariably donning a posture of superiority wedded to partiality. Having gone that far, almost in knee-jerk response, by contrast they view Group-‘Them’ as necessarily occupying a position of inferiority.

Supporting this dark predilection in in-group behavior, according to Handel’s paper, research has shown how easily people become susceptible to group bias; even over the most meaningless of group comparisons. Conclusion: there’s apparently no lower limit, no floor, setting the boundary at which group bias against another group can no longer be triggered.

Implications-wise, this frequenter of workplaces, all-around kibitzer to toxic work environments—‘Us-Them’ mentality—comprises an issue not to be taken lightly in any work setting and even in a number of informal social settings as well. 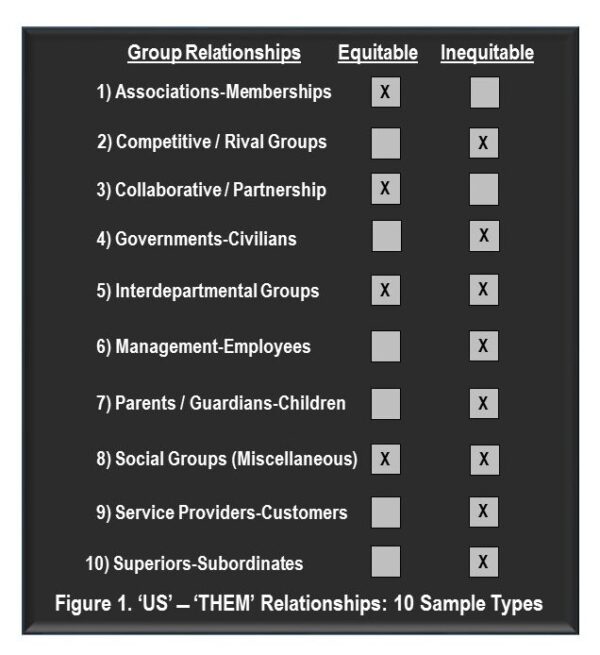 However, despite this phenomenon’s apparent potency, not all ‘Us-Them’-prone groups suffer a relationship disequilibrium; not all are unfair to the point of prejudicial and unjust conduct being exhibited by an omnipotent in-group. A sample of group relationship types is listed in Figure 1. Depending on the type of group relationship in force, and its context, inequality may even be rightful and mutually expected: then again, as is obvious, not to a point of being abusive and injurious. Four of the sample of 10 types shown are characteristically equitable by their nature; with only the occasional instance or two of deviation-from-normal occurring in two of that cluster. However, 6 of the 10 typically exhibit group inequality. Incidentally, superior-subordinate relationships is a catchall category for sponsors-protégés, teachers-pupils, trainers-trainees, and military drill instructors-recruits, to name a few.

‘Us-Them,’ with regard to military usage, worldwide, has always been found to be useful-to-a-fault, and in an appalling way: whereby ‘Them’ gets conveniently fitted with various surrogate denigrating labels designed to dehumanize and debase the enemy. In World War II, the Germans were pejoratively dehumanized as Krauts. In View Nam, the Viet Cong were degraded as gooks, or zipper-heads. In the Gulf War, the Iraqis were called ragtops. In every instance it made the transition easier for our soldiers—the ‘Us’—to wage war with our enemy, ‘Them.’

Again, the ‘Us-Them’ disequilibrium isn’t a certainty. In research, in some athletic arenas, in philanthropy, and purportedly in journalism, if there’s an ‘Us-Them’ presence to be found, objectivity and parity win out. Ethics and professionalism are sometimes successfully stalwart guardrails against inborn group biases and overt/covert power grabs to secure favor by adopting a position of ‘Us.’ That said, if attempted, one could probably draft a list of a score/more of categories that are susceptible to societal ‘Us-Them’ schisms (see sidebar figure). 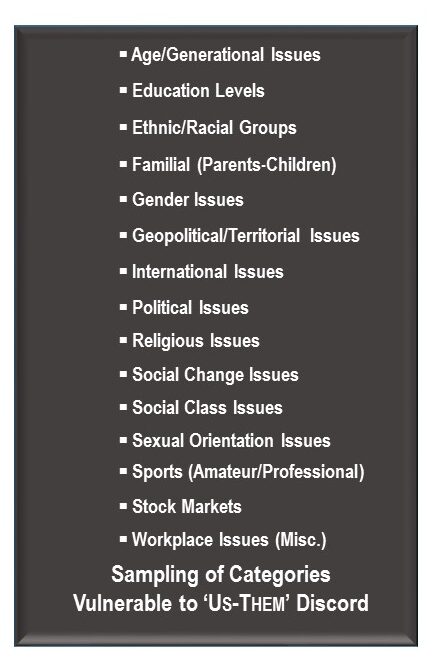 The ‘Us-Them’ social blind spot is clearly evident in politics, religious circles, runs amok in world affairs, and also invades our private lives on a routine basis. For example, now mature adults, some children have patiently watched the years pass by, still waiting for their parents to start responding to them as grownups of equal stature, worth, and respect. But biases are not always so innocently unknown. In fact, they can be quite willful and openly exhibited.

Which is why I believe Handel’s thesis that an in-group’s aberrant behavior stems from irrational group bias is accurate only initially—at its onset. However, over time its norms and practices become more rational from the standpoint that the means—biased norms and practices—now instrumentally serve various coveted ends; that is, all manner of added in-group advantages. As Figure 2’s outer ring depicts, with every embryonic ‘Us-Them’ thought or utterance, with an uncanny force similar to a nuclear blast’s pressure wave rippling forth: power gets unequally distributed; the divisiveness of ‘Us’ and ‘Them’ takes on darker tones; ‘Us’ then self-assigns privilege and prestige. Now on a roll, ‘Us’ malignly assigns disadvantage and lesser rank to ‘Them;’ ‘Us’ next adopts carte blanche in their treatment and handling of ‘Them.’ 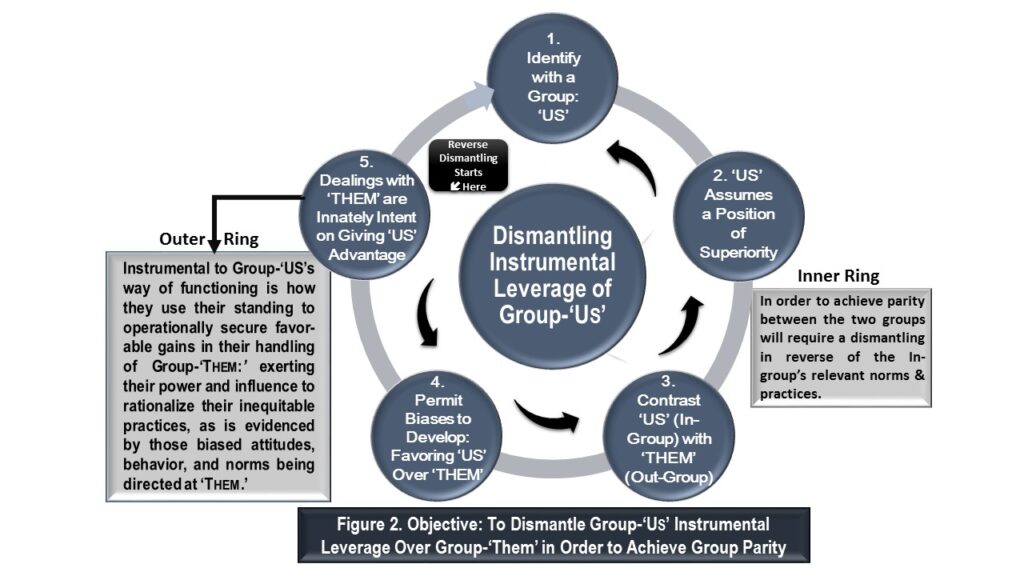 Regardless of situation and setting, count on ‘Them’ having poor prospects for faring well. A nuclear fallout of unfair, sometimes ridiculous, sometimes harmful, practices will befall ‘Them’ under the whole or partial influence of an omnipotent and covetous ‘Us.’ A flurry of examples of abusive and injurious actions toward ‘Them’ surge readily into foreground:

Irrespective of whether it’s an informal groups setting, or formal groups setting within an organization, the same correctional approach is taken: referring back to Figure 2’s inner ring, it becomes a matter of dismantling what’s been erected and replacing it with something more equitable. Group-‘Us’ will need to conduct a ‘leverage-dismantling workshop,’ following the steps listed next.

Finally, readers who’re considering attempting a group or organizational renewal based on a more equitable relationship with another group/organization: you hopefully possess enough social capital to have considerable sway (as well as tact and diplomacy) behind your entreaty. Social capital is basically the amount of good will and merit you’ve amassed over time for your allegiance, contributions, and aptly fitting-in with your Group-‘Us.’

Handel, S. (2020). The us vs. them mentality: How group thinking can irrationally divide us. The Emotion Machineblog. Retrieved 12/14/2020 from: https://www.theemotionmachine.com/the-us-vs-them-mentality-how-group-thinking-can-irrationally-divide-us/

Benjamin Ruark's career began in behavior therapy in corrections, later switching to instructional technology, then continuous quality improvement and evidence-based practice (EBP) consultation and specialization. He has a Master of Science degree in Curriculum and Instruction from the University of Wisconsin-Madison, a Master of Science in Education and a Bachelor of Arts degree from Western Illinois University. Now retired, he's written essays on subjects related to media violence in American society, improving performance, healthcare practice, conservation, EBP, and business practices.