The boxy TV sets emerge from a thick bed of live ferns like gigantic mushrooms on a primeval forest floor. A video program plays simultaneously on all 49 TVs: disco dancers rocking out to “Devil With a Blue Dress On,” Buddhist meditative music, Beethoven’s Moonlight Sonata, a Japanese Pepsi commercial, Bill Haley’s “Rock Around the Clock,” Allen Ginsberg chanting.

Welcome to the world of Nam June Paik, a pioneer in the merger of art and technology and the subject of a lively retrospective that just opened at the San Francisco Museum of Modern Art. His televisions-and-ferns installation, TV Garden (top image), combines many of his obsessions, including video, music (both classical and pop), dance, sculpture, Buddhism, and a playful mash-up style that harks back to Dada and Surrealism.

Unlike some of the more offhand pieces in the show, TV Garden is a fully realized work, filling an entire gallery with an imagined environment. First created in 1974-77 and reconstructed in 2002, it offers the visitor a multisensory experience: the visual flash of the often manipulated video program, the wildly contrasting elements of the soundtrack, even the fresh garden smell of the plants.

Paik (1932-2006) was born in Seoul, Korea, studied music at the University of Tokyo, and lived in Germany in the late 1950s and early 1960s. There he came under the influence of the avant-garde composer John Cage and connected with the Fluxus modern art movement. He also began to exhibit multimedia installations that combined art, music, and performance with electronic devices such as record players and television sets. He moved to New York in 1964, where he became a key figure in the art and technology movement. 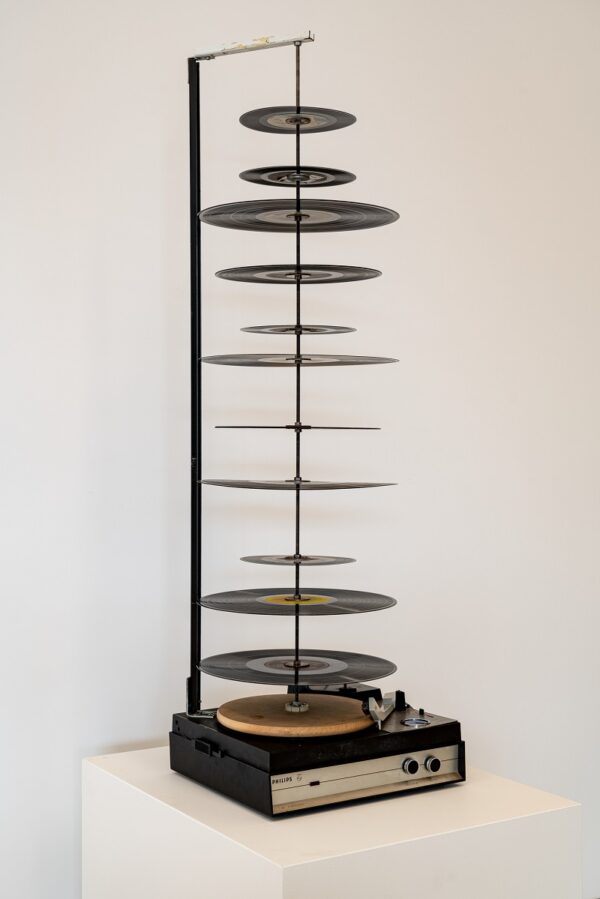 Some of Paik’s works from his German period now seem like relatively conventional modern sculptures made of found objects. Random Access (Record Shishkebab) of 1963, for example, modifies the central post of a Philips phonograph, extending it several feet above the platter to support almost a dozen records spaced out like slices of meat and vegetables on a skewer. It’s visually clever, but there’s really no multimedia technology involved. 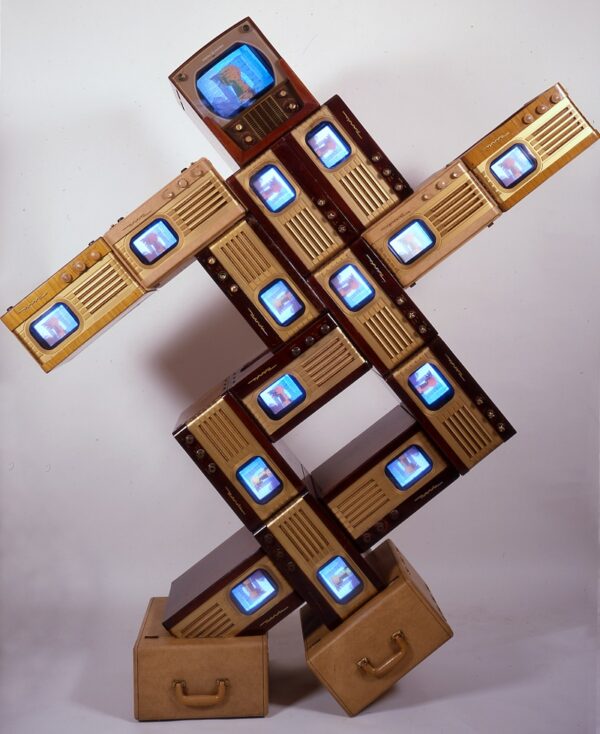 Merce / Digital of 1988 is a more complex and polished work, an energetic sculptural homage to one of his New York mentors, the modernist choreographer Merce Cunningham. Paik combines 14 antique Motorola radios (with small video screens inserted in place of the radio tuning screens), plus one larger video monitor and two portable record player cases into an amusing image of a dancer with his body tilted, legs crossed, and arms outstretched in a gesture of jazzy joy. It’s a wonderful assemblage, though the actual video component remains relatively minor.

Much of Paik’s work in both Germany and New York was essentially performance art, often in collaboration with others. One of his most important partners was the avant-garde cellist Charlotte Moorman, who played (or pretended to play) a wide variety of Paik’s electronic contraptions in New York performance events. Most famously — and scandalously — she played her cello on several occasions while topless or stark naked or covered by, for example, plastic sheeting or a bra made of video monitors. (Moorman is the woman seen in the top image in TV Garden.) 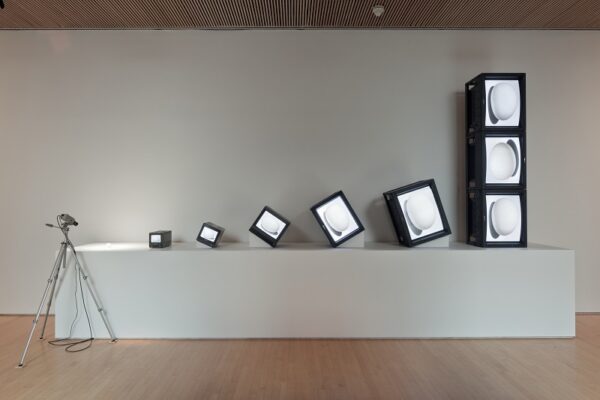 Still, some of Paik’s works were clear and elegant rather than complicated and ambiguous. Egg Grows of 1984-89, for example, displays a small video camera and tripod on the left, focused on an ordinary egg casting a shadow on a white platform. The resulting black-and-white video image is displayed to the right in a series of ever-larger tilted monitors on the platform, culminating in three TVs stacked on top of each other. The egg images get bigger in each position, creating the illusion of growth from what is really a very simple idea. 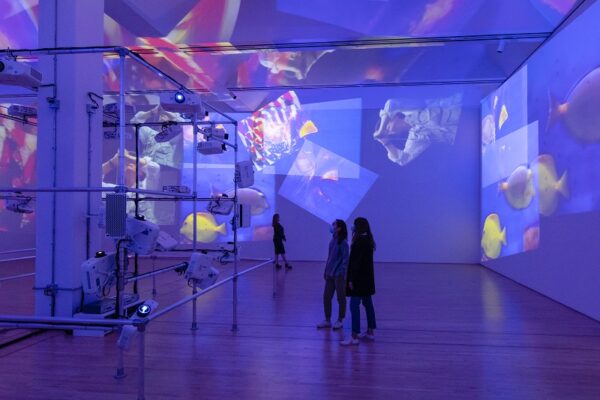 The opposite approach — colorful, complex, noisy — defines A Sistine Chapel of 1993, the largest and culminating work in the exhibition. A huge array of video projectors and speakers are mounted on tall metal scaffolding in the center of the large gallery space. They simultaneously flash a series of overlapping video feeds on the walls and ceiling, in a range of colors, while a soundtrack of multiple sources blares at full volume. Rather than frescoes of Adam and Eve and the saints, the images range from Alvin Ailey dancers to a school of colorful tropical fish, from Dick Cavett’s talk show to Lou Reed playing his guitar to a buxom blonde writhing in the nude on a bed-size American flag.

If the idea is to overwhelm the viewer, the work succeeds magnificently. If it’s to convey a coherent message, maybe less so. But it has plenty of energy and an anarchic sense of humor, and that’s more than enough to grab your attention.

The exhibition was co-organized by the Tate Modern, London, where it opened in November 2019, and then traveled last year to the Stedelijk Museum Amsterdam. After its SFMOMA run, it will open in December at the National Gallery Singapore. An extensive catalog is published by the Tate.