Karaoke Therapy: Surviving the Pandemic One Song at a Time

Before the Pandemic, I was a regular at karaoke clubs. I don’t consider myself a professional singer, but I was once asked to audition for The Voice by one of their scouting producers. Naturally, I was flattered, that is until I waited for a response and was completely ghosted. But it never dampened my enthusiasm for karaoke. I’ve been karaoke-ing for many years, satisfying a theater fix that had been incubating since my days performing in high school musicals. I had always been somewhat of an introvert, but performing gave me an outlet that brought me out of my proverbial shell. Before the pandemic, when I traveled on vacation, the first thing I’d do was try to locate the nearest karaoke joint. I’ve done karaoke in Santa Barbara, San Diego, Palm Springs, New York, Montreal and yes, even Florence, Italy. But when the pandemic hit, my karaoke fix came to an abrupt halt. Congregating in bars was no longer an option and sharing a mic with strangers was out of the question. Even now that the pandemic is coming under control, it’s still an open question as to when it will truly be safe to congregate in public again and sing. 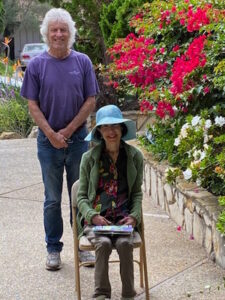 Performing for my socially distance audience of two.

As much of a karaoke addict as I was, it took a pandemic for me to buckle down and get my own karaoke machine. I got the Pedestal ism1030BT from The Singing Machine, the company made famous by James Corden’s Carpool Karaoke. I figured if it’s good enough for James Corden who’s performed with everyone from Madonna to Paul McCartney, it’s good enough for little old me. It was surprisingly affordable and once I got the hang of it, I was hooked. There was some assembly required, but nowhere near as complicated as the IKEA cabinet still sitting unassembled in a spare bedroom. Being somewhat technically challenged, it took me a minute to figure out how to interface with our smart TV in order to access free songs for my set list. But once I did, I was off and running. Being able to practice in the privacy of my home was a game changer. I could work out the kinks before putting on a show for friends and family. Having something to prepare for on a weekly basis broke up the monotony of a Groundhog Day like existence. This particular model karaoke machine even has a USB port to record your performance.

I hosted my first mini-concert four months ago on Christmas Day 2020. My sister and her husband brought some folding chairs and parked themselves in our front patio and I performed a set of about four songs. It went well. My sister in particular who’d been really hard hit by the pandemic blues found the concerts lifted her spirits and let her escape into another world. You don’t have to be a scientist to understand that the mere act of singing, be it in a shower or before a stadium of fans, releases naturally occurring endorphins more commonly known as mood boosters.

I never realized I had the power to uplift someone’s spirits just by singing. It felt good. And so it became a weekly ritual. I’d rehearse potential songs during the week, testing them out with my 94-year-old mom (whom I joke is my biggest fan and my number one critic) weighing in as judge and jury. I realized that as the weeks wore on, my vocal range was improving and I learned how to use the machine’s features to enhance my vocals. No, I don’t use auto-tune, but the echo feature makes a world of difference. I used to have a pretty limited repertoire of songs within my range that I knew I could hit out of the ballpark. But now that list has grown (60 at last count), and along with it, my confidence. I still miss the camaraderie and the fun that comes from singing in a public venue. But until it’s safe to return, having my own karaoke machine has been a lifesaver. And when it is safe to return, I’ll have a whole new repertoire at my disposal.