Kharkiv and My “Grandpa Meyer”

Kharkiv is the 2nd largest city in Ukraine. It’s now being pounded by Russian troops & missles daily, fighting desperately for its life and survival.

It’s also where my paternal grandfather, Meyer, was born. 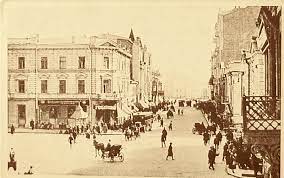 I always wanted to, and planned on, going there, to see the place my grandfather was from. But I when I finally went to Russia in 2018 to teach theater in Moscow, I didn’t have time to go east to Kharkiv.

You can see in these photos I’ve posted – a piece of paper I gave to my grandfather, on his death bed – in Miami – in 1970. On one side, he signed his name in Russian, and on the other side, he gave me the address of his brother “Mark Truleser” in “Khartov”, the home from where he fled in 1917. (I didn’t know until this recent war, that he was from the 2nd largest city in Ukraine, “Kharkiv”, with a different spelling.)

Like so many immgrants at the early part of the 20th century, Meyer came through Ellis Island, where the immigration officers changed his name and left him with 6 letters, “Trules”. He met his wife-to-be, Anna, who I never met because she died around the time of my birth, in Brownsville, Brooklyn, where he worked as a house painter. I still have an ancient trowel, that he used to plaster walls back in the day – hanging above my washing machine.

I didn’t know my grandfather, Meyer, very well. He was hard of hearing, spoke with a thick “Russian” accent, and didn’t visit us every weekend in suburban Westbury, Long Island, like my mother’s parents, Sally & Murray, who my sister and I called “Nanny & Poppy”. They were also from Ukraine, I think from Odessa, and they brought piles of groceries to us in carboard boxes from their grocery story in Middle Village, Queens. In contrast, my “Grandpa Meyer” was a hard man.

Even my father and his sister, Daisy May, had a contentious relationship with him, their own father. When he sat down for a meal at the kitchen or dining room table, he had real trouble chewing his food, probably because of bad dentures, and my sister and I were disgusted by our own grandfather.

I remember one day in our grassy back yard in Westbury, Meyer challenged me to a running race, across the manicured yard, maybe 50 yards at best. I didn’t want to do it. Meyer was “old” and I must have been about 12, but he insisted. My father and siter were there, “refereeing”, and they started the race with 2 shouts.

I took off like a hornet, leaving old Meyer behind, but after only about 20 yards, he screamed out in pain and fell to the ground. He had torn a calf muscle. Boy… did I feel horrible… like it was MY FAULT that my grandfather was injured – lying there on the ground in pain.

And then, years later, when I was about 23, here he was lying on his death bed in Miami. I knew I wasn’t the cause of that, but still, I felt terrible. I didn’t yet know much about death at that age, and it was hard to lose him. Honestly, I don’t even know what he died of.

But I’ve kept that sheet of paper all these years… and always vowed to go to “Khartov” — to find the home of Marc Truleser. Until now, that is… when “Kharkiv” is in the daily news, fighting for its life and survival. Hundreds, or thousands, of citizens in Eastern Ukraine, are getting pummelled with rocket and gun fire, ballistic missles, their onion-domed Orthodox churches, like those in Kyiv, are being crumbled into

Blood in the air, on the white snow, and on the faces of millions of Ukrainians.

It brings the war home to me personally, as I read obsessivly about it in the LA Times every day. It seems that there is no end in site, except more bloodshed, pain, loss, and destruction… until the inevitable… crushing defeat and submission to Mr. Putin.

Of course, I hope that the defiant Ukrainian resistance will prove me wrong.

But in memory of Grandpa Meyer, I kneel,

and shed a tear for him, and his brave, invaded Ukrainian countrymen. Listen to his travel podcast, “e-travels with e. trules” HERE