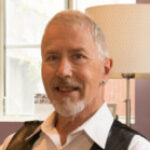 Lee Rossi is the author of Wheelchair Samurai, his latest book. His poems, reviews and interviews have appeared in The Sun, Poetry Northwest, The Beloit Poetry Journal, and The Southern Poetry Review. He is a staff reviewer and interviewer for the online magazine Pedestal.

If he had a face, it would include his mother’s ears,
his father’s sharp, insistent nose, the basset’s jowls,
and eyes deeded by a consortium of Picts and Celts,
Romans and Jutes, a thin, watery northern
blue in which fog and cloud is constantly
trying to form. He is wary of such a face, watching
as his sister and brothers battle over breakfast.
Every morning he studies himself
scouring his already rotted teeth – how many
cavities since his last birthday?
He sucks his cheeks, flares his nostrils,
wears his hair as long as he can, its pale
surf barely cresting his extravagant ears.
He is proud that he does not resemble any
of them, that he doesn’t even look like himself,
but like a grave digger, or a grave robber,
like a backyard mechanic, or a salesman
selling Bibles door-to-door, like an albino
gypsy, like a refuge from some television camp
for the dispossessed in Africa or the Middle East,
some genetic freak left on a hillside to die
who miraculously survives only to be sent
into exile to foster with these strange familiars.

If you should ask me when or how,
reluctantly I’d answer why –
the soil that rises from the plow
but does so with a sigh.

When Brer Fox tossed the Rabbit
into that dense tangle of thorn,
he was doing what we all do,
condemning others as we
would condemn ourselves.
If he had spent his youth
among the canes,
he’d have known
how companionable those
narrow halls can be.
I think about the women
on my computer screen –
all those clear-cut hillocks –
and women I’ve known,
their genital fuzz or fluff
downy as dust bunnies,
and then I consider my luck
in finding you, adorned
with sprigs of tough
wiry hair, a dark halo
surrounding each nipple,
and the insistent scribble
from navel to nest,
where only the most
delicate coaxing –
tongue chafed and littered with thicket –
reveals what the fox
could only dream,
a secret passage, the way through.

View Author Archive
Lee Rossi is a winner of the Jack Grapes Poetry Prize. His latest book is Darwin’s Garden, from Moon Tide Press. Recent poems appear in The Southwest Review, Rattle, Poet Lore, Spillway, The Chiron Review and The Southern Review. He is a member of the Northern California Book Reviewers and a Contributing Editor to Poetry Flash.