WHEN MY FATHER WAKES UP

on that first sweltering night
of that first scalding summer,
soaked in sweat like my mother

when she suffered those terrible
hot flashes forty years ago,
he stumbles out of bed

and lumbers to the archaic air
conditioner, fumbling for the right
button to bring it back to life

with a wheeze and a groan and
a thump. Next he shuffles across
the faded carpet, slides between

the worn sheets, and lifts the torn
blanket to cover my mother
who will surely grow stiff

from the frigid air blowing
between them as she had
for more than sixty years.

on the other side of town
wrapped in a shroud beneath
the stony stubborn ground?

How he missed her old cold shoulder

not a stroke
of genius
it was not

a stroke
of luck
it was

a stroke
of misfortune
that befell

my father
leaving him
crumpled

at the foot
of the driveway
next to the garbage

waiting
all morning
to be picked up.

THE PEOPLE NEXT DOOR

fight every night,” says my father,
his raspy voice rising on the phone.
“They yell, they scream, they

anything, even the cops can’t make them
stop. I don’t know how they allow it.
I haven’t had a decent night’s

sleep since I moved in here.
I’ve never heard anything like it.
I swear I’m losing my mind.”

who fixes everything.
I am the daughter who doesn’t
have the heart

to tell her disturbed
and disturbing father
there are no people next door.

Click here to purchase I Wish My Father by Lesléa Newman 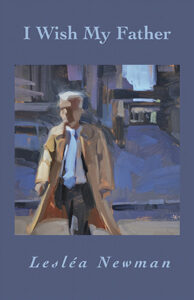 Lesléa Newman is the author of 75 books for readers of all ages including the poetry collections “Nobody’s Mother,” “October Mourning: A Song for Matthew Shepard,” “Still Life with Buddy,” I Carry My Mother,” and “I Wish My Father.” She is also the author of many children’s books including “Gittel’s Journey: An Ellis Island Story,” “Ketzel: The Cat Who Composed,” “Here Is The World: A Year of Jewish Holidays,” and “Heather Has Two Mommies.” Her literary awards include poetry fellowships from the National Endowment for the Arts and the Massachusetts Artists Foundation, the National Jewish Book Award, the Massachusetts Book Award, and the Association of Jewish Libraries Sydney Taylor Body-of-Work Award. From 2008 - 2010, she served as the poet laureate of Northampton, MA. Currently she teaches at Spalding University’s School of Creative and Professional Writing.