– after Sharon Olds, “No Makeup”

I’ve resisted paint for so many years,
resisted the chance to be like my mother.
My reflection hangs
in all the mirrors I refused —
bathrooms, college dorm rooms,
bedrooms, the makeup counters
I passed by,
the places where I could have
“put my face on” the way she did,
but I didn’t.
Now,
it’s time to start doing my face,
make marks with horsehair brushes
pulled across my bones
to bury age
in layers of stuff — primer and concealer,
foundation, bronzer and blush.
I don’t want Marilyn’s Vaseline undercoat
to make my skin glow
like the feverish face of a hospital patient
or a woman in the throes of labor.
I won’t outline my eyes in black,
all around, à la Liz,
or paint my lips into a pout like Sophia.
But,
there’s something to admire,
something to love about the way
my mother stood,
cigarette in one hand, lip brush in the other,
the way her red lips curled
above her overbite
Tonight,
here I am, looking
at YouTube makeup videos,
longing for lush lips and velvet brows,
hungering for my “hooded eyes”
to be young again,
learning ways to soften the lines
and shadow the lids,
making my face
into some semblance
of who I think I was.

In the beginning, marriage was a delicious ceremony,
midsummer amid pines, needles softening underfoot,
followed by new percale sheets,
smoothed onto a hand-me-down double bed
where laughter and sex-wet nights rained down.
We’d heard that the migration of days
would dull the lust, but not that the dryness
would come so early. When long nights of love-making
became long days of clocks and books and a typewriter
on the breakfast table. When the breakfast table
became the lunch table, the dinner table,
the baby changing table by the bassinette.
When I won at cribbage, and he threw
his coffee mug against the wall.
One New Year’s Eve I wrestled with an earache
and my guilt for keeping us at home.
At least you’re learning how to cook, he said.
An absurd comfort. The baby cried.
The baby grew into a boy. Another came.
And the house with the lemon tree
and a view of the Pacific. But we never saw
the world through the same kaleidoscope,
even as we both saw the dog
eat the lemons that ruined his teeth,
and we both loved sitting at the edge
of the ocean in matching beach chairs.
We said we would hold on to the dirt
of marriage, hold on to it for life,
until we were hanging on for dear life.
No one said, Sorry,
I’m so sorry, I’m so very sorry.
The marriage bled until it became a wound
we could not close.

She will always sit, naked in shades of ochre and desperation
emanating from her posed body, always be a woman
sitting before the artist who might
(or might not) be god.

There always will be the canvas, maybe a background tree, a lake
in the distance—brushes standing in a clear glass vase,
objects in the foreground
on a wooden table.

The woman doesn’t want to stay on the sheet of linen,
possibility of movement a passing thought,
however. She remembers the artist,
his soldered face, permanent scar
below his mouth,

the hand-sewn patches on his chest, candles in the window
burned all the way down. She thought his leaving
was as temporary as the ochre sky
and the three-year hunger
he left her with.

Her story: an inert body circling the loneliness
of Cyclops, history lessons turned and torn.
Sitting, knees pulled to her chest,
she contemplated

the ochre air and chalk clouds surrounding her.
It would take an act of violence to escape,
but so far away the knife, hanging
from its magnet on the wall. 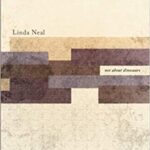 View Author Archive
Linda Neal's poems reach toward the ecstatic and explore the quotidian. Her chapbooks and first collection, Dodge & Burn, detail experiences of loss and grief. In Not About Dinosaurs, she digs deeper into questions of love, longing and loss, traveling the arc of life and contemplating matters of death and extinction. Writer, meditator, therapist, teacher, wife, mother, divorcee, widow, dialysis and transplant patient, she is the daughter of an engineer and a pin-up model. She grew up in the South Bay area of LA under the spell of The Wizard of Oz, Marilyn Monroe, James Dean and The Bomb. Over the years, she has founded and run several reading series and led writing and meditation workshops. She is editor-at-large for ONTHEBUS, a journal of art and poetry. She holds a Master of Fine Arts in Poetry from Pacific University. Her poems and memoir pieces have been accepted for publication in many journals, including Calyx, Chiron Review, Crosswinds, Lummox, Prairie Schooner and Tampa Review.