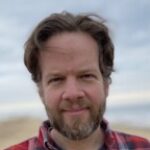 Keepers of the House

The day the keepers of the house tremble and those that look out of windows be darkened,
because man goeth to his long home, and the mourners go about the streets – Ecclesiastes 12:5

In his apron, Vincent plucks the vivid Italian cookies,
doubting correctly They’re for my girls,
& slaps his gut, Nothing wrong with a sweet tooth.
His name’s tattooed elbow to wrist in cursive,
neck adorned by a thin gold
cross, telling me the drugs are why he left town.
Turning into Gloucester…poison just handed out to kids.

I hear you. I’ve read the epitaphs of morning texts,
learned the limits of a teacher’s influence,
& haven’t seen the last of the young shadows
like the one my colleague follows
home from school, trailing the specter
of powder & the silence of a son,
like the two ghosts in my classroom who return

to take their seats when I open the window
for the breeze. When they’re listening, I preach:
trust yourself, speak, don’t court danger,
but I’m talking to myself. I regret I never told them
that I used to relish that back tongue bitterness,
taking emptiness for oasis. Friends died,
but I was lucky. When I needed safety, I still had keys

to the house I couldn’t wait to leave.

The body above the graves
of Oak Grove Cemetery
holds its post. No hangdog
face, no fretful ghost
in the light. It does not shine
a reminder. A biding,
If not today, perhaps tomorrow.

My daughter lowers her mask & says,
It’s peaceful here, & shows me
a rose quartz headstone,
private by the pines.

Distancing this spring, she discovered
the older plots & the family vaults
blocks from our house. I thought too dark,
her walks listening to Love
Will Tear Us Apart, but that’s the draw
for both of us, melody stained
away from brightness.

I know these dead saw worse
omens come true. Wars we choose
to know about. Soldiers too soon
shorn threads. This daylight
moon says some curses are just
the worm turning the soil
for a crop we’ll never see.

That’s fair, her phrase returns
to me. This isn’t a plague, &
I don’t believe in curses. The moon
keeps our quiet, looking on like
a father, but only a follower.

The Apple Tree at Bar Harbor

Where the tide turns out its pockets,
this prosperous one stands,
roots upending stone, loaded branches
a stone’s throw from smug
lawns that extend a tenancy built
against the ledge. Tourists speak French &
German. You talk to me about the way
the West will never be returned
to the single voice of experience,
nature & the mind of one being born,

but the body, having learned too early
its loneliness, stays merely Earth’s
fearful admirer. Taught to be guarded,
man less than woman. Bedeviled together,
we wonder at the East, raised without sin,
who live seeing the fruit as a gift, just
a misty welcome on the stem, & eat
the sense’s peace down to the seeds,
feeling no separation. In the fog, our girls
race the edge, tempted to shake the tree.

View Author Archive
Max Heinegg is the author of Good Harbor, winner of the inaugural Paul Nemser Poetry Prize, forthcoming from Lily Poetry Press in March, 2022. He lives in Medford, MA with his family, and teaches high school English at Medford High School. He is also a singer-songwriter whose records can be heard at www.maxheinegg.com