First, let me say that I finished this piece just days before the Charlie Hebdo attack in Paris. “Je suis Charlie,” and I have not changed a single word. On Friday, January 2, I read, with distress, in the Los Angeles Times‘ “Year in Review” a grim and disturbing piece entitled “Militant Islam’s 2014 March”. In it, Carol J. Williams recalls, in shocking detail, the disturbingly violent assault of extreme religious Islam on both the East and the West:

In April, Boko Haram abducted more than 270 Nigerian girls and dispatched them to sexual enslavement. As the year drew to a close, the Pakistani Taliban slaughtered nearly 150 students and staff at a military school in Peshawar.

Boys attending Christian or secular schools in former British colonies in Africa also have been slain for their beliefs.

Islamic State overran a third of Iraqi and Syrian territory, which it proclaimed a transnational Muslim caliphate, and rocketed to international attention in the spring when it seized Iraq’s second-largest city, Mosul. Foreign diplomats, nurses, truck drivers and construction workers were taken hostage and released for undisclosed ransoms.

And closer to home:

The Islamist militants’ shock tactics were spotlighted in their August video depicting the beheading of American journalist James Foley, one of at least 20 reporters who had gone missing while covering the war in Syria. Foley’s grisly death was followed by similar executions of American freelance journalist Steven Sotloff, British aid workers David Haines and Alan Henning and U.S. Army veteran-turned-relief worker Peter Kassig.

This is, inarguably, very brutal and shocking stuff, directly in the crosshairs of international news. What the fuck are the Islamists thinking and doing? I mean, let’s be honest here, no amount of political analysis, religious tolerance, or moral apology can make any of it any easier to stomach. Right? I mean, right? In 2002, I was in East Malaysia on the island of Borneo in the South China Sea, on an eight month Fulbright grant at UMS (Universti Malaysia Sabah) in Kota Kinabalu, one of the 2 different Islamic universities where I was asked to teach theater very shortly after 9/11. Of course, I received the grant long before 9/11, but when it was time to leave on my pedagogical adventure in December 2001, not one of my friends or family encouraged my going.

“Are you crazy? You’re taking your life in your hands. They hate Americans in Malaysia!”

“C’mon, Trules, we know you’re a risky, think outside the box kinda guy, but are you serious?”

Yes, I told them. I was. And yes, I did go. And yes, as you can read, I did come back alive and well. In fact, I had an eye-opening, culturally-educative experience, which I hope was also a two way street.

But… once there… I did have to accept that on the screensavers of many of my Islamic university colleagues were many images of Osama Bin Laden, the religious and political fanatic who was accused of having masterminded the explosions of the World Trade Centers and the Pentagon. Public Enemy Number One. Right? What the hell was his image doing on my educated colleagues’ screensavers? 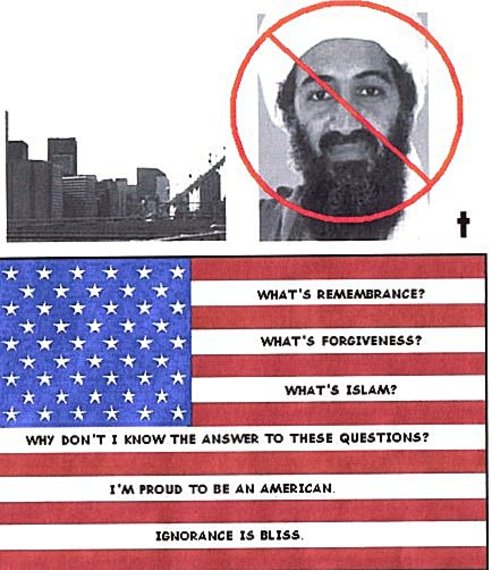 Well…. I came to understand that, in fact, Bin Laden was a hero in the Islamic world. In their eyes, he was the only David on the planet to have stood up to Goliath George W. Bush and his hegemonic “empire of evil.”

Wait! They have that backwards. Wasn’t Bin Laden the outlaw leader of the “empire of evil”? And if so, then why was Bin Laden’s image also on thousands of multi-colored t-shirts all over the shopping malls of Kota Kinabalu?

That’s when it hit me: cultural and religious relativism, Trules.

It was hard to stomach at first. It literally made me sick in the beginning every time I saw the image of the mad, bearded terrorist on a colleague’s computer screen. But over time, I came to…accept it. I came to…understand. I mean, my colleagues didn’t seem to be personally angry with me. They let me share my very individualist American style of theatrical storytelling and improvisation in their very repressed and community-minded society, and they left me alone, for the most part, with my un-married “fiancé,” which was very “haram” in their culture. They probably never knew I was a Jew, and they didn’t stone either of us to death for our illicit practice, even when some of them had four wives each. I was grateful for that. I certainly wouldn’t have wanted to end up like the protagonist in the brutally beautiful Persian-American film, The Stoning of Soraya M.

Fortunately, I didn’t. Which eventually brings me back to 2015. To the upsetting march of militant Islam across the deserts and dynasties of their “enemies,” well over 14 years after my return from Malaysia in 2002. Finding ourselves still virulently entangled in an interminable and barbaric modern Crusades. Or at least in its modern equivalent: a clash of civilizations, between Islam and the West. Yes, it’s an awful moniker, but… doesn’t a “clash” require two mighty forces hurling themselves against each other at full speed and colliding? Not just one force brutally rolling over another? And specifically, to refer back to Ms. Williams’ LA Times piece, what about our extensive, and still current, military drone history in the Middle East? Magically and technologically killing our enemies from toy planes in the sky? To say the least, it is a morally complicated and controversial embroilment.

Not being able to capture Bin Laden or his endlessly replaceable network of Islamic terrorists by conventional means, we have resorted to high tech eradication. Unfortunately, it is not only of our terrorist enemies, but frequently… also of their entire families…. and sometimes also of countless other innocent victims along the way. This is the ugly scorecard. Many Muslims. A few Americans. Many Palestinians. A few Israelis. Not equal. Not fair. Might makes right. “Collateral damage,” as the apology goes.

But do you actually think that that term of Western righteousness holds any water for the Islamic family members of women, children, brothers, sisters, mothers, and fathers, blown apart by these American “weapons of mass destruction”? Heresy, right? To pose such a question. How can I be accusing my own country, the great Red, White, and Blue, of terrorist acts of mass destruction? Well, I am. And it’s true. And… unfortunately, there is no end in sight

“You kill my people. I will kill your people!”

So… the next time we read another tragic and disgusting international headline about the brutally violent campaign of radical Islam, about its beheading of another American citizen, about its rape of its own religion’s women, about its destruction disguised as protection of its own culture, about its unforgiving sharia law, let us give pause… and think about the other side of the clash. About what we seem to be doing to provoke such violent anger and “retaliation”. About how we are policing the entire planet, occupying foreign lands, and propping up American puppet politicians around the whole world, all in the name of American exceptionalism and most probably, in the name of “God being (exclusively) on our side”.

It’s a big, bad complicated world out there. And we are engaged in a very complicated political-social-religious-moral dilemma such as the world has perhaps not seen in millennium. What with the speed and power of the internet, the animosity towards people who don’t believe as we do, and a cycle of international violence that doesn’t seem to have any end in sight, we seem to be in for a tough 21st century.

All I can say is about that is… it’s a two way street. And… “fasten your seat belts. We’re in for a bumpy ride!”

And if you live in or near Los Angeles, please come see “AN EVENING WITH ERIC TRULES” on January 17, 2015 at 8pm at Beyond Baroque, LA’s most historic and prestigious literary venue. Facebook link: www.facebook.com/events/660916847359466/