The poetry community of Los Angeles is built and maintained and reimagined and rebuilt anew primarily by its practitioners. These poets devote time they might otherwise spend writing to founding and running magazines and small presses, opening or staffing bookstores, curating readings and offering workshops. Through their labor they feed the community so that it might grow, become more diverse and inclusive, so that talented voices do not go unheard, and so there will continue to be a place for us to practice and to touch readers.

This community service, this literary citizenship is almost always unpaid or so minimally compensated as to feel unpaid. It is often unrecognized and unsung. It can only be called a labor of love—love of creativity, love of language, love of poets and writers, of readers, and love of Los Angeles itself. Like the web of tree roots and fungi beneath the soil that provides a communications network for those trees—scientists call them mycorrhizal networks, unseen to those who live only on the surface of the earth—this devotion by poets does knit itself into an infrastructure for this city. Such love should not go unrequited. 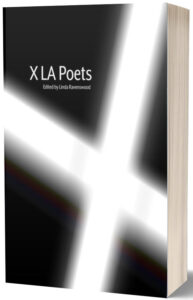 Arising from exactly this fervor is the new collection, X LA Poets, edited by Linda Ravenswood and published by Hinchas Press. Linda is one of the poets who is building the poetry home she hopes to reside in, enlarging the rooms to accommodate more voices and tending a garden to grow for many seasons.

In X LA Poets, we find the work of ten (one of the meanings of X) women and womyn-identified poets. This gendered choice is intentional, although it’s left to the reader to supply their own significance. Each poet currently practices in Los Angeles and often reflects or reflects upon the city in their work. The poets are Shonda Buchanan (SB), Teresa Mei Chuc (Chúc Mỹ Tuệ) (TMC), Allison Adelle Hedge Coke (AAHC), Arminé Iknadossian (AI), Rachel Kann (RK), Viva Padilla (VP), Linda Ravenswood (LRa), Chelsea Rector (CR), Luivette Resto (LRe), and Lynne Thompson (LT). They represent different generations, different publishing histories. Different native languages. Each poet is represented by multiple poems, so we’re given a chance to enter into their sensibilities and poetics, which differ noticeably from one another. This collection is not intended to enshrine a Los Angeles (or for that matter, a women’s) aesthetic, but to argue for its multiplicities.

And yet, collected as they are here in X LA Poets, the voices begin to converse, like those tree roots, echoing one another or adding new strands to the discourse. So I couldn’t help but consider the conjoined music of these distinct voices:

On writing: The poem was supposed to be (CR)

Who else/is writing a poem/of hope over despair? (SB)
Without our songs, who would we be? (AI)
Villanelles moaning my name as the refrain (LRe)
Before anything is a poem/it is just high entropy (CR)
Poetry must be liquid (LRa)

We make books from bread (AI)
Take the waste people breathe out/and make it into something that/will keep you alive, (TMC)
She preferred Proust for breakfast, a little Tolstoy on toast (LT)
You are my first edition/no one else gets to write notes in your margins (LRe)
If there isn’t an eye-of-the-storm, then it’s not a poem (CR)

On Los Angeles: A city ringed with false teeth (LT)

We’re Gen X/and now we are alone/nodding to each other at the farmer’s market (LRa)
Raiders games we paid gang kids to keep eyes on, hands off our wheels (AAHC)
Dante’s Trail, Biddy Mason, The Mattachine Steps, Florence & Normandie (LRa)

War makes sure to make men out of little girls (AI)
They violet. They violet and violet. (LT)

My love is a continent uncolonized by anyone’s demands. (LRe)
Look how you twist and turn towards the light (TMC)

Who is this Eve? What garden does she haunt? (RK)
She saw/the bodhisattva in her white, flowing robe riding a dragon (TMC)

Some of these poets may know one another but, I’d venture to guess, some do not. Nevertheless, as X LA Poets illustrates, they are in conversation with one another. There is, no doubt, deeper wisdom, individual and collective, to be discovered in these pages. I urge you to seek it out, to connect with this mycorrhizal network of Los Angeles poetry.

Terry Wolverton is author of eleven books of fiction, poetry and creative nonfiction, including Embers, a novel in poems, and Insurgent Muse: Life and Art at the Woman’s Building. In addition, she has edited fifteen successful compilations, including (with Robert Drake) the Lambda Literary Award-winning His: brilliant new fiction by gay men and Hers: brilliant new fiction by lesbians, volumes 1, 2, and 3. She has also collaborated with composer David Ornette Cherry to adapt Embers as a jazz opera. Terry has received the Judy Grahn Award for nonfiction from the Publishing Triangle, a fellowship in poetry from the California Arts Council, and a COLA Fellowship from the City of Los Angeles Department of Cultural Affairs, among other acknowledgments. Terry has taught creative writing in community settings for over three decades; in 1997, she founded Writers at Work, a creative writing studio in Los Angeles, where she teaches fiction, creative nonfiction and poetry. She is also an Associate Faculty Mentor for the MFA Writing Program at Antioch University Los Angeles. Additionally, she is also a certified instructor of Kundalini Yoga. From 1976-1989, she was an active participant at the Woman’s Building, a public center for women’s culture, creating art projects, teaching, serving on the Board of Directors, and as the organization’s Development Director and Executive Director. Since 1982, she has also provided management consulting services to nonprofit organizations, sole proprietor businesses and individual artists.

Tags:
Previous Article
A Review of Lesléa Newman’s I Wish My Father
Next Article
Ms. Patty