Now It’s About Getting Out

Stepping gingerly into the post-pandemic world, the Music Center returns with an outdoor summer dance series under the banner Dance at Dusk. Opening just in time for National Tap Dance Day (May 25), the debut event offers a combination of five live, Covid-compliant, outdoor performances by a trio of tapmasters, a free livestream of the final Sunday show, and a week-long public tap dance park (free with timed reservations.) The dance park visitors may pick up some steps from the trio of pros—Dormeshia, Jason Samuels Smith and Derick K. Grant performing as The Super Villainz: A Tap Dance Act for the Modern Age. A planned livestream to Grand Park did not get the go-ahead for this opening but with three more out of town visitors scheduled into July, a Grand Park live stream may still happen later. Details on public health precautions for the live audience and dance park visitors are posted at the website.  Live performances at the Music Center’s Jerry Moss Plaza, 135 N. Grand., downtown; Wed.-Sun., May 26–30, 7:30 p.m. $200 (buys a pod for four). Livestream, Sun., May 30, 7:30 free. Super Villainz Tap Dance Park, Music Center’s Jerry Moss Plaza; Mon.-Sun., May 24–30, 8 a.m. to 4 p.m. free, with reservation. Info, reservations and tickets at Music Center.

Pedestrian and non-pedestrian activities fuel taisha paggett’s latest, com.pleats.we (housecoat). Not just playing with words in the provocative title, this dancer/choreographer constructs her own definition of performance, taking over this venue with a 24/7 livestream totaling 240 hours as she aspires to a live and real consideration of Black collectivity as well as solitude in the pandemic-induced new normal. Now 30-minute in-person visits on May 22 & 23 are available for free with time-assigned reservations. REDCAT, online thru Sun., May 23 at 10 p.m., in-person visits Sat,-Sun., May 23,-24, by reservation, free. Info, tix, and reservations at REDCAT.

The first post-pandemic opening of a major venue brings the new kind of hybrid presentation, with a socially-distanced live concert followed by a streamed version. A promising combo that likely will continue as part of dance’s post-pandemic future. Over the past year, many dance companies created safe bubbles for small groups of dancers to work with choreographers, mostly for live-streamed performances although occasionally in the outdoors for limited audiences. American Ballet Theatre made safe bubbles for 18 dancers who worked with a trio of New York-based choreographers–Jessica Lang, Lauren Lovette, and Darrell Grand Moultrie. Segerstrom Center for the Arts hosted the single performance before a limited live audience and a streamed version is available this week. Along with the three new, contemporary works, more traditional ballet gets a nod with the technical showpiece Grande Pas Classique and the pas de deux from Swan Lake, Act II. Now streaming thru Wed., May 26, $25 per household. Segerstrom Center.

As of press time, all announced performances of Long Beach Opera’s production of Philip Glass’ Les Enfants Terribles with Chris Emile’s choreography are sold out. With the sell out, let’s hope Emile’s work and that of dancers Shauna Davis, Samantha Mohr, Maleek Washington, and Joe Davis will be viewable later on as part of LBO’s active online program. Long Beach Opera, May 21–23. Sold out. Long Beach Opera.

Finale, but it’s not over

The final offering of Ron McCurdy’s From Tragedy to Triumph, a seven-part, musical tour of the African diaspora draws on choreography, music, spoken word and dramatizations to zoom in on centuries of Black women struggling for equality and justice. Nina Gumbs contributed choreography to the series. The live-streamed program Call Me Triumphant! Call Me Black airs Fri., May 21, 6 p.m., free with reservation at USC Thornton.

Doing it with “style”

For 31 of its 33 year existence, performing on the stage of the Music Center was as much a prize as the scholarship awarded to the high school performing and visual artists selected as finalists in the Music Center’s Spotlight Awards. For the second year, the pandemic requires a virtual event for the 14 finalists selected from nearly 1,500 SoCal high school students who applied. Hosted by Josh Groban who participated when he was in high school, this year’s The Music Center’s Spotlight Virtual Grand Finale Performance includes dance finalists Emmy Cheung from Santa Ana and Selena Hamilton from L.A., and ballet finalists Mia Schlosser from Thousand Oaks and Natalie Steele from San Juan Capistrano. Online Sat., May 22, 7 p.m., Music Center and Facebook Live. Spotlight.

A live, socially-distanced outdoor evening of dance, food, drink, and auction is offered for MashUp’s annual gala. The event benefits the ensemble’s upcoming dance film in honor of National Women’s Equality Day. BIPOC choreographers are being commissioned to develop works for the film that explore the intersection of feminism and race. Frogtown Creative Studios, 2934 Gilroy St., Frogtown; Sat., May 22, 6 p.m., $100 per guest. Info and tickets at MashUp. 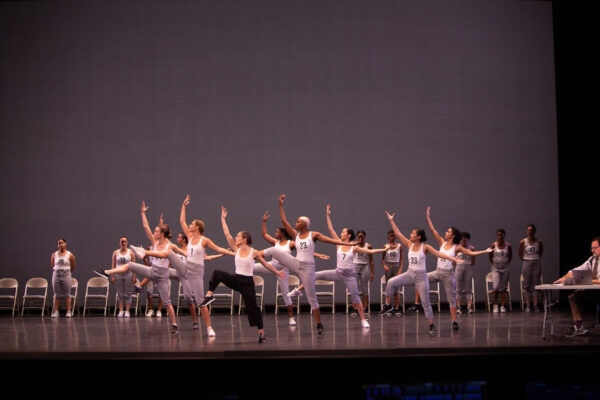