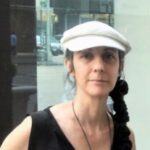 IN THE BRONX THEY SAY

And in the Bronx they say

An athlete lines up bottle caps at the bottom of the
steps, picks one up, runs it to the top,
then over again times fifty

A CIGARETTE BUTT ON A LANDING

Pick it up, toss it in the trash, pretty up city stairs for an annual trek.

taking his last drag as he climbed down to the factory gate.

Now trekkers climb a yellow-brick road for views, for snapshots, for exercise,

for a lighter carbon foot when the bottom of his steel toe boots was black, his sole heavy.

to church and school, to a haircut and soda pop. And to a steel worker, steps were the route

to punch in and out, the route he didn’t want to take except on payday.

On my grandfather’s last night shift operating a crane before he retired,

my father and his brothers borrowed a Cadillac and drove him home at sunrise.

in a sweat cabin above open fire. He came home to a pancake breakfast,

Corso is the name my father gave me, the name I keep, the name engraved on the Immigrant Wall of Honor.
We board the ferry to find his name. Mario Procopio Corso, a Calabrian farmer’s son who flunks a grade of school after he emigrates to this country, who one day shows his teachers he can spell and write his name when he finishes high school, works in a steel mill, attends college on the G.I. Bill, becomes the school’s business administrator signing their paychecks.

My father’s course begins with a boat ride to Ellis Island— not like this one. My grandmother and Aunt Grace, like others in steerage, are sick to their stomachs and eager to see Lady Liberty in New York’s harbor to mark the end of an agonizing journey across the ocean, while a sailor takes a shine to my father, puts his naval cap on his little head, perches him on his shoulders. Already my father finds his way.

I say to my sons: Sono Corso. Siete Corso. Siamo Corso. We are the course, the main street, the boulevard, the parade that passes by. We are New Yorkers, and I will boat you to the Statue of Liberty and you will land. You’ll trace the letters of our name, curved and circular, winding like a hairpin turn on the road to your grandfather’s hill town.

The C, the O, the R, the S, and O. Your course rests on your fingertips. Someday you’ll know who you are and what direction to take. Live your life. Live your name.

View Author Archive
Paola Corso, a New York Foundation for the Arts Poetry Fellow and Sherwood Anderson Fiction Award Winner, is the author of eight books of poetry and fiction set in her native Pittsburgh where her Southern Italian immigrant family worked in steel mills. Her recent books include Vertical Bridges: Poems and Photographs of City Steps, exploring her family’s ethnicity and working-class background; The Laundress Catches Her Breath, winner of the Tillie Olsen Award in Creative Writing; Catina’s Haircut: A Novel in Stories, and Once I Was Told the Air Was Not for Breathing, a 2018 Triangle Fire Memorial Association Awardee invited to read her poetry about garment and steel workers in universities across the country. Her writing has appeared in The New York Times, Christian Science Monitor, Women's Review of Books, and numerous journals. A literary activist, Corso is co-founder of Steppin Stanzas, a grant-awarded poetry and art project celebrating city steps and the early immigrants who built them. She is proud to be included on the Pennsylvania Center for the Book’s Literary and Cultural Map. Corso splits her time between New York City and Pittsburgh. www.paolacorso.com.