Pass Over Is a Powerful Gut-Punch

The first Broadway show to open since the pandemic shutdown of March 2020 is appropriately a blast of fresh air for the naughty, bawdy Great Bright Way. After productions in Chicago in 2017 and at Lincoln Center’s Off-Broadway Clara Tow Theatre in 2018, Antoinette Chinonye Nwandu’s Pass Over arrives freighted with history and portend, heralding a new moment in commercial New York theater. Since the COVID crisis and the racial reckoning America has undergone, Nwandu’s powerful allegory on what it means to be young and black in this country has taken on new significance and explores what we’ve gone through, though it was written before the killing of George Floyd and the subsequent protests for racial justice. (Nwandu has made some scripts revisions since the last staging.) 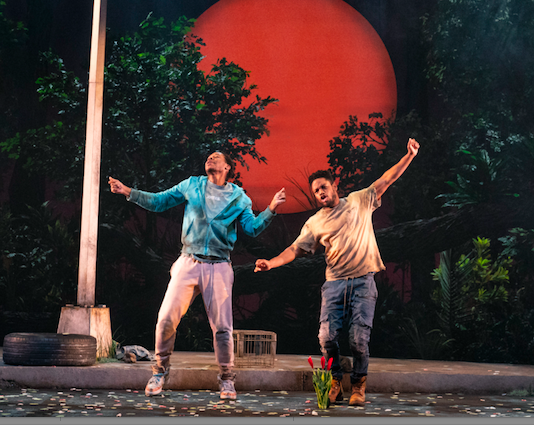 The play is a contemporary take on Waiting for Godot, only instead of Beckett’s bedraggled clowns Estrogen and Vladimir stuck in a desert landscape eternally anticipating a possible employer who never shows, we have Moses and Kitch, two rootless young men swaggering and telling each other they will one day escape the urban no man’s land they call home. Beckett’s carrot, over which his characters debate about eating, becomes a stale pizza crust and the unseen menaces of Godot who beat Gogo and Didi are now the hostile white police (or the “po-po”). There are also allusions to the Book of Exodus, fairy tales, musical comedies and pop culture (the theme from The Jeffersons is ironically employed), all blended together in Nwandu’s lethally funny and sad cocktail of a cautionary tale.

The playwright intensely examines the precarious state of too many black men in America, who are trapped by lack of opportunity and indiscriminate police shooting. Much of the early dialogue involves the two protagonists spinning dreams of wealth and fame with no concrete plans on achieving either. Nwandu skillfully plays with street jargon and director Danya Taymor stages their interactions like a harrowingly bleak circus act. Periodically, Marcus Doshi’s harsh lighting will shift into a frightening nightmare and Moses and Kitch will check their bodies for bullet wounds. Hysterical comedy alternates with soul-numbing tragedy. The protagonists may be teasing each other over an imaginary joint one minute, then trying to recount all of their friends who have been killed by the po-po.

Into this slapstick tragedy (to borrow a phrase from Tennessee Williams), walks a seemingly clueless white character, referred to in the program as “Mister.” He claims a lack of racism and like the pompous Pozzo in Godot, lays out a sumptuous picnic. He invites the starving Moses and Kitch to partake. What follows is a scathing indictment of racial inequity, finally leading to an idealistic, yet ambiguous climax. Without revealing too much, Doshi’s lighting and Wilson Chin’s set design contribute significantly to a bizarre and stunning theatrical transformation. Safari Bush’s costumes capture the realistic street culture and metaphoric elements.

Jon Michael Hill as Moses and Namir Smallwood play off each other brilliantly, strutting with macho bravado to conceal the raw terror they feel for the white establishment. They handle Nwandu’s verbal ping pong balls like expert jugglers. Gabriel Ebert also displays precise timing and characterization as the mysterious symbol of white privilege and oppression. All three ably meet the demands of the absurdist script, transitioning from naturalism to fantasy with dexterity and giving each equal weight, as does Taymor’s direction.

Pass Over raises several difficult issues and addresses them with humor, pathos, and ingenuity. It doesn’t include every aspect of a complex issue—the impact of police violence and lack of upward mobility in communities of color. But this is not a documentary or a news report. It expresses a point of view in artistic terms and raises more questions than it answers. That is what theater is supposed to do and maybe in the post-shutdown era, Broadway can present more plays like it. 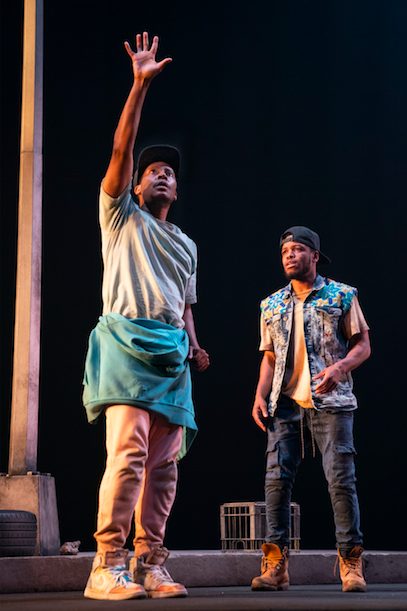 Tags:
Previous Article
5 Ways to Hurricane Proof A Home
Next Article
My Choice #3