This story is not a ripped out page of a traveler’s diary. One of those little leather numbers from Barnes & Noble before Amazon ate it for lunch. Leather seems to signify importance. This is a story without paper, without leather, without a phone, without money—a story like a mushroom cloud that harms no one and disappears. Personal stories about travel are fucking boring anyway. It’s like reading a recipe online and all you want to know is how much flour to use but you have to hear this long, terrible story about how Karen spent her whole day beforehand, and how her mother made this pineapple upside-down cake in summers on Lake Ontario or some shit. With travel stories, I just want to know where to go. What bus to take, and that’s it. I don’t need to hear about Machu Picchu, bro.

But this is a story about nature and magic. 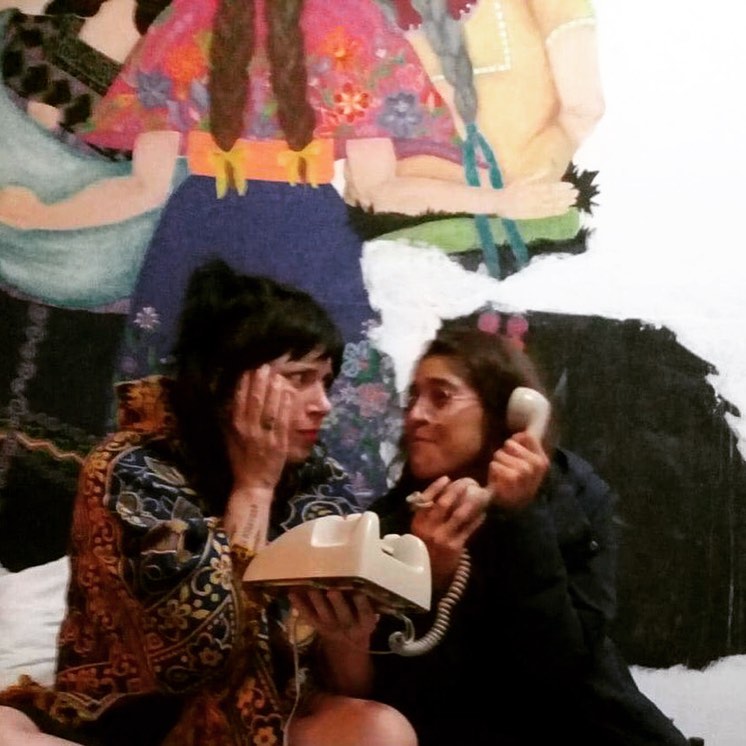 When I arrived in Mexico City to do a writer’s residency with my MFA program, I was “kicked out” for mysterious reasons that were never really explained. Something about my behavior. I’m sassy and it gets me into trouble. Very suddenly my scholarship was taken away from me the DAY classes started, along with all student loans. I found myself in one of the toughest cities on earth without a penny. One of these wretched, unfathomable days, I got totally lost in a terrifying part of town. Every man in the street was drunk. Poor, finished children covered in sweat, dirt and polished despair like ivory—a failed chess piece, well-hidden in their hearts. Or perhaps a keepsake from their better days? A key to their bedroom, a word from their mother, or the smell of pozole. Despite their possible hidden treasures, I have never been more scared in my adult life. A small woman. Lost, alone, no Google Maps.Taxis and motorcycles tearing the atmosphere into ribbons, leaving black hell-clouds behind them whose lives are very short-lived on earth; but alas—they float and become trapped in the canopy that is permanently strapped over the city with ropes and cables over a dark circus. In a valley surrounded by volcanoes, the sun doesn’t even try to squeak through. I found a hotel deep in downtown, carrying all of my things like a ding-dong; an expensive guitar and four heavy bags. When I arrived I was shaking and trying not to cry. The owner of the hotel was the kindest woman I think I’ve ever met. Her name was Laura, the name of my mother. She was blind in one eye. She told me I could take a shower, put my things down and rest and didn’t have to pay anything until I could walk again. Each day I could only afford one Cup of Noodle I ate by myself on a concrete floor in front a window covered in metal bars. I was happy as hell to eat this stuff. I read Catcher in the Rye (again) and laughed at Holden’s bad attitude. What a brat. What an innocent little punk.

I’ve traveled for 15 years and have been in some doozies. Like that good ole’ time protestors somehow knocked over an entire semi-truck and set it on fire on the Pan-American highway so our bus from Cusco, Peru to Lima could not continue. We were told we couldn’t leave the bus, even just to breathe, because there were pirates in the desert. I am very claustrophobic, so I practically had to smash my body through the bus door, walked all the way to Lima, giving my only bottle of water to a baby. Protestors threw huge rocks at me but they hurtled past my head until I simply went up to them and said, “I’m sorry about your farms. It’s not fair to you. But I am not from here and have nothing to do with it. I mean no harm to you my friends. Please—I am only passing through.” They silently said yes: pass. I hitched a ride on the back of a farmer’s truck smashed between a goat, bags of herbs, flowers, rice and one huge pig. It was hilarious to me then, and still is.

I never saw anything of the city. I couldn’t afford a trip to Frida Khalo’s famous Casa Azul. Oh well. It’s just a house, right? After being ripped off by a hotel called Selina (they kept stealing money from my father’s credit card each day without our knowledge), I’d had enough. I, too, was hopeless. Not polished with despair—not yet. More like covered in bruises and out of ideas. A man chased my girlfriend from the Netherlands in the night and I had no idea what to do, except having an instinct to NOT RUN. I don’t run from anything. Even if I met a cougar I really believe I would sit on the ground and do nothing but show him or her my heart somehow. In this case, I decided to run TOWARD him as fast as I could. I knew it would throw him off—the last thing he would expect a woman to do. The rest of the details are ugly, and I am a romantic. Ugly words and images hurt me. So I’ll just let you know that I won, and we got away. My friend was not hurt at all. I didn’t fair as well, but that’s to be expected when you run after a crazy man.

With the help of super homies, I got on a bus to San Cristobal de Las Casas high up in the dense, mountainous forest in the Chiapas where I became best friends with two young men. Without any money, there was nothing to do but hang out in the woods. High up on a hill was a beautiful church that looked like a castle. I kept saying Dracula lived there and I wanted to meet him, shake his bony hand, clutch his long fingernails. Why Not? But the altitude was so high that air was too thin (and let’s face it: I’m very “out of shape”) so I never made it to Dracula’s house.

Instead: we lay on the soft bed of the forest like the Lost Boys in Neverland; no blankets, no money, no mothers. We played a game I just made up that makes almost no sense. We played it in Spanish: “Who would win in a fight? Jason, Michael Myers, Freddy, JAWS, the girl from the Exorcist or Chucky? And you need to explain WHY they would win.” Then everyone would have to vote on whose explanation made the most sense.

I was the only “American” and it was actually hard for me to defend my character in the fight. Michael Myers is human and can be killed. Jason is a supernatural being who seemingly cannot be killed. Freddy is a bitch ass ho that can kill you in any dream AND in reality. JAWS could kill anything, but you’d have to be in HIS territory.

Unbelievably—the youngest of the Lost Boys kept expertly defending why freaking Chucky—of all the dipshit horror movie characters—Chucky would win Every. Single. Time. His excuse: Chucky is a doll; he’s not real and cannot be killed. He feels no pain, and is an evil spirit trapped in his plastic container. He is viciously evil with no soul, whereas Micheal Myers and Jason are both traumatized or mentally ill; therefore, they are vulnerable. If you bring up Jason’s mom he gets PISSED. Chucky doesn’t have a mother.

I could not argue it down.

The boy who kept winning is a “Chilango”—a resident of Mexico City. They are easily—no contest—the toughest people I’ve ever met in my whole life. They have ridiculously funny slang words and say brutal things to each other constantly. He kept saying things really loudly, like “PINCHE JAWS!” and “PENDEJO JASON!!” which is one of the funniest things I’ve ever heard someone say.

After laughing our asses off, rolling around in dirt, we noticed three forest-dogs surrounding us, their golden eyes glowing like wandering flashlights. I swear to you: I could feel they were our protectors from some God-Dog in the sky. It was very late in the woods…perhaps they could feel danger approaching? They surrounded me the most. The two male dogs stood like Roman statues, scanning the darkness—totally stoic. The female dog had a limp, so she laid her head in my lap. We named the dogs Chucky, Freddy and Negrito—the black male dog who was clearly the king. Lying on all the pine needles with our heads in our palms, arms up, legs apart like camping in Stand By Me; but without cigarettes or hotdogs or dead bodies (that we knew of, anyway). 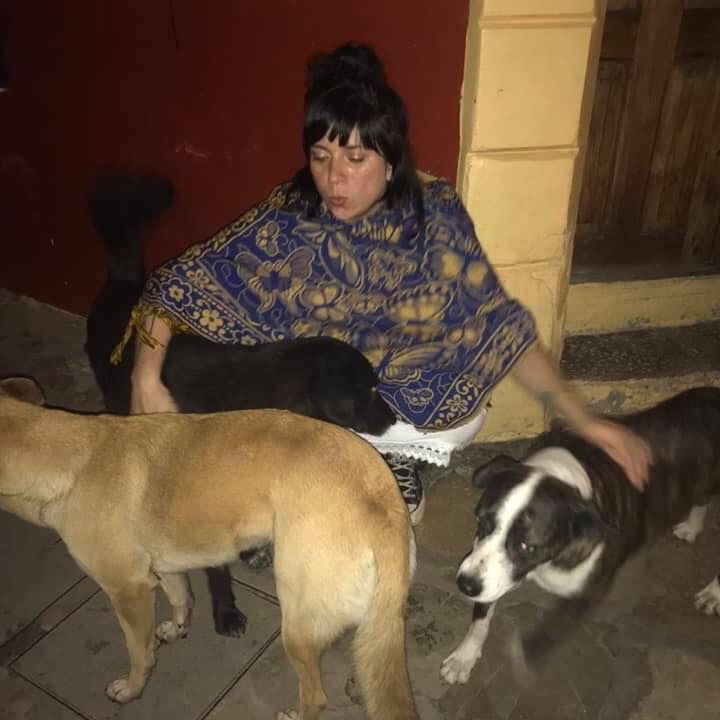 Somehow it was so beautiful, tears were streaming down my dirty face. The youngest boy said “Look, Lola, look!” (They all call me Lola here.) Lightning Bugs. Shining on and off, the warmest, amber glow, close enough to touch. I am from Iowa and have not seen a single lightning bug since I was a child. Not a single one. They encircled us like a slow-moving, ambling constellation. A constellation that could feel love and produce love and make promises of love. Messengers. The gang of dogs walked me all the way home and didn’t ask for anything from us. When I got to our front door, they all hugged me, shoved their heads against my legs, whimpered a little, then promptly left.

Some demons are following me, and angels are following them. Fairies encircle me in the forest, starving dogs protect me. Why? I’ll never really know. What am I supposed to do with these stories, this life? I will follow tiny, amber lights. I will trust animals. I will let go, let go, and let go even more—until there’s nothing left but soft earth beneath me and a few tender hearts that glow under boys’ t-shirts. I will love this world until it’s curtains. And when that velvet fabric swings to a close, I will bow, then dream, and remember.