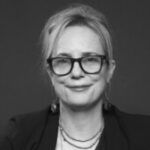 ~ for Dorianne
And a rush of halogen feathers flies out
from the moon’s busted pillow,
I stand at the edge, Mother
and the pasture glowing
between us, a stubbled crater
stabbed with bells
and icy nettles, once again,
begins to melt. A flock
of seagulls firing up
the red horizon
makes our horse much more distinct,
stomping around her bold
perimeter, dark as desire. She lifts
a single delicate ankle
so I won’t recognize the danger,
her language tucked
like diamond rooks
in the shadow of each hoof. She’s come
a long way to find me,
the night’s glass staircase
ground down
with rhythmic tramping,
a quarry of stars
she’s jacked over, rocks glittered,
the lunatic truth
and clashing call
of all those clapping, insomniac
girls you fought
and girls you taught
to make the message clear:
Every poem’s a love poem
no matter how weary the world.
***

~ sculpture, Greek, 325-300 BCE
Three tons of porous marble flown high
over continents on Getty purse strings
after two thousand years parked in Rome.
Stallions mauled by noble beasts
in Hellenistic worlds were sign
of the times: emperors and generals
playing God with the little people.
Here, we walk in circles under domed atrium light,
faint fish aromas whipped in on Malibu sea breezes.
The way that lion’s claws scrape shady
indents in the stallion’s stone side,
you’d think time had stopped forever,
the preyed upon steed stilled
by a sculptor’s lean chisel. We read how
loving mentees of Michelangelo
mended severed heads
with their fine Renaissance hands.
Before that, Circus Maximus lured it home
until stairwells of the Palazzo
made it mise en scene for the fatally sentenced.
Show me an art unstained by blood.
So close to your ear, I whisper:
There’s a poem in here somewhere
and I’ll kill what I have to to get it.
***

The Raised Shade of Morning on the Lower West Side

From what must be the most beautiful view
in New York City, you can watch boats unzip
the long blue bodice of the Hudson,
white boas of churned up feathers dragged
in their frothy wake. Cars rush uptown or downtown,
east to west, but only one way or the other
and you must choose on any given street
unless you are a bird: a sparrow, finch,
seagull, or ordinary pigeon in which case
you can flap and dive and flutter
at whatever height, speed, or aerodynamic
configuration, sail with the wind or against it
if you want to get where you are going.
You are a bird and so above the laws
of ordinary traffic, of ordinary human.
What is human is to have a heart
like a bird that soars and sweeps
and flickers to the extreme awe
and consternation of those left standing
on the dock below, waving their arms
while the tea in their thermoses
turns cold. The audacity of flight.
The fact of the airborne heart,
that gritty, wet red engine revved
and releasing itself from the sky’s bright palm,
weaving around the dim side of ships
and skyscrapers, flower stands and taxi cabs,
the dread-locked silhouette of a man
on the corner filling the acapella air
with a sound lovelier than you could
ever imagine waking up to this morning,
the heart, its bent ears shivering,
the trees in the high park rustling,
their leafy nests and shadowed landings
where the heart, for all its regal
and wildly ecstatic pumping, eventually sleeps.

We are proud to premiere these poems in Cultural Weekly.