For this fiftieth post in the Poets on Craft series, we have James H. Duncan and Rebecca Schumejda. 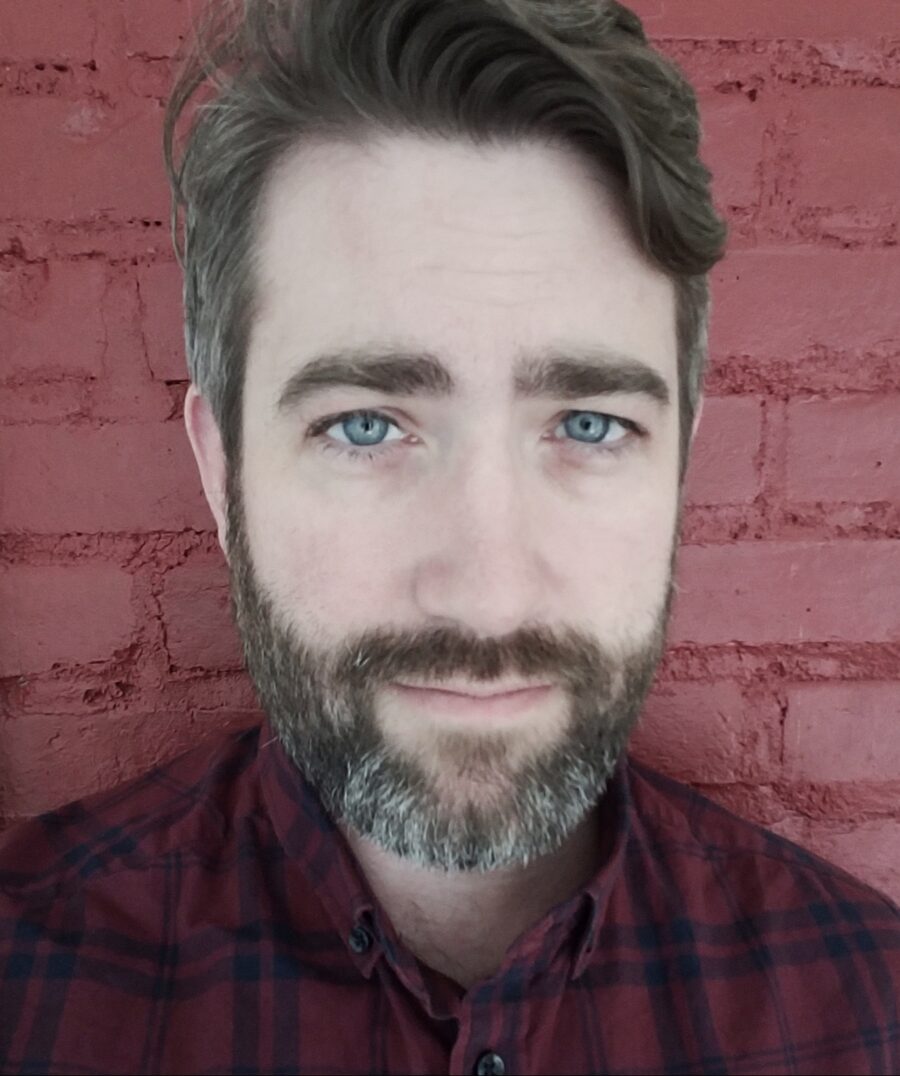 James H. Duncan is the editor of Hobo Camp Review and a former editor with Writer’s Digest, American Artist, and Albany’sTimes Union newspaper. He is the author of We Are All Terminal But This Exit Is Mine, Vacancy, What Lies In Wait, and other collections of poetry and fiction. James resides in upstate New York but travels frequently to review independent bookstores for his blog, The Bookshop Hunter.

As a young writer, I believed short stories were the perfect way to share our human experiences. I wrote many (bad) stories back then, but it was only after a series of personal tragedies that I took up poetry and discovered it was an even more refined and fluid form of communication. But I never lost that love for telling a story in any piece of writing.

I don’t think it’s too controversial to say that poems should mean something, and that readers shouldn’t need advanced degrees to find that meaning. Yet I can’t tell you how many times I’ve reached the end of a poem and thought, “…and?” You don’t need to beat the reader over the head with a beginning-middle-end type of story, but the poems I’ve admired most (and as a poetry editor, have sought to publish) have conveyed meaning using a personal narrative in a concise and unique way, and I try to do the same in my own work.

When I sit down to write, I first mine my past experiences for key images or moments that stuck. Maybe it was a phone box in Los Angeles, the way the Madison Theater marquee shimmers at night, or the peaceful sound of rain falling on my father’s patio. My first few lines try to ground that image or idea on the page as a placeholder.

From there, I pause and ask myself, what is it I want to say? And what story am I going to use to say it? Maybe I want the cyclical marquee lights spiraling into the night to symbolize my hours and days slipping away. I jot that down and think about constructing the poem around all the nights I have spent in the theater and how they’re like the lights outside, here one moment and gone the next, repeating until the bulbs burn out.

But while I have an idea to build upon, I want to use the act of going to a film as the vehicle, a narrative that gets me from just talking about the idea to walking up the street, looking at the ever-changing movie posters, buying a ticket, popcorn, and settling into a seat surrounded by faux theater curtains on the walls. I observe couples whispering, someone on a phone, and then the film begins. What other films have I seen? Which ones stuck and contribute to the theme of time slipping away?

The poem might seem like someone just going to a movie, but there are many ways to layer the poem to ensure my meaning is sewn throughout. Maybe I’ll alternate stanzas, talking about the experience of seeing a film in one and more abstract and conceptual ideas of life and death in the next. Maybe I’ll tie these two together in the final lines about leaving the theater and seeing those lights all go out at once, as I did one night this summer.

I’ll take a few passes through, adding smaller metaphors, considering flow and word choice, line breaks and stanzas, etc. Even after I’m “finished,” I ask, did the meaning come through? Is the story emphasizing the greater idea? And finally, does the poem flow correctly?

After meaning (using story as a conveyance), the most important thing to me is flow. More than form or structure, I want to make sure the way the poem is read aloud (and read in the mind) is as smooth as I can make it. Reading it aloud is the best way to judge this. Even better, read it in front of others. You’d be surprised what elements or mistakes your panicked brain will latch on to when thirty people are staring at you, following along.

And that’s the real trick, getting them to follow along. Writing poetry may be a personal act but sharing your poem’s meaning effectively depends on you building a bridge between writer and reader. If you construct it well, the reader will walk along with you to the end, and hopefully the message will come through. That connection, to me, is the most satisfying part of poetry, and storytelling has always been the bridge I’ve used to get there. 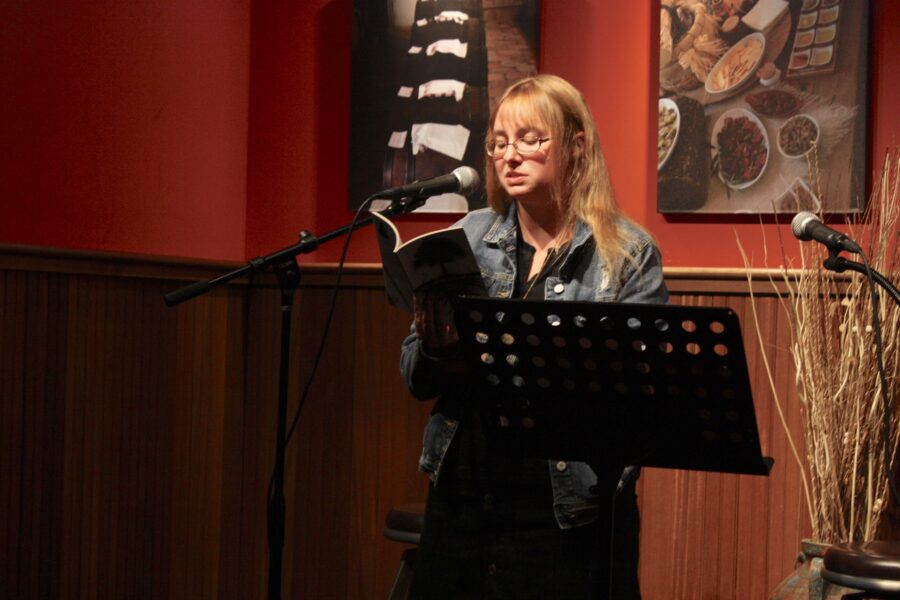 When I was studying at the State University of New York at New Paltz, Anthony Robinson, a novelist and short-story writer was the director of the creative writing program and taught most of the workshops. On the very first day of class, he told us that he would not accept poetry because college students are incapable of writing about anything besides getting wasted at frat parties and he didn’t want to read one more poem on that subject. His refusal to allow poems was the catalyst that helped me to develop my narrative style. I would write stories for his class and then turn those stories into poems. After I got accepted in the master’s program at San Francisco State University, through coercion from another Professor and by then my mentor, Pauline Uchmanowicz, Professor Robinson allowed me to submit poetry in the last workshop I took with him. The first poem I submitted was about getting drunk at a frat party; it was, of course, a prank poem.

To this day, I often draft out a story then deconstruct that story into a poem or series of poems. I often take a marker and circle or cross out portions of the story and find the poem hidden inside. I also move lines or sections all around the page and even combine parts of two or more poems during the process. Generally, when I am working on poems, I am thinking of the poem as part of a collection. My books are always thematic and usually have an overarching story. Envisioning the larger body helps guide me. Most of my early work centered around place–home, a pool hall, a diner, or a working-class neighborhood. My more recent work seems to take place in a more psychological setting, but the poems still have narrative qualities. Currently, I am writing about loss and the transformation of loss. Yes, I am struggling with this new approach because I am entering new territory, but I have always believed that being too comfortable in life or in writing is dangerous because being too comfortable gives us a false sense of security.

Endings are the most challenging part of the process. I have found over the years, through the help of friends, that my last line is always already hidden in the poem itself, as I tend to over-explain at the end. My friends, John and Dan, who are also poets, help me with this. I have gotten a little better at finding that last line myself, but I still struggle. Maybe it is because the ending of the poem shouldn’t be an ending at all, but really the beginning.