For this twenty-second post in the series, we have Stephen Kampa and Chelsea Woodard. 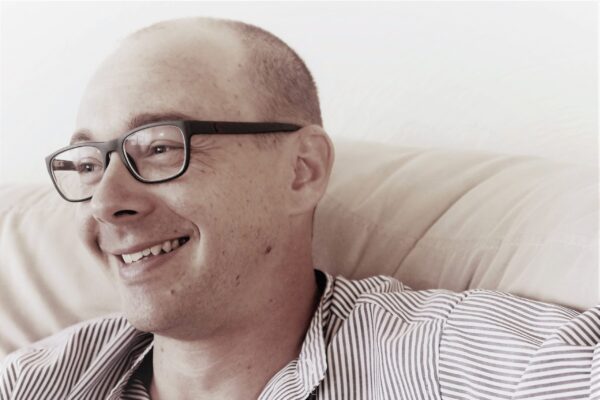 Stephen Kampa is the author of three books: Cracks in the Invisible, Bachelor Pad, and Articulate as Rain. He teaches at Flagler College and works, from time to time, as a musician. He can be found online at www.stephenkampa.com.

Poems begin in alertness. I wish to bring from that word not so much its military meaning as its etymology: it comes from being on watch, à l’erte, “on the height” of the watchtower. Poems begin with the bird’s-eye view of being in the world but also creaking slightly above it, seeing a little further out or from an unusual perspective, participating but also observing. Poems begin when one is alert to the possibility that a word, phrase, or image might be intelligible in more than one way, as when I noticed a local coffeeshop’s sign that read, “Let us capture your moment!” This suggested its own military metaphor: there was my moment surrounded, bound, interrogated for whatever intelligence it could provide. Will that become a poem? I don’t know yet. The important thing was to be alert to the possibility that it could. Being a poet means being regularly and readily on the alert for the double-tongued world since poems can come from anywhere. We apprehend them by way of curiosity, through our capacity to sense in the familiar some mineral hint of the strange. Poems come from being interested in the world, the otherworldly, the unworldly.

This habit of alertness precedes any practical craft matters. This is why the most direct response to the question “How do you start a poem?” is, You start by paying attention. Only after that can craft have something to craft. In terms of nuts and bolts, I find that poems can begin anywhere—beginning, middle, or end (although I find first and last lines are the most likely to drop from the sky)—and can proceed in any number of ways. I would identify two basic, central models: The Line-at-a-Time and The Spill. The Line-at-a-Time model suggests itself when a poem will be formally complex or tonally propelled: one botched line in an elaborate rhyming stanza can unravel all the stitchery that follows, one tonal kerplunk can ruin the whole groove. The Spill model suggests itself when a poem will best reveal itself through rapid, intuitive improvisation and exploration (even if, ultimately, that same poem might have to be revised using The Line-at-a-Time). Even to identify two basic working models, however, is to ignore poems that require, as part of their processes, stanza-by-stanza outlines or Jonsonian prose statements or wordlists or little musical motifs. Basically, I don’t think there’s a single way to move through a poem line by line. Instead, I would give a single piece of advice: keep listening.

When it comes to endings, which have attracted a host of bonified bon mots from poets who want to pin down with wit the livingly elusive completion of a poem, I find myself thinking of Richard Wilbur, who writes of the gratitude one feels for having gotten something “decently said,” and of Stanley Moss, who used to lean back in rapture and say, when he approved of a line, “And it’s true.” Those seem to me good touchstones: has it been decently said? Is it true? To their wise words, I would add just one more question: does the last line ring and keep on ringing? Chelsea Woodard is the author of the collections Vellum (Able Muse Press, 2014) and Solitary Bee (Measure Press, 2016). Her poems have appeared in The Threepenny Review, 32 Poems, Birmingham Poetry Review, Blackbird, and elsewhere. She is the recipient of a Walter E. Dakin Fellowship from the Sewanee Writers’ Conference and teaches at Phillips Exeter Academy in New Hampshire.

For me, a poem starts with something that strikes me and stays––like the time a few years ago when my pet bird flew against the large bay window in our house, not seeing it, and left a dander print of her feathers on the glass. We left her shape there––in part to avoid it happening again, and in part because it was beautiful, and strange––very eerie. I ended up writing a poem based on that image. Sometimes poems start with an image, a word whose etymology I discover by accident, or the true name for something that I didn’t know about before and that seems rich with metaphor (like the fact that cows and goats belong to a suborder of mammals called “ruminants,” or that a person who reassembles skeletons for museums is called an “articulator”––wow!). Sometimes it’s a moving story I hear in which worlds of seemingly unrelated things merge, like a family friend/finance professor describing how he helped a student improve her credit so that she could get gender affirming surgery. I am often drawn to myth, artists and artistic processes, and to anomalies or historical figures who were anomalies. I grew up on a hill in the middle of the woods, where wild and domestic animals, plant species, and shifting ecological systems were very much a part of my consciousness and daily life, and these are still things I pay close attention to. Sometimes a poem starts with a random and specific branch of knowledge––mycology, lepidoptery, hagiography, and so forth.

After the initial idea, if I can’t work on the poem then (which is often the case: I tend to get ideas when I’m moving––driving, walking, hiking), I write them in a notebook, or in the notes section of my phone for later. Sometimes the poem determines its own shape, and I know it needs to have long wrapping lines, or short rhyming couplets. Sometimes I have a repetitive or nagging line or concept, and it seems to want a certain kind of container, like a sestina or villanelle. I find the structure of a sonnet really helpful when I’m working through a problem or trying to understand something through a poem. I think Frost’s line about writing free verse as “playing tennis without a net” is sometimes true for me and having the tension or constraints of form is actually freeing, even energizing. I tend to write in a tetrameter or pentameter line naturally, so try to challenge that sometimes and push myself somewhere new. A classmate in my M.F.A. program said once that a poetic line is a unit of sound as well as a unit of meaning––I love this observation, and always try to have my lines be sonically rich and resonant in their end-words and stand-alone quality.

For me, the end of a poem is always the hardest part, and of course, the most important––if you don’t get it right, the poem might fall flat, or not resolve itself. I often finish an initial draft of a poem in one sitting, but then have to return and ruminate on the ending for a few days, trying different things, looking at the poem from a new angle. I love the final lines that arrive with certainty, like a perfect stitch or sharp arrow. These happen sometimes and are wonderful gifts, but they are rarer for me. Form can help with this. Even if I’m deciding to break out of a form, and leave a hanging line, or stop a sonnet one line short––those choices help me see where the poem wants to go, and how those endings mean in terms of what has come before. Often, the rhythm of the words themselves help, like I know I need a two-syllable verb, or I know I need a clean, monosyllabic noun, or I know I need to break the meter altogether. If I am stuck, reading other poets, especially poets whose style or voice is really different than mine, can be fruitful. It helps to see through new eyes.