Review: NYC from the Inside, Collected and Edited by George Wallace

A poetry anthology of New York City by New York City poets is about as ambitious a project as one could take on. The city is filled with exceptional poets who love and write about their hometown. NYC from the Inside is filled with their work and delivers a view into how those who live there understand it. It does not attempt to capture the city comprehensively. Instead, what this anthology delivers is how these writers understand it in this moment, under these conditions, and how it can and should be framed and reframed. It is a collection that delivers because the editing is sensitive, and New York is a city of great writers

There is no way to define what this collection is because the poets all follow their own trains of thought of course, but there are some trends that help to define it. So many poets write about the city not as a physical space but as a state of mind and being. In Pamela Laskin’s “Overgrown Garden: a Love Letter to New York” for example, Laskin describes the trash and difficulty of living in the city for a few stanzas, but she ends with this:

your frantic air is stifling
yet you pull me into this frenzy
of taste and smell and color;
how could I ever leave you?

Even the daffodil
loves to linger
in your overgrown garden.

This love of place permeates the collection. Of course, how could it not, but the poets love it despite and even because of its flaws. The cramped indifference is a part of that. Rather than avoiding the problems, these poets expose it, such as in Martin Espada’s prose poem “The Stoplight at the Corner where Somebody Had to Die,” which discusses the city’s policy of not putting in stop lights until someone’s death proved that it was necessary.

They won’t put a stoplight on that corner till somebody dies, my father would say. Somebody has to die. And my mother would always repeat: Somebody has to die. One morning, I saw a boy from school face down in the street, there on the corner where somebody had to die. I saw the blood streaming from his head, turning the black asphalt blacker. He heard the bells from the ice cream truck and ran across the street, somebody in the crowd said. The guy in the car never saw him. And somebody in the crowd said: Yeah. The guy never saw him. (62)

These poems are emblematic of the work. The collection captures the casual violence and indifference of a place so stuffed with people that the indifference must exist if its residents are going to maintain sanity.

What makes the collection special to me is that it is current. New York must have changed in the last two years as a reaction to the nation’s politics and to COVID. Edward Hirsch captures the anxiety that is special to our time in his “Eight People”:

Eight people died
on my block in Brooklyn
last week
. . .
which was otherwise
so calm and quiet
that I wondered
if God, too,
had gone into hiding
and sheltered in place.

COVID and the sense of isolation that we all have felt seems intensified in Hirsch’s city that was once bustling and noisy and is now quieted. If New York seemed indifferent to death in normal times, that sense only seems to intensified here. And the racism and class consciousness that characterize so much of America has been intensified as well, and that feeling too is captured by its poets especially by John Yau in “Letter to My Friends”:

This intensification of Asia hate brought on by the 45th president is a part of the new normal that people in New York and of course elsewhere feel, and poets like Yau capture well the changing anxiety and danger of this place.

In his introduction, George Wallace states that the collection does not claim to be a comprehensive look at New York. No book could ever be of course. No book could capture the number of extraordinary poets who live in the city either. However, this book helps me, who is not a New Yorker, to get a vision of how that place is changing and what it is. I cannot imagine how powerfully it would affect a resident. 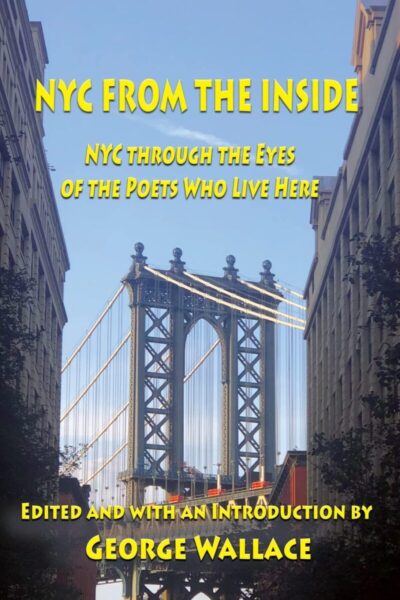 Purchase NYC FROM THE INSIDE, edited by George Wallace