Kari Gunter-Seymour dedicates her collection of poetry, A Place So Deep Inside America It Can’t Be Seen (Sheila Na Gig, 2020), to “every woman in my life who has befriended, loved and looked after me.” This dedication prepares us for poetry that goes beyond the strictly personal to the regional, evoking the lives of women in rural Appalachia over the past hundred years, and perhaps beyond. Gunter-Seymour examines a timeless patchwork of folk knowledge passed down primarily by women that has sustained these people and ties them to their place. In an America that has turned away from agriculture, the regional and local have been rejected in favor of multinational conglomerates, from family farms to agribusiness, from the personal to the corporate. We can see why the lives of these women remain invisible to most Americans, even to those who still inhabit the region, having been little studied or discussed as outmoded and irrelevant. Indeed, the poet opines, these women’s silence speaks most loudly about who they are. In these poems, Gunter-Seymour examines the ethic that both silenced these women and made them the backbones of their communities. 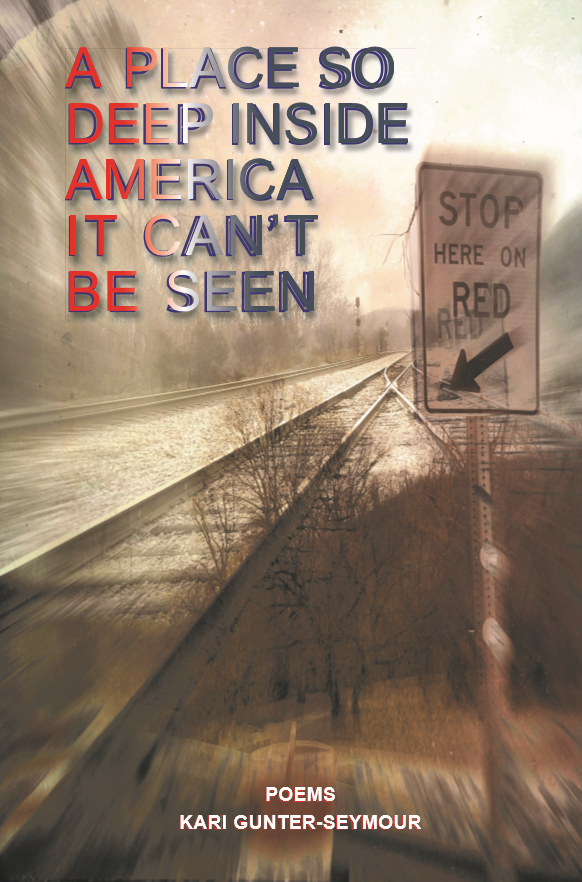 A Place So Deep Inside America It Can’t Be Seen, by Kari Gunter-Seymour

The core of this folk knowledge resides in the archetypical “Granny Woman,” who “dances/under breeze-shivering branches,/her skirts a waltz of wings,/mouth full of stories” (“Last Night The Chime of Tree Frogs,”32). It is she who reads the signs of stars and earth, knows when to plant and when to harvest. She nurtures all creatures, “will cradle you,/deliver you,/ from one mud to the next” (“Last Night the Chime of Tree Frogs, 32). Her lore has not been fully passed down to her grandchildren, though the poet herself has taken on the same roles as nurturer and care-giver. Now that we have turned away from the wisdom of the wise woman, the Earth has sickened and the bonds of family have broken. The poet turns back to this ancestral lore to help mend the broken world.

Though the bearers of such knowledge have always possessed great power, they have at the same time been viewed as a threat, and thus, have been silenced. Women have been forced by a patriarchal church and culture “to stay clean and thankful,/mostly invisible” (“Pain Ripened,” 21).  They are victimized, as “poverty, with hot breath/sneaks up from behind, holds [them] down in the barn” (“When You Meet My Mama,” 19), but no one will listen to or believe their complaints, which they must stifle however they may, with alcohol or drugs or a flight into madness.

We hear from a chorus of daughters speaking of their mothers’ pain and their own, the inherited trauma that extends in the current generation to sons as well as daughters, riven by a national and global dysfunction. The women who speak here know only too well the stories of rape and repression. They have heard from their mothers of a world where women were close to slaves, and cultural authorities enforced a system where “many Christian women were taught to read/if for no other reason than the Lord’s word/ could be used to hold [them] back” (“Pack Horse Librarians,” 23).

Yet a significant part of this history has been withheld from the women of our time, tales of rebellious mothers and grandmothers, who, in their youth, fled home during WW II to work in factories, though “only women of disrepute were considered/working women by the Church” (“Pack Horse Librarians,” 23).  In “What Fanny June Remembers About her Mama,” the speaker imagines her mother returning in death to this empowering experience, “her last thinning breaths/as liberating as the seams of perfectly/punched round-head rivets” she produced in the aviation factory she worked in as a young woman (22).

These women’s physical labor as farmers, factory workers, and packsaddle librarians employed by the WPA strengthened their minds and bodies, brought hope and a vision of something beyond the feudalist strictures of the region. It is this lost history that Gunter-Seymour hopes to communicate to the readers of our time, so that they may take their own personal, regional, and national futures into their hands and shape them.

Though this poet speaks here of a region most Americans know little about, the grounding in history these poems offer gives us perspective on our own national woes, and an idea of how we might go about healing them.

Robbi Nester is the author of 4 books of poetry—a chapbook, Balance (White Violet, 2012) and three collections: A Likely Story (Moon Tide, 2014), Other-Wise (Kelsay, 2017), and Narrow Bridge (Main Street Rag, 2019). She also edited two anthologies: The Liberal Media Made Me Do It! (Nine Toes, 2014) and an ekphrastic e-book published as a special issue of Poemeleon Journal, Over the Moon: Birds, Beasts, and Trees—celebrating the photography of Beth Moon. Her poems, reviews, and essays have appeared widely, most recently in Pirene’s Fountain, Tiferet, Lady Liberty, North of Oxford, Rhino, and in the anthologies Unsheathed, Collateral Damage, Poets Facing the Wall, and Is it Hot in Here or is it Just Me? Robbi is an elected member of the Academy of American Poets.