Review of …this just in… by Bill Cushing

“After months of zombie hunts and wangling / the Morton Salt Girl went postal” (“THIS JUST IN”).

I was lazing in my quarantine-induced cocoon when Bill Cushing’s chapbook …this just in… pierced my cone of silence with powerful poetic updates about the outside world. The book is subtitled: “A poetic journal of news stories, fake and otherwise,” and in his introduction, he writes that this book is about “events—real and imagined—in my life that represent the ‘headlines’ of impact to me.” Cushing’s poems are inspiring and important because they deliver a series of urgent wake-up calls about the status of the human race.

The speaker in …this just in… has a compassionate heart that makes him side with the underdog in any number of situations, including war above all, but also poverty, famine, abuse, etc. For example, in “War to End,” he analyzes some people’s misguided “[r]omantic notions of war” and their certainty of “the ‘justice of our cause.’” The speaker insists that the reality of war involves “men hunkered down in others’ blood,” “corpses fed by flesh,” and “[g]hosts of gas-blinded and limbless men.” The anti-war theme continues in “Requiem for the Troops,” which speaks truth about those who march off to war seeking fame and glory and who instead discover “limbless comrades in baskets laid in rows.”

Cushing’s speaker is someone who doesn’t tolerate injustices without speaking out. In his prayer before chowing down on a big Thanksgiving feast, the speaker reminds his guests (and readers) about those who, at that very moment, “congregate / before a bowl of burning crack” (“A Thanksgiving Prayer”). Similarly, in “Niños de la Pobreza Eterna” [“Children of Eternal Poverty”], he advocates for the “abject children” suffering from “barren famine.” And in a brilliant alphabet poem, the speaker analyzes the A.I.D.S. epidemic, concluding:

Anyone
Is vulnerable: to assume safety,
Dependent on hope, is entirely un-
Safe.

Despite the fact that this book’s subject matter is almost always serious, one of the most delightful facets of …this just in… is that the book includes a number of ekphrastic poems; even better, it reproduces a number of the visual works of art involved. By letting the reader see the important images that inspire his ekphrastic poems, Cushing adds another layer of meaning to both the poetry and the visual art.

My favorite among Bill Cushing’s poems inspired by a work of visual art is “Disappeared Dreams,” a poem based on the painting Women in Black by Marianne von Werefkin (1910). Here is the complete ekphrastic poem and accompanying image:

As this place at the foot of the mountains
moves from dark into day,
black-clad women bend under
bone-white bags draped over shoulders.
Stealing people’s dreams along the blue avenue,
these shadow babushkas
grip full sacks in their left hand,
holding our reveries like bales of cotton.
One kneels at the road’s shoulder, having dropped
her duffel, revealing her face
from beneath a sooted cowl
had any vigilant villager been aware.
Another stops, stoops to scoop back
the spilled contents but worries
after the distance lost by the delay
as a trio of doppelgangers
trudges past, bringing their bounty
to the realm of Morpheus
where demons can gather
to dine on our evening’s fantasies. 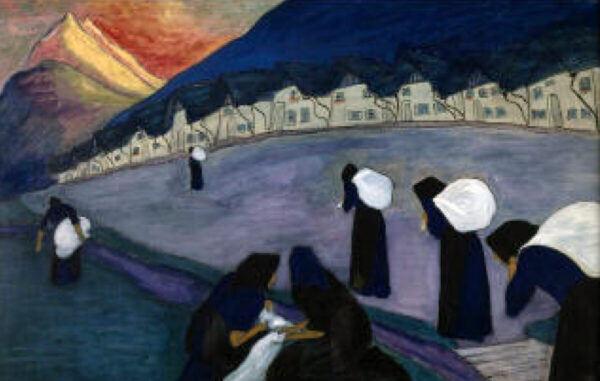 According to the speaker in “Disappeared Dreams,” Women in Black depicts what he calls “shadow babushkas” or “doppelgangers” who steal peoples’ fantasies and dreams, carrying those inner events to the land of demons for the demons to consume. The poem tells us the backstory of the women in the painting, something we can only guess at from viewing the image alone, and the poem’s descriptions of the women are made richer when we see the Marianne von Werefkin painting.

Women in Black reminds me of Escher’s work Relativity, in which faceless, robotic, faintly menacing servants (who could also be described as “doppelgangers”) hoist heavy bags, ascending and descending unreal, confusing stairways. The menacing atmosphere of the picture Women in Black is subtle, but grows in intensity when the poem “Disappeared Dreams” explains and explores the image.

In brief, Bill Cushing’s …this just in…. is about a poet struggling with the sufferings of the world. His mostly short, but meaty poems make me cringe and make me sad; then again, some parts make me laugh (for example, the poems “Movie List” and “THIS JUST IN”).

However, inspired by this poet’s compassion and faced with the poetic truths in …this just in…., I can no longer live in denial of what’s going on in the world outside my bubble. I thank Bill Cushing and the speaker in his poems for that.

It’s what good poetry does.

Link to buy …this just in… by Bill Cushing