The Asian Art Museum of San Francisco has just opened a major expansion of its gallery space, after five years of planning and construction and a year’s delay because of the pandemic. It’s a welcome addition.

The museum, housed in a grand beaux-arts building that used to be the city’s central library, features an outstanding permanent collection on the second and third floors. But for decades it was forced to mount its temporary exhibitions in three small ground-floor galleries. Now it has the 8,500-square Akiko Yamazaki and Jerry Yang Pavilion for that purpose, plus a new rooftop sculpture garden opening this fall and major renovations throughout the building.

The first show in the new pavilion is teamLab: Continuity, a thought-provoking “immersive digital experience” designed by the Tokyo-based art collective teamLab. Visitors enter a labyrinth of dark spaces that display a constantly changing series of computer-generated video projections on the walls and floor (top image), accompanied by a soundtrack of electronic music. 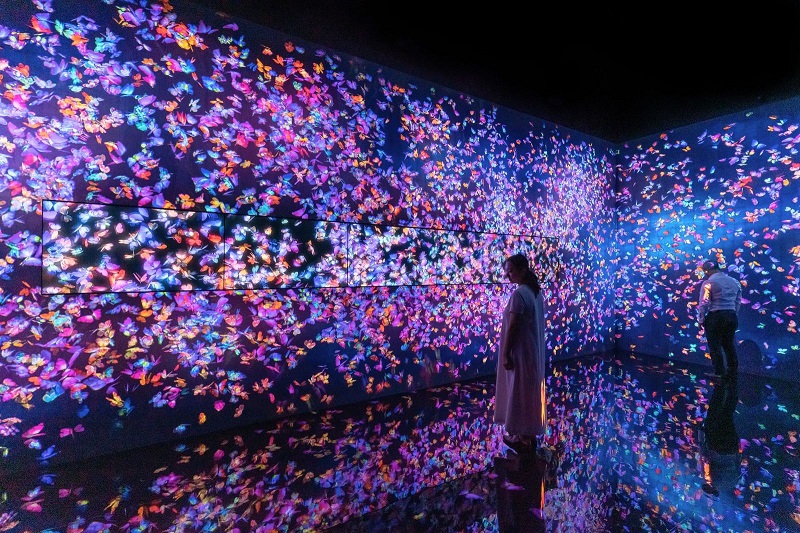 The scenes include animated sunflowers, butterflies, flower petals swirling in the wind, flocks of birds, and schools of fish all moving from room to room and from walls to floor. The video projections are generated by software algorithms that react to visitors in the space and never quite repeat themselves. It’s all apparently designed to encourage meditation, or perhaps just a sense of escape or dislocation. I suspect some visitors will find the experience profound. Others may be baffled or quickly bored.

With several hundred members, teamLab draws on the skills of artists, software programmers, engineers, animators, and others to create their technologically sophisticated works. Yet the video projections also hark back to an earlier generation, specifically the Korean American video artist and sculptor Nam June Paik, currently celebrated in a fine retrospective at the nearby San Francisco Museum of Modern Art.

Paik repurposed film and television clips, as well as TV monitors and found objects, to create his works. They evoked a specific era — the 1960s and 1970s — while teamLab creates an entirely synthetic world for the 2020s, one that seems like a dream or hallucination. Go see the show and decide for yourself.

The museum also has mounted several smaller shows to celebrate its reopening, two in older exhibition spaces and a third in a small, glass-walled section of the new pavilion overlooking Hyde Street. All three feature contemporary works, including more video projections, abstract paintings, and a series of large drawings at the back of the pavilion.

The most challenging of the three, Memento, features a single large work from each of two artists, Jayashree Chakravarty of Kolkata, India, and Lam Tung Pang of Hong Kong. They’re displayed in one of the older exhibition spaces, a long, narrow room now called the Hambrecht Contemporary Gallery. 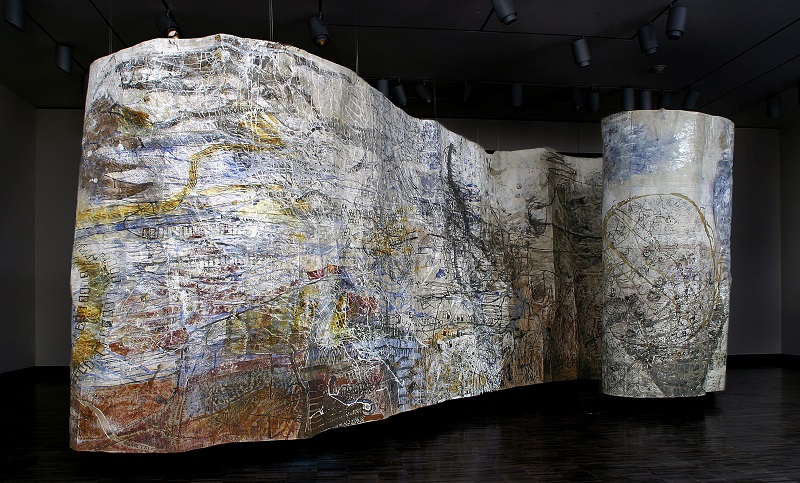 Chakravarty’s Personal Space of 2001 is a gigantic imaginary map of a city created from strips of paper glued together, fully 8 feet tall, 30 feet wide and curved like an unfurling scroll. Built up in thick layers, she inks in street names, landmarks, and other details of her crazily complex city.

Lam’s A Day of Two Suns of 2019 is a video projection with imagery including a bird perched on a tree branch, menacing dark clouds, and shadows of museum visitors. According to the museum, it “captures a changing Hong Kong.” Well, maybe.

Chanel Miller’s I Was, I Am, I Will Be of 2020, installed in the small Wilbur Gallery in the back of the pavilion, is a series of three murals — large line drawings, really — on the subject of healing. Miller was a victim of sexual assault at Stanford University in 2015, a widely publicized incident, and her work is an effort to deal with and move past that experience. 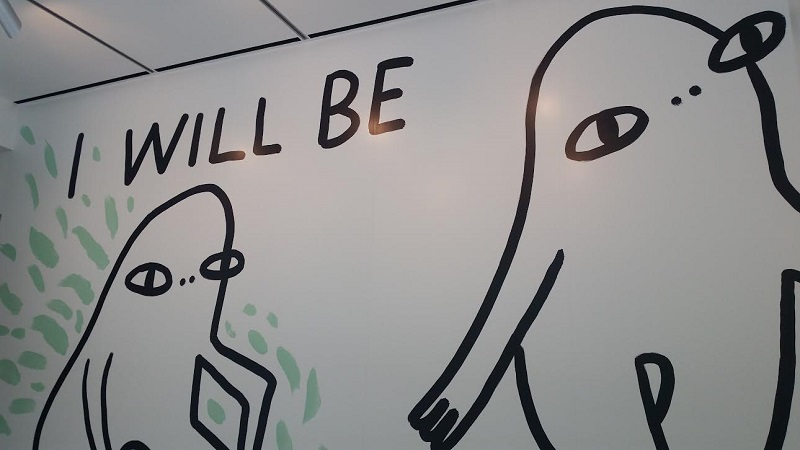 Chanel Miller, I Was, I Am, I Will Be, 2020, detail, Asian Art Museum of San Francisco, photograph by Stephen West.

She’s created a pudgy humanoid character who goes through three phases: lying down in tears and then sitting up and hugging herself (I Was); meditating in the lotus position, with eyes closed (I Am); and then standing up and optimistically moving on (I Will Be). It’s a conceptually strong work, even if the execution is a bit cartoonish.

teamLab: Continuity runs through February 2022 at the Asian Art Museum, 200 Larkin Street, San Francisco. An extensive catalog is published by the museum. Advanced reservations are required.