The horizon line in the feature image, viewed from the shoreline of my natal city, was the outer limit of my world, crisscrossed only by incoming and outgoing ships. 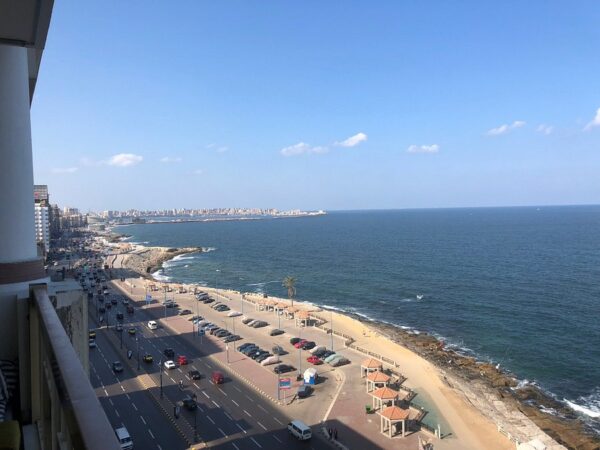 I was awed by that distant presence wondering if one could ever reach it, or if it would recede as one got closer to it.

The day came though, when what mattered was not so much to reach the horizon as to cross the limit of our territorial waters, upon leaving that beloved shoreline, a love grown over seventeen years of walking and biking it.

A love shared by many artists such as Van Gogh and Cezanne who worked in the southern Provence coast for its bright light,  and Seurat who worked the northern Normandy coast for its subtle light … at least in the art work presented here, paired with my pen and ink sketches.

A shoreline, in our sense of the word, is that part of the water’s edge …

… that is made accessible from the land whether in its natural state or in selected laid out places.

Each of these situations is possessed of a particular sense of place which may in turn inspire artists. It is this sense of place expressed in the art works that I have tried to capture in my sketches.

The sequence of the artworks discussed here, is based on the artist’s viewpoint on the shoreline, from the greatest distance to the least.

Cezanne’s view of the Bay of Marseille shoreline …

… is taken from a point of view that includes what appears to be a suburb of the city with a mix of housing and port activity in the foreground, eventually turning into something of a nature preserve across the bay. What interest Cezanne is the strong color contrast between the deep blue water in the bay and the bright mix of orange buildings and their red tile roofs that take about two third of the painting surface. The rest of it is in shades of bluish grey modeling the curves of hillsides under a light blue sky laid in various tones of visible brush strokes. 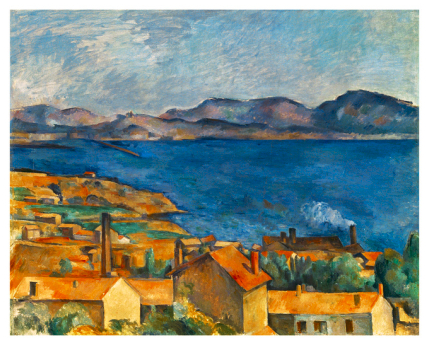 The sense of depth is rendered by the contrast between the bright built foreground, the sea and the background in its natural state, Cézanne having a rather land oriented eye, clearly contrasting the openness of the natural world to the dense and familiar manifestation of human settlement.

To express that orientation, in my pen and ink monochrome sketch of the painting, I have played the solid lightly modelled tone of the bay and the rhythmic modelled tones of the hills, versus the spotty mix of bright tri-tonal colors geometric articulation of buildings and tree shapes. 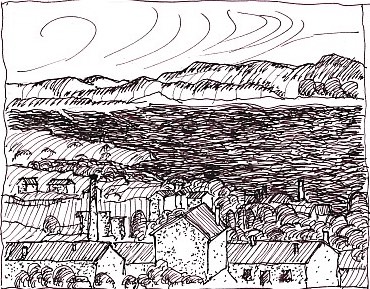 Seurat’s view of the shoreline at Grand Camp …

… is taken from a hill-top roadway leading to a village, including, notably, the gateway to a stair and path leading to the shoreline. Seurat’s “pointilliste” technique visually unifies the painting practically giving “body” to the quality of light that gives a ghostly appearance to the distant buildings.

The depth of the painting is established by the contrast of the hazy background to the sharply detailed near scene, its landscape elements and the formal gate and stair access to the shoreline. 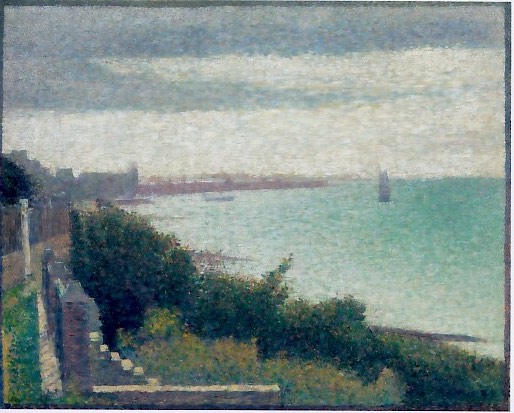 Seurat’s painting of a view of Grand Camp on the Normandy last.- ca 1885

My pen and ink sketch underscores, with tone and details difference, the contrast between front and back scenes to give depth to the shoreline, which is not visible but only suggested by the presence of what appears to be rock projections of the shoreline extending into the sea.

What is lost in the painting visual subtlety and tonal gradation, my sketch gains in clarity of landscape forms. 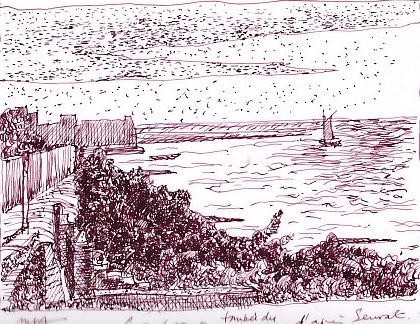 … is taken from a view point at the level of the sandy beach that reflects the bright sunlight of southern France, expressed by the use of intense pure colors so dear to the artist.

Here he is working in watercolors with complete separation of colors giving outstanding clarity to the boat hulls and their decorative treatment as well as to the sandy shoreline and ultramarine blue for sea and sky.

In that sketch I have depicted three of the four boats and the water’s edge, with no reference to sea and sky but for the simple horizontal line that separates sky from sea.Two parallel curvy lines establish the separation of land and sea, with a dotted treatment to suggest the sandy nature of the shoreline.

The spare drawing relies on details of boat construction for visual interest, in what could pass as a preliminary study for the painting. 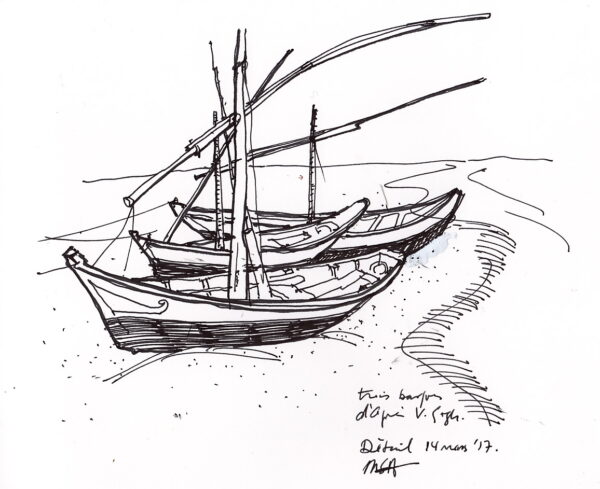 I wish to call attention to J-H Lartigue’s astonishing mastery of the photographic tonal rendition that structures his image of the shoreline at Etretat, on the Normandy side of the English Channel.

By placing the darkly dressed lone person on the sunlit section of the pebble beach he has given a center to the image, framed between a looming rock formation at the forefront and the rocky cliff in the background, with the sea in the middle ground becoming the subject of contemplation for the seated subject. 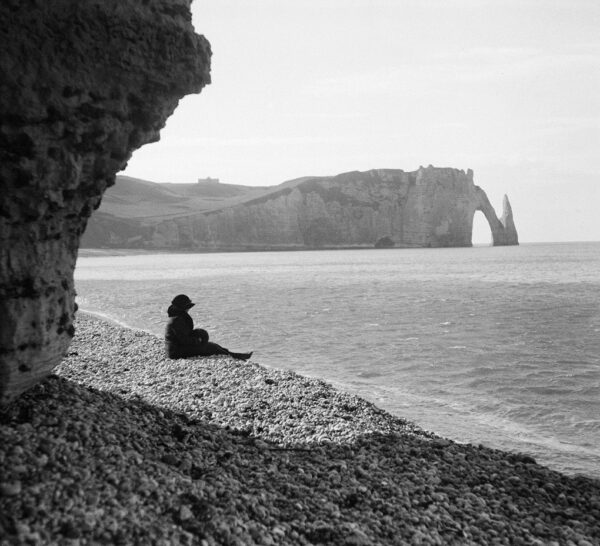 Contemplation is not an exaggerated expression for shorelines do seem to invite an existential-like awareness of the sea, powerful enough to carve up those cliffs.

While It would be presumptuous to second guess what the person seated at that fine line is thinking or feeling, I think Lartigue may have given her that pivotal place in order for us to be impressed by the force of the sea, shaper of the shoreline, now at rest.

All drawings to Maurice Amiel

The Lartigue photograph was taken from the catalog of the exhibition of his photographs of shorelines: