Something to Splash About

If this is Monday, where are we this week?

With support from three theaters, The Wallis and The Soraya in SoCal and The Harris in Chicago, Jacob Jonas The Company worked with more than 150 artists all over the globe to produce short dance films for the series, Films.Dance. Pandemic restrictions still preclude travel but for 15 weeks that started January 25, a new film takes viewers to a different world destination each Monday until May 3. The films screen for free. For Week 12 Mexico City-based Diego Mur created Xeno on Canadian circus-artists Natasha Patterson and Sabine van Rensburg. Still viewable are GALOPE set in Spain with New York’s Gonzalo Garcia, Sit Still with seven-year-old Canadian Krumper Adeline Kerry Cruz, Same Sky danced by Jacob Jonas The Company, ANOTHER SERIOUS DANCE FILM in New York with ballerina Sara Mearns, Dadu set in the Dutch hamlet of Spaarnwoude, 正念 – NOW with BeijingDance/LDTX company dancer Li Kehua (Lico), Edging Normal with dancer Desmond Richardson, Match bringing five choreographers and 46 dancers drawn from 20 countries in a scene-shifting world tour, Pássaro Distante from Brasil, Toke spotlighting Danish-born dancer Toke Broni Strandby in London locales, and Kaduna filmed in Nigeria. Mon., 9 a.m., free. New additions each Monday to May 3. Info on the full line-up of 15 films and free subscriptions at Films.Dance, The Wallis, The Soraya.

Choreographer Suchi Branfman has a long-history and burnished reputation for her work with and about the incarcerated. As part of a five year residency at a medium security prison in Norco, Branfman involved inmates in weekly sessions of dance and choreography. With the Covid–19 shutdown, plans shifted from live sessions to inmates submitting choreographic ideas in writing. Branfman turned the ideas over to choreographers Jay Carlon, Bernard Brown, Tom Tsai, Bri Mims and Irvin Gonzalez who had all worked with Branfman in the pre-pandemic prison sessions. The six dancemakers translated those written choreographic ideas into movement that has been filmed with narration provided by several former inmates. The result, Undanced Dances Through Prison Walls During a Pandemic, screens in two parts, the first this Friday and part two on April 16. The written choreography ideas were published in December 2020, sold out, and the second printing is forthcoming. Fri., Apr. 16, 6:30 PDT, free at 18th Street Arts Center.

In its new dance film somos agua: a collective honoring of our mama agua, LA-based dance troupe Contra-Tiempo explores issues of water, equitable urban planning, and art-making. The film reflects the company and its artistic director Ana Maria Alvarez’ long involvement with urban issues and underserved communities.  The premiere zoom screening is followed by a discussion on the issues. Mon., Apr. 12, 6 p.m., free with reservation at USC Visions & Voices.

Much has been written about the struggle for dancers whose work is predicated on moving to cope without live performance. In collaboration with 16 dancers from Hunter College, Monica Bill Barnes & Company developed Keep Moving. Delivered in ten chapters that can be watched one at a time or perhaps mini-marathon? Conceived and created by Barnes and Robbie Saenz, the dancers include Manuela Agudelo, Olivia Brown, Kai Chen, Anakeiry Cruz, SarahIsoke Days, Katherine De La Cruz, Grace Deane, Nadjie Forte, Reagan Gordon, Kathryn McKenzie, Naja Newell, Esther Nozea, Amanda Konstantine Perlmutter, Julieta Rodriguez-Cruz, Lina Sierra, and Jessica Son. The chapters vary in length with some videos and others audio only. Free, but advanced reservation is required to receive viewing instructions 24 hours before showtime. Streaming now thru Sun., Apr. 11 with reservation at CAP UCLA.

Still the Bella the ball

Like her seamless dancing, Bella Lewitzy moved from her initial role as choreographer Lester Horton’s muse to assume the mantle of mother of so much dance in Los Angeles. A dancer who embodied Horton’s technique, film clips captured the seemingly boneless flow of movement through her body, technique she passed onto several generations of dancers through her teaching, at the helm of her eponymous company, and as a passionate advocate for Los Angeles as an under-appreciated center of dance. There is a documentary getting its final polish, but a new YouTube channel has a preview of the upcoming film and much more. YouTube.

For now until then

Originally from Orange County, Skylar Campbell’s ballet career took him to the National Ballet of Canada. Last year, his nascent chamber company Skylar Campbell Dance Collective was booked for a June debut at The Barclay Theater. Drawing dancers on hiatus from New York City Ballet, Boston Ballet and National Ballet of Canada, when the pandemic shutdown live performance here, the debut instead was online from Canada . The Barclay still plans to present the ensemble when live performance resumes, but for now, the venue announced SCDC’s three-part dance film Traveler with original music by OC’s Josiah Johnson. Free. Part one with Campbell and Jackie Oakley, Part two with Ben Rudisin and Calley Skalnik, Part three with Hannah Fischer, Rudisin, Oakley, Skalnik, and Campbell. After last week’s premiere, the three parts are at Skylar Campbell Dance Collective.

Three to present one

Three theaters joined forces in early March to present a free performance by flamenco artist Israel Galván in Maestro de Barra. Reviewers have described Galvan as a master at capturing the fiery spirit and quicksilver footwork of this percussive art form without dancing into movement clichés. Moving outside traditional confines of flamenco, Galván has collaborated with jazz musician Pat Metheny and contemporary choreographer Akram Khan. Kudos to the three presenters, especially UCLA’s Center for the Art of Performance (CAP UCLA) which continues to offer the performance thru May 31. Info and free access at CAP UCLA.

Drawing its title and subject matter from Clint Smith’s poem “How to Raise a Son,” the poet gives voice to his words as the camera follows dancer Dennzyl Green. A current member of the Nannette Brodie Dance Theatre, Green performs and shares choreography credit with Brodie. The film is the latest contribution from NBDT and the South Coast Dance Alliance. Free online on Vimeo.

Is there a sequel?

Originally staged in 2016 to sold out audiences, Invertigo Dance Theatre’s After It Happened joins the Ford Theaters video line up of encore performances. Set in the aftermath of a natural disaster, the work considers how a community rebuilds and scavenges for signs of hope and resilience. With the current tragic pandemic possibly headed toward containment, After It Happened offers a thoughtful consideration through dance that suggests ways to create and build a new normal. Free with reservation at The Ford or Invertigo Dance Theatre.

The SoCal contemporary ballet and aerial company Luminario Ballet has posted links to recent performances and also announced it has a new dance film coming sooon. The films are free at Luminario Ballet.

Over the past year, choreographer Melissa Barak and her contemporary Barak Ballet shifted online several fine filmed performances, a virtual gala, and its own instagram channel.  Some of the films are free at their website and Instagram.

One of the most powerful filmed efforts from last year remains This is Me – Letters from the Front Lines from Diavolo Architecture in Motion and its Veterans Project. The film’s insights remain painfully true as military veterans who now are first responders confront what it means to be a warrior on the front lines of a pandemic as they gymnastically inhabit a world of pipes and moving structures while articulating the personal and professional realities of being on the front line of Covid-19. Diavolo.

Early in the pandemic, the street dance troupe Versa-Style Dance Company displayed a natural affinity to online streaming of performances and classes. The most recent film, Ending The Year With Hope, continues online and the company has a video filmed at the beach as part of the Music Center’s For the Love of LA series. The company’s YouTube channel hosts performance videos and videos on a range of life-skills subjects geared to young adults, but with pointers for all ages. Info and  videos on YouTube and Versa-Style website.

The past keeps on keeping on

While the theatre itself remains closed, the Ford continues several online series showcasing past dance and music performances. The array of local dance companies in the line up reflects how the beloved al fresco venue functioned as an informal summer dance festival showcasing the energy and diversity in SoCal dance. Look for contemporary from Lula Washington Dance Theatre, street dance from Versa-Style Dance, Brazilian from Viver Brasil, plus traditional and contemporary folkloric dance from Grandeza Mexicano Folk Ballet Company, Pacifico Dance Company, the LA Phil’s exploration of Tovaangar Today with dancer Ba’ac Garcia, and contemporary South Asian, Bollywood and Bhangra dance from Achinta S. McDaniel and her Blue13. All free. Complete calendar and information at The Ford. 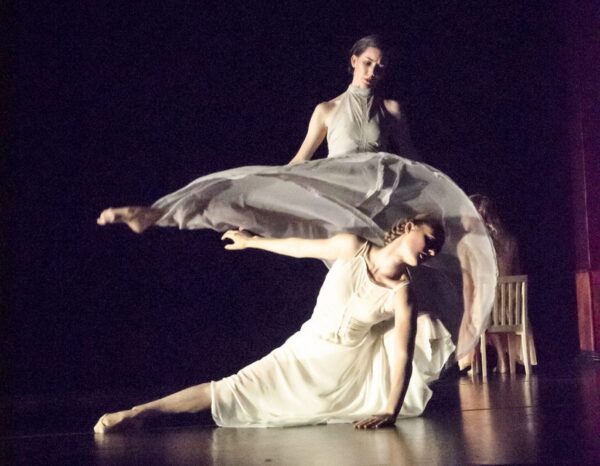 The pandemic caught Pasadena’s Lineage Dance Company in the midst of construction of its new Lineage Performing Arts Center as well as figuring out how to offer classes and performance in a pandemic. The construction is finished and the dance company has scored with several videos including its most recent staged in Pasadena’s iconic Gamble House. Videos free online at Lineage.

The dance department at Cal State University Long Beach is among those shifting online videos to new dance channels on You Tube while also streaming two performances with dancers observing strict Covid-19 protocols. Those performances and more are free on YouTube.

The movement and the music

Choreographer Pat Taylor’s work for her JazzAntiqua Dance and Music Ensemble ranges from pure celebration of the music to thoughtful considerations of the fight against racism and injustice. Videos stream for free at the JazzAntiqua website and YouTube.

With a new weekly online broadcast of a past performance, classes, workshops, and conversations, Viver Brasil was among the earliest LA dance companies to shift online and continues as one of the most active with videos, classes, workshops and more. Viver Brasil. The troupe also is part of KCET’s Southland Sessions streaming at KCET.

During the initial Covid–19 shutdown, 15 dancemakers created 90-second solos reflecting the range of reactions to the shelter-in-place order last spring. All 15 are collected in Emily Mast and Yehuda Duenyas’ project HOW ARE WE . Stream for free on Vimeo.