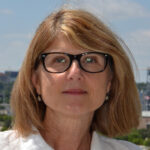 From Her Chair in a Hoop of Pale-Yellow Lamplight

my mother says my dead father is in his Heaven.
She believes for him it’s a seamless blue sky

through which he navigates endlessly a cargo plane
like the ones he flew sixty years before.

He always said his war years were his happiest.
It’s an old chair, covered in a faux-silk print

meant to look like French Provincial, a poor woman’s
idea of class, the one in which for years she’s rested.

Do you remember, I ask her, those nights Dad
wanted to show us how he could read, he said,

my ten-year-old mind—think of a number—
No, she says. Now she asks what I believe

happens after we die. My father’s gone, I say,
as gone can be. No heaven, no hell. I don’t tell her

I see him in the crooked back of an old man
pushing a cart at Target, in my own angry eyes

in the mirror. On those nights, I remind her,
you sat in this same chair, as this same yellow light

cast the rest of the room into shadow, watching
us on the couch. The numbers, I say, came swirling

out of the dark beneath my eyelids, white hot
as the center of a flickering candle flame,

and we waited, you and I, in silence for him
to call them. For him to tell us what I saw.

Poem Beginning with a Line from Prado

Once in a while God takes poetry away from me—
and then the silence is a barred door.

by the pumps, gage past E. It’s the rockfall
that buries the pass, the drowned, single road

home. The angry beloved who won’t answer
your text. It’s the power out for days.

No matches, no candles, no batteries.
A busted flashlight. No voice on the radio

to companion you. No quicksilver shaft
of moonlight piercing the dark.

Susan Aizenberg’s newest collection, A Walk with Frank O’Hara and Other Poems, is forthcoming from the University of New Mexico Press as part of their Mary Burritt Christiansen series. She is the author as well of two earlier full-length collections, Quiet City (BkMk 2015) and Muse (Crab Orchard 2002) and of a limited edition letterpress chapbook, First Light (Gibraltar 2020). Recent poems have appeared or are forthcoming in Plume, American Journal of Poetry, On the Seawall, Blackbird, The Night Heron Barks, I70, and elsewhere. Her awards include the VCU Levis Prize and the Nebraska Book Award for Poetry. Aizenberg lives and writes in Iowa City. Her website is: https://susanaizenberg.wordpress.com.