Working together seamlessly, Telmo Pieper and Miel Krutzmann (known collaboratively as Telmo & Miel) both enjoy working in realistic styles, with loads of contrast in subjects. Technique and style have a high priority in their pieces, and true craftsmanship is what they want to produce. They work separately on ideas for murals and come together with the sketches to see if combinations can be made. The result of this collaboration is usually very surrealistic, with amazing attention to detail. They always work on the same piece together and are able to switch places when ever wanted or needed.
The creative duo worked on their creative abilities from a young age. They came to know each other at Rotterdam’s Willem de Kooning Academy in 2007. Telmo, 25, was a talented young illustrator and designer. Miel, 31, painted walls for several years with spray paint, practicing the art of graffiti. In that period they started working together on walls, and went on to become the ambitious artistic duo they form today.
After the Academy, an opportunity presented itself to move to the Sober Concept Store, where Sober Industries (also acquaintances through the academy) just started at their new studio and shop space. This is the spot where the company ‘TelmoMiel‘ became official in the beginning of October 2012.
As the collaboration progressed, and all the other creatives anchored at the Sober Store, the decision was made to give the overall creative platform a name: Sober Collective. A team and family of creatives that can support each other in any way necessary. Everyone with their own set of skills, so endless conceptual combinations are made possible.
From that home base, Miel & Telmo are working hard to become a steady factor in the world of graffiti and street art, while keeping a close eye on the contemporary scene. I recently had the pleasure of interviewing these talented men and offer it here: 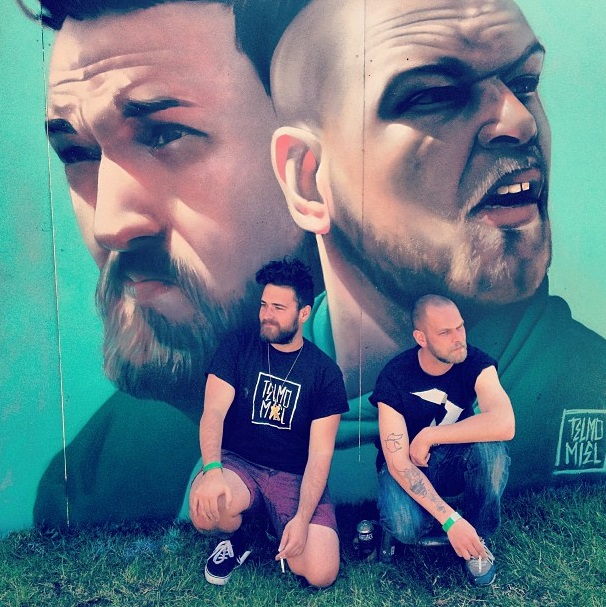 Could you tell us a little about yourself, where you guys are from, how did you guys meet, and how did you get started in the urban art scene?
We are Telmo Pieper and Miel Krutzmann, both from different cities in Holland. We met at the Art academy in Rotterdam and started painting walls together since that period. We skipped classes together to paint walls and get our painting skills up. When we finished school we tried to develop more and get our name out there.
Are you a full time artist or do you do this as a creative outlet?
We are both full time artists and since the last three years we can live from our work.
How would you describe your style?
The style we are exploring at the moment is a Surrealistic style with the emphases on realistic. We love making imagery with a positive feel, a little humor and some romance. We evolved a nice process together to come up with new sketches and concepts that allows us to play with Realism, Abstraction and graphical influences. 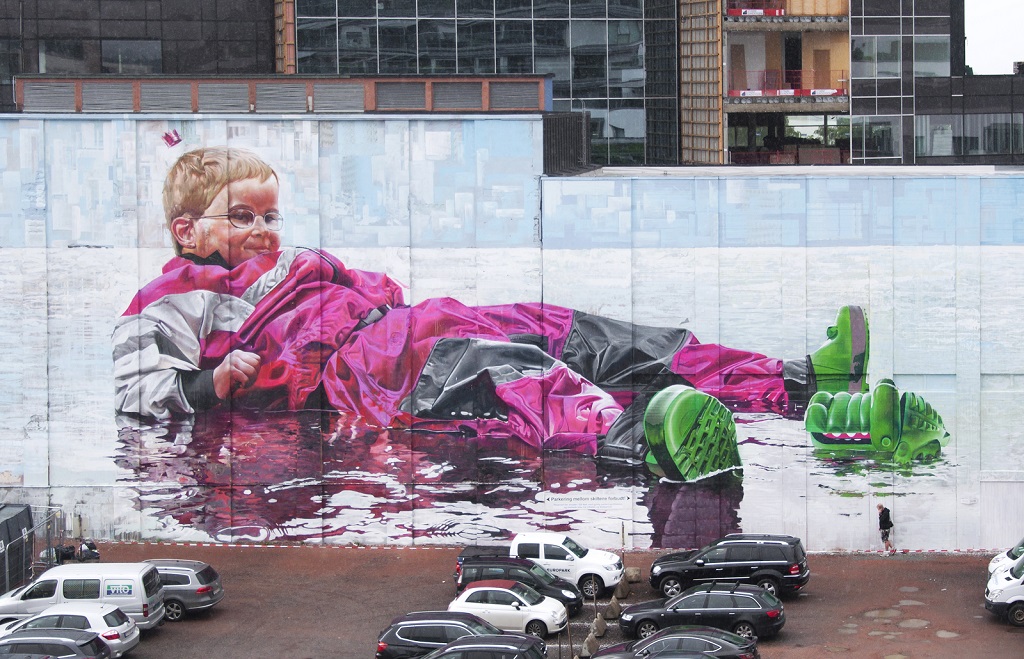 How much does your art affect or influence your everyday life and are there any role models or artists who inspired you?
The main thing in both our lives is Art. So it’s needless to say it influences our everyday life in every way possible. It’s a passion and it’s work, it’s ambition and it’s a kind of love. I wouldn’t say we still have role models, but a lot of artists inspire us. I can say names like; Herakut, Case_Maclaim, Alexis Diaz, Daim FX, Etam cru, Robert Proch. But those are just some of the names in our scene that we enjoy following. I can say more names like; Rembrandt, Tieme Rietveld, Sober industries etc. But as music and every form of creativity, feeling goes beyond styles or names or creative output. Falling in love with something man made is very individually decided on gut feeling, taste and substantiation from personality. No boundaries, no boxes. The next thing that inspires me can be from an artist i didn’t like for years, just depends on the way the world turns.
Has your style developed throughout the years?
Our style has developed a lot, and we’re still developing every single day. That’s part of being an ambitious artist i guess, trying to challenge yourself every time. Force yourself to think differently, approach it differently. Digging deep to get the best result you can and to grow with every piece done. 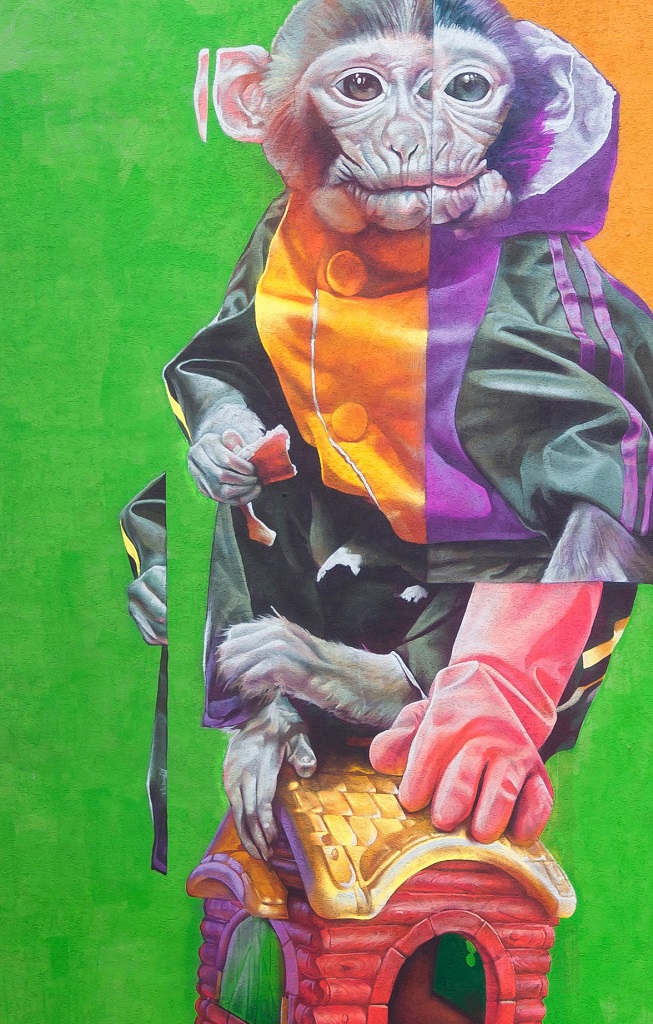 Who are your favorite street artists? And why?
Robert Proch i like for his use of colors, composition and materialism. Etam cru i like for their romance, style and concepts. Daim FX i like style wise and esthetically. Wes21 and Onur i like for their creative thinking and also color usage.
Is there a message in your art?
Sometimes there is and sometimes there’s not. It’s a thing that goes up and down. We can do a very conceptual piece today and have something more based on esthetics rather than concept on the next day. But the overall thing we want to portray is a positive and playful view on the world, which we think people need. Some artists think it’s necessary to make people think, and that’s good. But we actually think it’s necessary to make people stop thinking for a while. Too much thinking can be a killer, and it’s nice to just stare at something for a while that’s beautiful to look at just because it’s beautiful. The work we do doesn’t need to make sense, it doesn’t need to have a message. It might have those things, but it isn’t a must. The only thing it really needs for us is to speak to the viewer, on one wavelength or another.
What have been your most challenging and rewarding piece of work thus far?
One of the craziest projects this year (April) was one we did in Loose Creek, Missouri. We did a reasonably sized mural in the middle of a farm area in America. The piece we made was for this amazing big family that has been running the farm for several generations. They took us in and treated us like family. We painted the grandfather, who started the farm a long time ago, as a child. The whole thing was in combination with a film crew, including director Selina Miles, and the reveal was something really special. The father’s reaction was very emotional and everybody was in a good place at that moment, which was captured beautifully on camera. You can check out the video on our page or website. It’s called ‘A more beautiful barn’. This was particularly special to us because normally we make a piece somewhere in a city for the city. But this was very intimate with and for that family. 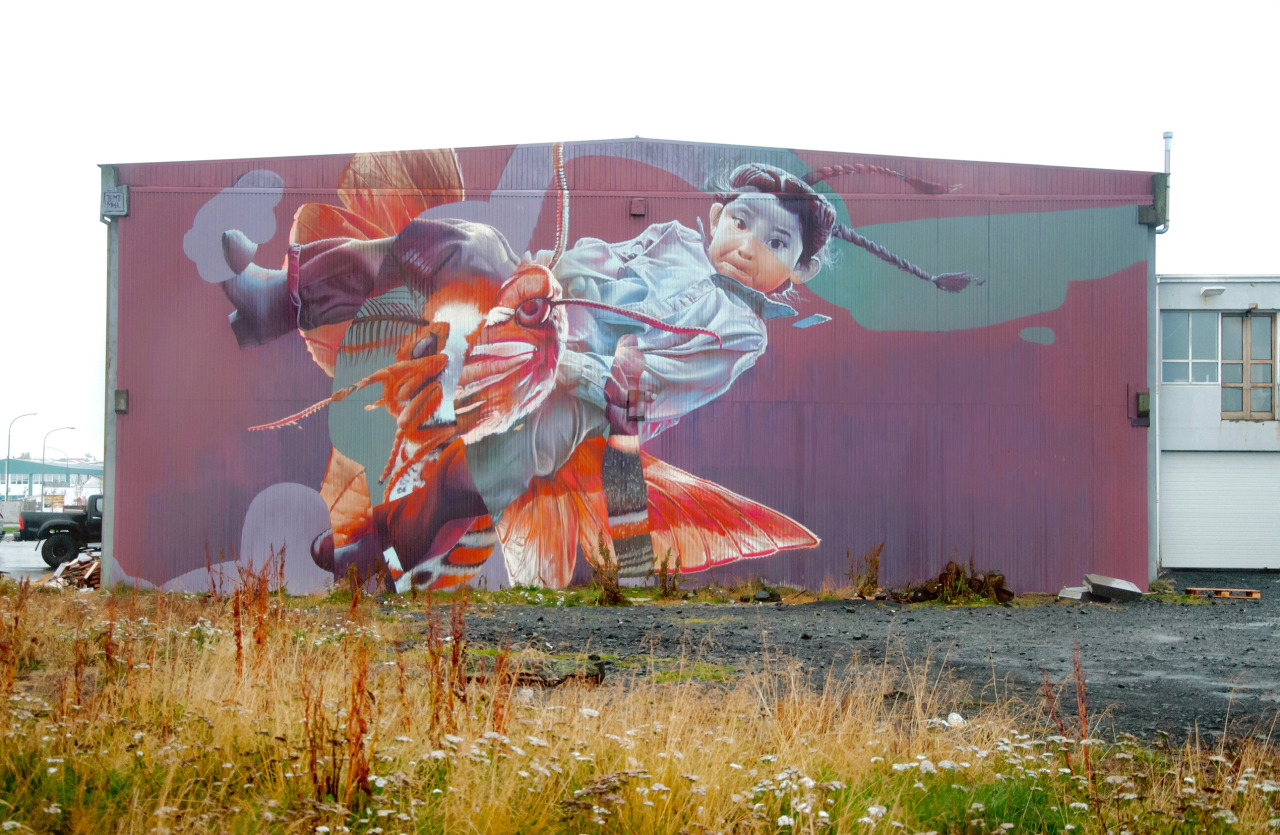 What are your thoughts on the way the internet is influencing the artworld?
We wouldn’t have been able to do what we do without the internet, it makes so much possible. Internet is a kind of freedom that mankind didn’t know before, that’s why this generation is hooked.
While some claim the physical danger of working outdoors makes women reluctant to participate. In your opinion, is it hard for women to compete is the street art world that is somehow dominated by men?
I actually don’t think it’s more difficult for women. Sometimes i feel a bit tired of women bringing up that it’s twice as hard for them to make it, just because i think it is not true. I think nowadays that is just an excuse for if or when it fails. Of course there’s still sexism in the world which sucks. But if your a good artist it doesn’t matter if your a man or woman. Look at Natalia Rak or MadC just to name the first two that come to mind. They are smashing it out there. I feel it’s just that less women are interested in doing it then men are. The physical danger could be a part of that, but i think if the ambition and skill is there, a lift shouldn’t stand in the way.
I would like to add that as a woman pursuing an art career, it’s not really helpful to make a selfie with your artwork every time. If you pursue an art career, just show your art. Don’t make it about something else. 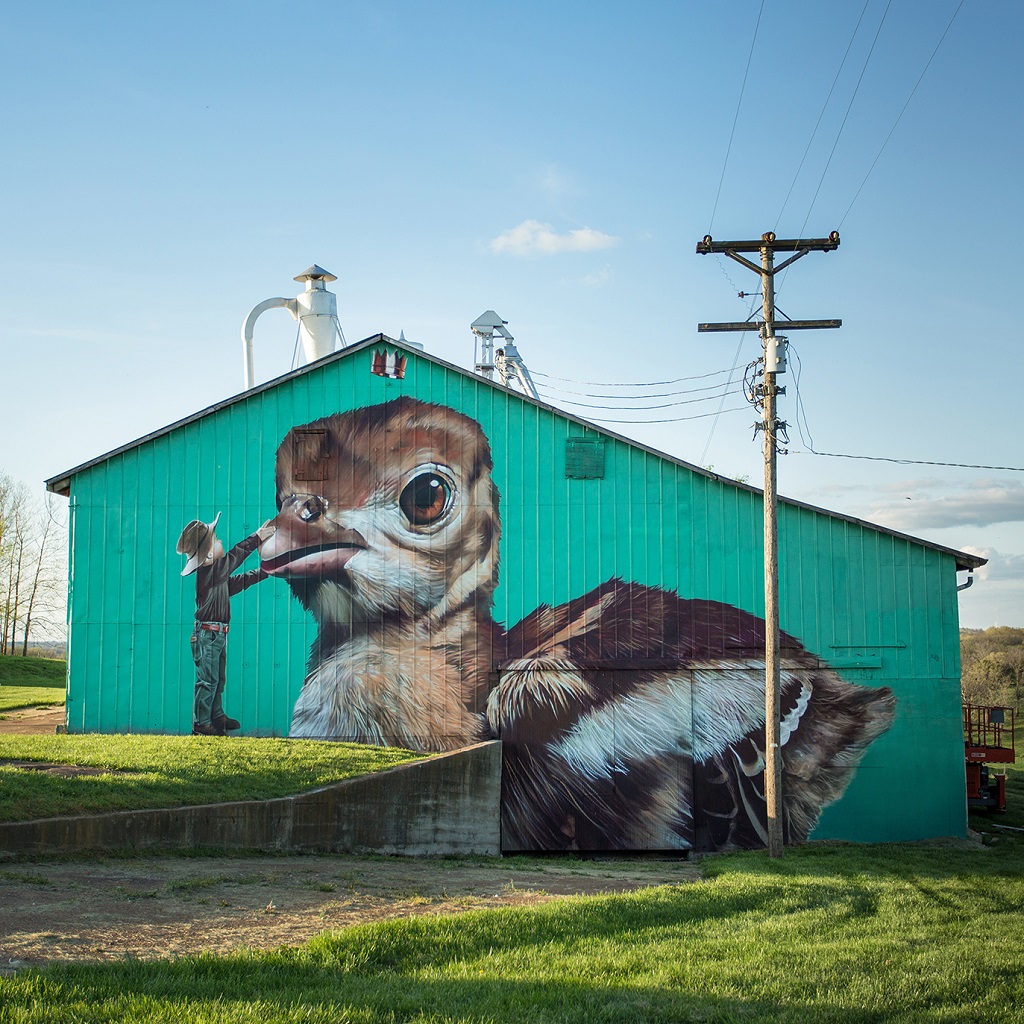 Have you painted in the USA? If so, how was your experience like?
We’ve painted in the US a couple of times. Did some stuff in NY, Miami and Missouri. Our experience has always been really nice after passing the customs at the airport. It’s amazing how the people that work there can give you the feeling that you did something wrong, while you did not. But maybe that’s just in our case because we look like two techno vikings. The painting has always been fun and we love to visit the US every time we get a chance.
What do you do when you are not creating art? What are your hobbies?
My (Miel) hobbies are creating music and spending time with family, friends and my girl. Telmo’s hobbies are doing photography, playing soccer and of course also spending time with loved ones.
What’s next for you? What shows or projects do you have planned?
We are currently in Iceland doing a mural for a project with Urban Nation in association with Airwaves Festival. After we’ll do a large mural in Belgium for project ART17. Also we’ll be working for Spectrum exhibition and festival in New Zealand at the end of the year. Next solo exhibition will be somewhere next year. 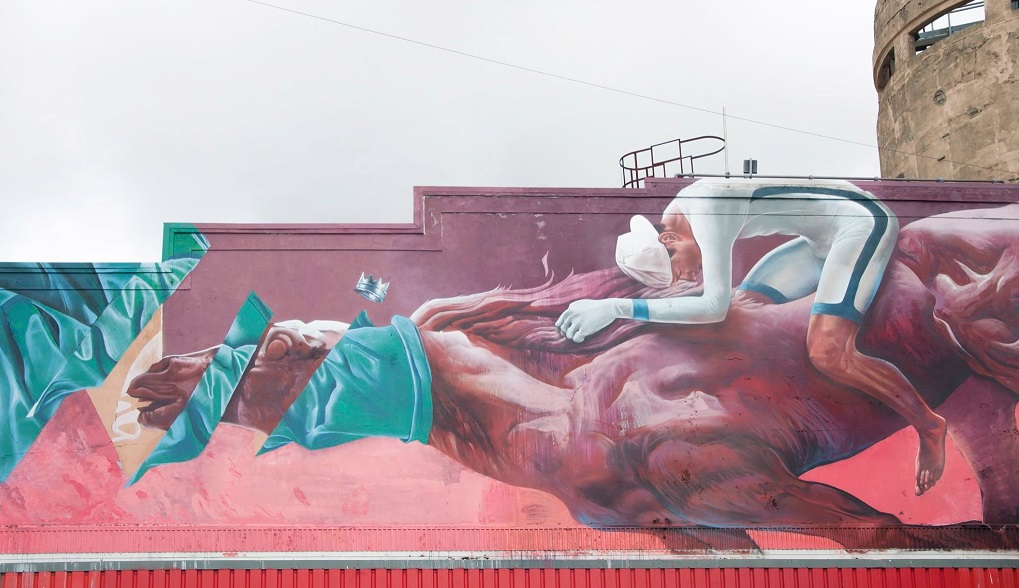 Any words of advice for aspiring new artists?
Think big. Don’t limit yourself till you know yourself. When you know yourself better you also know how to limit yourself in a way that helps you creatively. Also be very aware of the fact that making the art is just a small part of being an artist and being able to make a living out of it. It’s not a 9 to 5 but it’s a 24/7 job.

View Author Archive
Sami Wakim is the founder and editor of Street Art United States, an online community that supports street artists and has well over 100,000 followers worldwide on social media. Sami has organized several legal street art murals in the Boston area and has hosted local and international artists who have contributed to the flourishing street art community in the city.