The Economy of Harshness: Peter Bagge and HATE

Hate, a body of work created by Peter Bagge, was a brilliant, stunningly original comix series that ran throughout the 1990s. For a good portion of its run, Hate’s setting was Seattle, where Peter Bagge had made his home. Its inception, by dint of lucky timing, coincided with the advent of the age of grunge. (Hate, though, took a typically jaundiced view of the whole scene.)

Capsule summations of Hate never quite hit the nail on the head: a slacker opus, a grunge comic. These understandable descriptions are not inaccurate. Yet, by the same token, they aren’t exactly accurate either. This is a testament to Hate’s complexity and depth.

Its protagonist was twentysomething Buddy Bradley and his broad-based, (very) idiosyncratic low-rent cohort, engaging in all the expected activities one would envision of a low-rent cohort in the 1990s: Enduring a series of dead-end jobs. Drinking and dissipating. Battling it out with roommates. The furniture in Hate gave off the aura of being—at best—secondhand. There were, no doubt, springs popping out of an ancient couch.

Hate devoted copious attention to this bacchanalia on the cheap, but it also took many detours, some of them insightful, affecting explorations of lives lived without much—if any—expectation that something better was on the horizon.

Fantagraphics has recently released a special, all gussied-up boxed set of Hate, giving it the gravitas it deserves, while at the same time being slightly incongruous, given Hate’s no-frills locus. 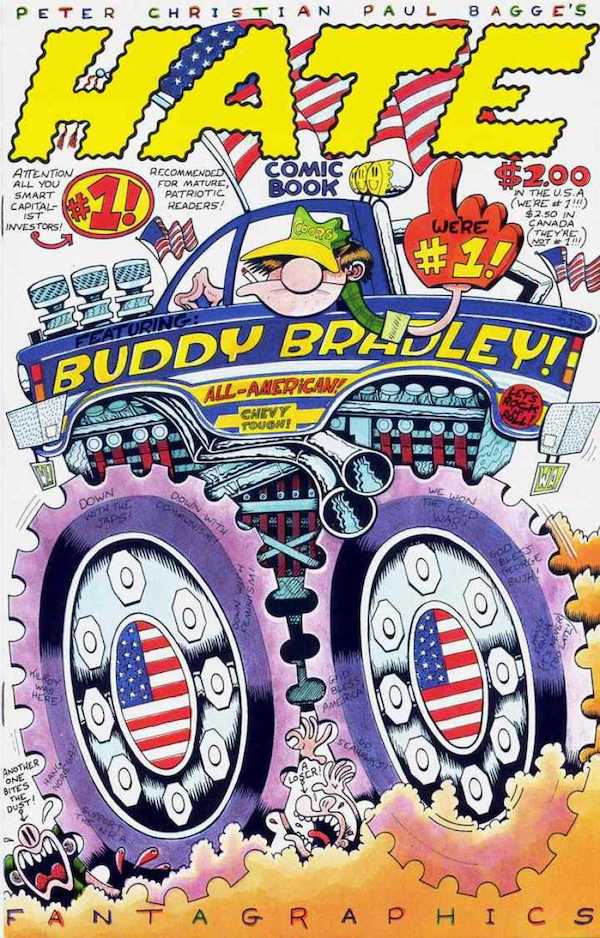 When I began reading Hate in the 1990s, its depictions of Seattle did not seem that dissimilar from New York City, where I was living: cheap eats, used record stores, three bands for ten dollars. Seventh Avenue, Park Slope’s main drag, had three independent bookstores within the radius of a few blocks. I read Hate out of order, prowling through various comix shops, at the whim of whatever issue happened to be in stock at the time. Sometimes I would read my newly purchased copy on the subway, occasionally bursting into laughter.

Peter Bagge was gracious enough to take some time and answer my questions via an email exchange, something I truly appreciate. Hate’s cast of characters used a copious amount of fucks and weren’t, to say the least, what anybody would call refined. Bagge displayed an obvious affinity for this milieu, but—-crucially–the affinity never morphed into an endorsement of what the characters were doing and saying. Bagge walked a razor-thin line, deploying an economy of harshness. In lesser hands, Hate would have devolved into pure sensationalism or smuttiness. It was as if he filmed a documentary, letting the viewer draw their own conclusions.

“I wanted my characters to all act and speak naturally,” he told me, “the way people do (or at least did back then) in private as well as in public. To do otherwise would have felt forced or self-conscious, not to mention unfunny. Interestingly, I haven’t drawn anything sexually explicit in almost twenty years – it doesn’t even occur to me to do so these days – so I’m surprised in retrospect at how casually I would portray such scenes back in the day.”

Readers of Hate were privy to the characters’ every waking moment, but ultimately it was hard to codify them. The Hate world had elements of bohemian or counterculture: the usual avenues of societal acceptance were not in any way a part of most of the characters’ makeup. Any political leanings, though, had been swapped out for pop culture ephemera, obscure bands, fast food. It was a sort of meat-and-potatoes demimonde, a subculture both simultaneously unconventional and strangely traditional. To Bagge, “I was simply depicting various archetypes that moved about in the same social circles that I did. Young, urban-dwelling misfits who were trying to find their place in the world while simultaneously trying to understand themselves. It’s that latter part, understanding yourself, that we were all less open about, though, including myself. No one wants to state their confusion out loud to avoid seeming dumb or vulnerable. So we go about sampling things – music and clothing, artifacts from the recent past, etc. – just to see what fits. It’s both exciting and awkward.”

Hate, though, was far from an exercise in gritty hyper-realism. There was a steady, off-kilter inflection that ran throughout, another testament to its originality. Characters occasionally broke the fourth wall, directly addressing the reader, which Bagge modestly explains as “just me indulging myself. I’m not sure it was always a good idea–and I even questioned myself doing it while I was doing it–but if it made me laugh, then why not?”

There was verbal ingenuity to Hate as well: A woman, about to swap albums with Buddy, offers to “’sweeten the pot’”-—quotes included, underscoring the speaker’s ironic intent. Buddy, in the midst of a heated dispute, comes back with a retort that will, he says, make “Swiss cheese” out of the countering argument—-a colloquialism that was probably last trotted out during the Eisenhower administration.

To Bagge, there was an element of serendipity in this: “This may be one of the aspects of Hate that may have been too in-jokey, but me and my closest friends all read, watched and listened to work that preceded us by at least a generation, so if certain dated phrases worked for us or simply amused us we would use it. I lived in such an oddball bubble that I was barely aware of how outdated these expressions were when I used them. To this day my wife will occasionally remind me that I use expressions that no one other than a handful of my friends use, such as ‘good grief,’ which I’ll say with no hint of irony.”

Hate also made crucial, judicious use of sound effects, but instead of bang! or pow! the sound effects carried an inner dimension: A character barging into a room garnered a BARGE! Buddy, smoothing and flattening out some of his prized comics, did so to the sounds of smooth! and flatten! “I always liked both literal or original sound effects. I’m making comics, so I might as well use them, right?” 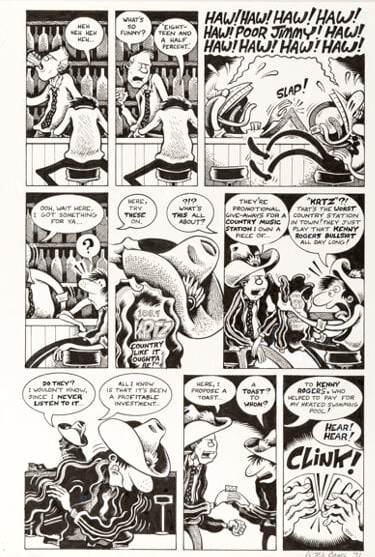 A page from Hate by Peter Bagge

It is hard not to look nostalgically at Hate and its era, although a huge amount of misery was embedded within the pages, including characters going through heroin addiction and another character committing suicide. That thrift-store lifestyle—-in Hate and in real life–could be a deliberate choice or a dead-end trap. What is worthy of nostalgia is the tactile, social aspect of record emporiums and bookstores, idiosyncratic magazines, revival houses, etc., all of which Hate conjured up so evocatively. These cultural streams, of course, still do exist, having migrated online. But it’s certainly not the same.

Is this (tempered) nostalgia warranted? Peter Bagge is reassuring on that front. “Of course! Digital technology has been such a mixed blessing, and its downsides are very apparent when I reread Hate or other work from that period. I felt all of this strongly too when I watched that mini-series with Fran Lebowitz on Netflix, which also brought back mixed but mostly fond memories of NYC back in the day. But this is just geezer talk, of course.

“And unlike Ms. Lebowitz, I take full advantage of computer technology, so I’d be lying to you and myself if I said I’d rather go back in time. But things sure were much more visceral back then. People used to be pressed up against each other! Now, especially with Covid, we’re all so physically detached. You would think that would make us all more peaceful or magnanimous, but instead it makes it too easy to demonize anyone who annoys you in the slightest. I’m sure that’s why people behave so badly online–you can’t see let alone touch the person you’re trashing, which makes it all seem unreal.”

Hate was a peerless—and rare–look into the quotidian, with a complexity and authorial voice that made it very distinctive. Roaming around in comix shops may be a thing of the past, but Hate’s characters and their numerous flaws, emotions, and messy existences are still very apropos. It is an enduring work.

I'm a writer based in New York's Hudson Valley and the author of (among other things) the novel Petroleum Transfer Engineer (Underground Voices). My work--fiction and nonfiction--has been featured on Public Radio International's Studio 360 and has appeared in the Atlantic, the Brooklyn Rail, the Forward, Akashic Books' "Thursdaze" series, whimperbang, and many others.
www.richardklin.com

Tags:
Previous Article
The Day I (Almost) Stormed the Capitol
Next Article
Shakespeare on Despots, Power, and Finally… Transition