Tory DiPietro Sees the Light at the End of the Tunnel

Between the lingering Covid-19 pandemic, unresolved political turmoil and months of social unrest, it’s safe to say that 2020 and the first part of 2021 has not been one of the most uplifting chapters in American history. It was in this spirit of feeling the collective malaise that neon artist Tory DiPietro dreamed up her latest piece, “The Light at the End of the Tunnel – Heart of Los Angeles.”

DiPietro is creating a huge neon heart that is 20 feet tall and 15 feet across that will be installed at the west, exit end of the 3rd Street Tunnel just before Flower Street. The installation will not only include the large red neon heart, it will be bisected with a back lit neon “Los Angeles” in white plate steel. Above, neon glass tubes of purple, blue, green and yellow will glow a welcoming and inspiring rainbow of color.

DiPietro describes it more eloquently: “Visually the piece is a giant rainbow heart that will halo a red back glow with Los Angeles across its center,” she says. “The rest is an overhead rainbow that will beam light from above as you begin to exit the tunnel and create a bit of a magic escape back into the colorful city. The tunnel is built with large beams that cast bold shadows that once lit will fill with rainbow colors, the saturation of each color dependent on the shadows cast by the structure of the building.”

The title of the piece “The Light at the End of the Tunnel – Heart of Los Angeles,” is obviously self-explanatory, but the piece is something very personal to the native Angeleno artist. “We are living one of the darkest chapters in recent human history, collectively living in uncertainty,” DiPietro says. I believe moments like this call for massive acts of love and light.”

The Heart of Los Angeles Will Always be Brighter

DiPietro loves Los Angeles history deeply and she is thrilled to make her contribution to the city’s built environment. Born on the Eastside, DiPietro is Italian and Mexican and grew up going back and forth between Montebello and Temple City. Previously she has created hundreds of neon pieces, but most of them were much smaller than this. The lifelong artist has really found her groove as a neon artist over the last four years. Following the murder of George Floyd when the Black Lives Matter marches gained critical mass last June, DiPietro created a neon sign that said “End Systemic Racism” that she mounted to the top of her car and drove to the protests and across the city. 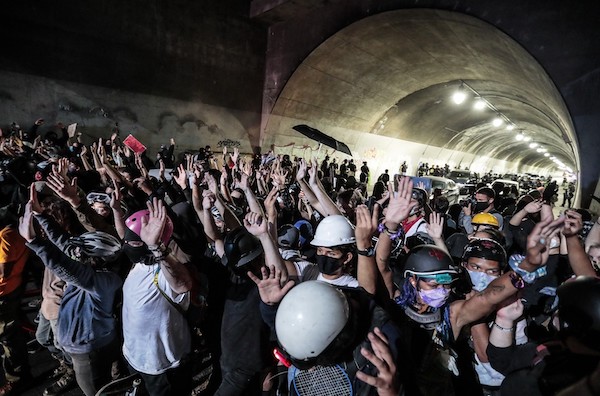 DiPietro got her start in neon art learning from the renowned neon artist Lili Lakich about five years ago and within a year, she was producing stellar pieces that were on display in galleries, private residences and even the Museum of Neon Art (MoNA)  in Downtown Glendale. DiPietro was featured in MoNA’s iconic “She Bends” exhibit in the Fall of 2017 that featured women neon artists.

Corrie Siegel is the executive director of the Museum of Neon Art, and she considers DiPietro a part of a new vanguard of young neon artists in Los Angeles that are revolutionizing the world of neon art. “It is critical for art to light a hopeful beacon during this very challenging period for all Angelenos,” Siegel says. “DiPietro creates socially engaging art that reaches beyond the craft of neon signage to address important issues in our society.” Siegel is right and the public agrees because DiPietro has now sold over 200 original neon pieces since Spring of 2017.

The Power of Neon

DiPietro’s work has caught the attention of Adolfo V. Nodal, the acclaimed cultural producer and neon veteran who has signed on to help DiPietro get the permissions and material needed to make this monumental piece come to light. Nodal has a long history with neon dating back to when he was running MacArthur Park Public Art Program and serving as the Director of Exhibitions at Otis/Parsons when it was across the street from the park, before it moved to Westchester. Nodal was living in the Ansonia Building which faces the park and reading a lot of Raymond Chandler at the time.

One of Chandler’s most iconic quotes about Los Angeles is from his book The Little Sister:

“I smelled Los Angeles before I got to it. It smelled stale and old like a living room that had been closed too long. But the colored lights fooled you. The lights were wonderful. There ought to be a monument to the man who invented neon lights.”

Nodal realized that many of the old neon signs around the city were not on. “I had also noticed the dead rooftop signs on top of my building , and ringing the park (the Asbury, Westlake Theater, Olympic, Park Wilshire and Wilshire Royale buildings.) So I set out to restore them,” he says “This was in 1986. Since then we have restored over 186 neon rooftop signs in Mid Wilshire, Hollywood and Downtown.” See this link which shows most of them.

In the following years the Cuban-American Nodal went on to become the Director of the Los Angeles Department of Cultural Affairs for 14 years, where he was instrumental in greenlighting other transformative civic arts projects like Vermonica and Mariachi Plaza. In more recent years he has even got 100 historic neon theater signs turned back in his birthplace, Havana.

Nodal met DiPietro in 2019 after hearing about her work from Under Spring author and cultural maven, Jeremy Rosenberg. Nodal is a friend and mentor to Rosenberg,  and Nodal  had told Rosenberg that he was planning a big gallery show called “Punk Neon.” Rosenberg knew the moment he saw DiPietro’s work that Nodal would love it. They visited DiPietro’s studio in Venice together in late 2019 and were slated to have her in the forthcoming “Punk Neon” show, but then of course this was before the Covid-19 pandemic.

Fortunately DiPietro remembered Nodal when The Light at the End of the Tunnel idea came to her in late March 2020. She told Nodal her vision and he immediately thought it was on the same level of significance as other transformative public art projects he has shepherded like the Lewis MacAdams Riverfront Park, and Lauren Bon’s Not a Cornfield in Chinatown. He immediately went about helping her make her vision a reality. Nodal is well acquainted with the bureaucratic process of what it takes to make public art a reality.

DiPietro, Nodal and Rosenberg secured multiple key endorsements including the local City Council office who has reviewed the project and approved it. The Downtown Los Angeles Neighborhood Council, CCA and Downtown Center Business Improvement District are also supportive. Ventex Technology, a leading neon supply company based in Texas, has provided the transformers to power the artwork. And now the project is undergoing technical review at the Los Angeles Bureau of Engineering.

Cultural organizations are major supporters as well.  LA Plaza de Cultura y Artes, for example, is serving as the project’s Fiscal Receiver for larger donations and a jury for their Eastside Arts Initiative just awarded DiPietro a grant for public artworks. (The other two awardees were the The dA Center for the Arts’ Magu Tribute Mural in Pomona, and Willie Herrón’s La Doliente de Hidalgo Mural Restoration in City Terrace-East Los Angeles.)

LA Plaza’s CEO, John Echeveste, says of his organization’s interest: “We believe that this very important artwork by the emerging Mexican-Italian neon artist Tory DiPietro will be a great addition to the Downtown L.A. streetscape and will help tell the story of Latino/multicultural artists and their response to Covid-19 and the social justice reckoning that we are experiencing today.”

For DiPietro the fact that her vision is about to become reality is indeed surreal. “I am an entirely independent single woman artist,” she says. “There’s no trust funds. I am doing this on my own.” Beyond her neon art, DiPietro has also helped feed a lot of folks during the pandemic by creating care packages of food and delivering them to Skid Row.

Nodal volunteered his time to make “The Light at the End of the Tunnel,” happen along with the project’s architect, A-Industrial Design. “We are relying on crowdfunding to raise a substantial part of the budget to create this artwork,” Nodal says. “This is an artist-initiated pandemic response project. It’s hard to find traditional sources of arts funding right now since cultural organizations are struggling.” Nonetheless, more than 150 people have already contributed to a GoFundMe fundraising account to cover some of the project cost.

Nodal even envisions renaming the intersection at 3rd and Flower, “Rainbow Square.”

“After the piece is installed,” Nodal says, “we would like to continue to upgrade that site and name the intersection of 3rd and Flower Streets ‘Rainbow Square’ to further identify the site with the new artwork. It is a strategy for keeping it relevant. I think that giving that piece of forgotten and blighted space an association with the Neon Rainbow will start to evolve it into a better place.”

In fact, a place whose most indelible moments might come during the rarest of moments. “On the days we are fortunate enough to experience L.A. rain,” DiPietro says, “the rainbow will reflect through the entire wet street, giving us an actual rainbow road and providing the city with a bright corner on even the greyest days.” 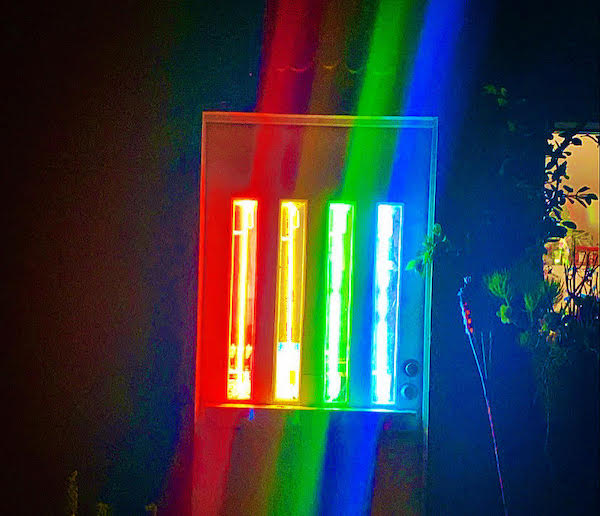 In the end, for Tory DiPietro, it all comes back to her love of Los Angeles and giving our citizens light at the end of the tunnel. “With this project,” she says, “I hope to overpower recent memories of the isolation and uncertainty with hope and something beautiful and magical that can spark new imagination in the minds of children who travel through the tunnel, offer a happy detour to adults on the ride home after a rough work day, and leave an impactful reminder that no matter how dark things get, the light and heart of Los Angeles will always be brighter.”

1
Tags:
Previous Article
LIFE AFTER BIRTH–INVASION OF THE DEMOCRACY SNATCHERS
Next Article
David A. Romero: “My Name Is Romero”