TV is no longer the medium - it's the brand.

In the fourth episode of WandaVision, a group of SWORD (Sentient World Observation and Response Department) agents are looking at images on a vintage TV set. They express the same suspicion and consternation that many American viewers  probably did when they first laid eyes on a TV transmission in the 1940s. “What am I looking at? Is it happening in real time? Is it fabricated?” asks SWORD Director Hayward. With a tone drenched in competence and cheekiness, Dr. Darcy Lewis replies, “I don’t know. I don’t know. And I don’t know.” But Lewis responds in wonder herself when Hayward asks her where it’s coming from. “Out there,” she gestures vaguely. Another agent presses Dr. Lewis for answers. “Is it some cockamamie social experiment?” Exasperated by these men who are so flummoxed by one of the most basic elements of entertainment culture, she answers simply, “It’s a sitcom.”

Lewis’s reaction is a proxy for those of us who are disappointed, as I am so often, that knowledge of or interest in relatively recent history seems in short supply in the digital age. The exchanges around the TV at SWORD are self-referential treats, coming out of a Millennial mouth via GenX WandaVision creator Jac Schaeffer, for us Boomer and GenXers. The scene is tucked into a basket full of Easter eggs delivered over nine episodes, my personal favorite being the appearance of Kitty Karry-All in the Brady Bunch-esque third episode.

The SWORD gaggle is watching Avenger Wanda Maximoff in a 1950s setting on a TV that had to be scrounged up from a dust heap. I am an Avenger philistine and went into this latest iteration from the Marvel Cinematic Universe without having even audited any of the prerequisites. Ask me about Ultron, the Darkhold, or the Blip, and like Dr. Lewis, I will respond: “I don’t know. I don’t know. And I don’t know.” When I began hearing about WandaVision, I was intrigued and gratified by the TV theme but did not lift a finger to sign on for Disney+. As the social media-verse ramped up its commentary, however, and as more than a few people told me I was duty-bound to watch it, I succumbed. 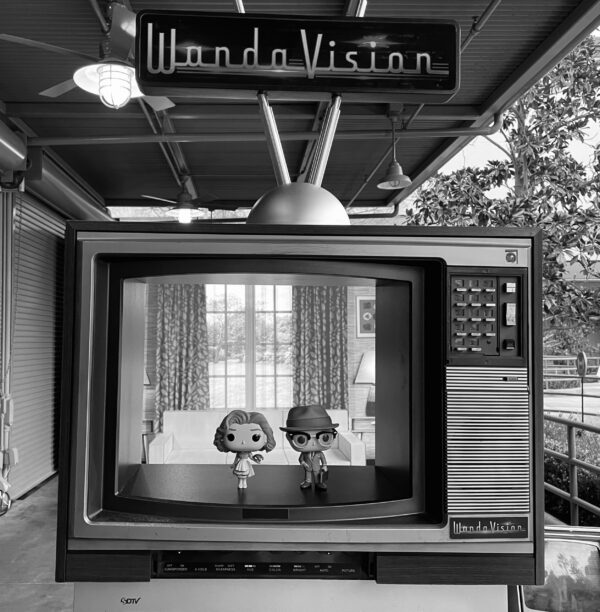 I am a TV person, that is, one who grew up very close to the medium. My hair statically clung to the screen and I can still perform any TV jingle from the 1970s on demand. I went to journalism school to become a TV critic and then became an academic who researched and wrote about its history. TV and I have been intimates for a long time. We’ve both changed quite a bit over the last half century, but we’ve grown together. Culture has called time of death for my beloved more than once, but she’s tougher than a Timex watch and an American Tourister suitcase combined.

Some TV people might see WandaVision as a last gasp, a Dear John letter, a swan song for us olds. Not me. I see it as further evidence that TV – the furniture, the concept and the word – isn’t going anywhere. TV as an entity is so baked into modern U.S. culture that even when we no longer have sets and barely even take advantage of the technology through which television was originally proffered in order to watch “content,” we still call it “television.” The vocabulary can stay as is in our conversations. When your sniffling spouse asks you to hand him a Kleenex, you don’t say, “We don’t have any. But we do have these Puffs facial tissues.”

So it is when I ask 18-year-old undergraduates, who have likely never seen a TV thicker than a box of Kleenex, “What is your favorite TV show?” they don’t stare at me blankly. They immediately begin a passionate discussion about a litany of streaming content that can easily take up a class period if not a semester. WandaVision itself is described as a television mini-series, even though it is technically an instance of streaming content that I can watch on my phone and one that came into existence after more than twenty successful franchise film precursors. TV is no longer the medium – it’s the brand. And the brand is the message.

The multiverse of WandaVision, by definition, allows for parallel existences. And while Marvel can’t be all things to all viewers, in this case, the Universe invited in a bunch of unlikely and reluctant consumers who might have carried on quite contentedly and ignorantly if social media hadn’t lathered us up. My Twitter feed showed signs of angst from several non-Marvel TV people wondering if we had to watch it, if we had to bone up, laboriously, on the entire Universe backstory. Our inherent academic insecurity was compounded by basic human FOMO. I live to assure the others that this endeavor asks little of you. As a non-Marvel TV person, you can try to follow, as I did in vain, the Scarlet Witch plot line, but it’s unnecessary. I was in it for the character’s cartoonish reactions, the brilliantly recreated awkward laugh track, the ersatz commercials and the tender homage details.

“The universe created a sitcom starring two Avengers?” a SWORD agent asks Darcy Lewis with incredulity after discovering that Wanda had entered the TV land realm. “But why?” She doesn’t have an answer for him, but I do: TV is still magic, and it still matters.

Kathleen Collins is an academic librarian who lives in NYC. She writes about TV for the academic and popular press, and is the author of Watching What We Eat: The Evolution of Television Cooking Shows (Continuum, 2009)