A combination of fate and a yearning for adventure sent me halfway around the world to live in New Zealand’s capital city, Wellington.

Here I discovered, instead of a foreign land, my natural habitat.

Wellington has words at its very heart.

I have loved words since I was a little girl. I used to create closet cubby holes – curling up under mounds of blankets and a bright lamp – to escape from reality between the pages of countless cherished books. My passion grew as I grew; from reading to writing to broadcast to public speaking.

Words are my ambrosia.

So, on my first day in Wellington, I was giddy when I walked the waterfront and wandered into “sculptural quotations”, whimsically placed in walkways and seawalls. I later learned this is an art installation called, “The Writers Walk,” designed to “lift the spirits and tie literature to landscape.”

The landscape here is city-to-sea, enveloped by folds of lush green hills. At its heart is the half tamed, half wild Botanic Garden. It’s where I spend hours enjoying sanity-restoring strolls. At the Founders’ Entrance is a plaque dedicating the garden, with words written by the Dutch humanist Erasmus, “to the honourable pleasure of rejoicing the eye, refreshing the nose and renewing the spirit.”

So it was uber-appropriate that as part of this year’s New Zealand International Arts Festival, the Garden was transformed in a way that transported me straight back to my childhood spent reading novels. I felt like Alice in Wonderland.

In an exhibition called the “Power Plant,” artists used electric lights, music, mist and, yes, words to create an other-worldly experience for exhibit-goers. At one point we found ourselves walking down a garden path, craning our necks to look up at the steep banks at either side.

What did we see? Written expressions flashing on and off in fluorescent flourishes.

Spectators instantly became participants as we tried to read the flashing phrases out loud, giggling as we uttered nonsensical sounds in our rush to solve the miniature riddles before their luminescence disappeared.

At another turn, a spotlight projected botanical terms that then dissolved into pictures of what they represented. White light against green trees piercing the pitch black darkness.

Can you picture it?

One particular phrase comes to mind again and again when I reflect on experiences like these in my new life here. I found the phrase curled up inside a fortune cookie that I broke open decades ago.

It read, “On earth, there are little slices of heaven.”

One of the Writers Walk quotations also tends to echo in my brain – and makes me smile each time I read it. Originally penned by Bill Manhire, it’s displayed in a protected little alcove and reads,  “I live at the edge of the universe, like everyone else.” 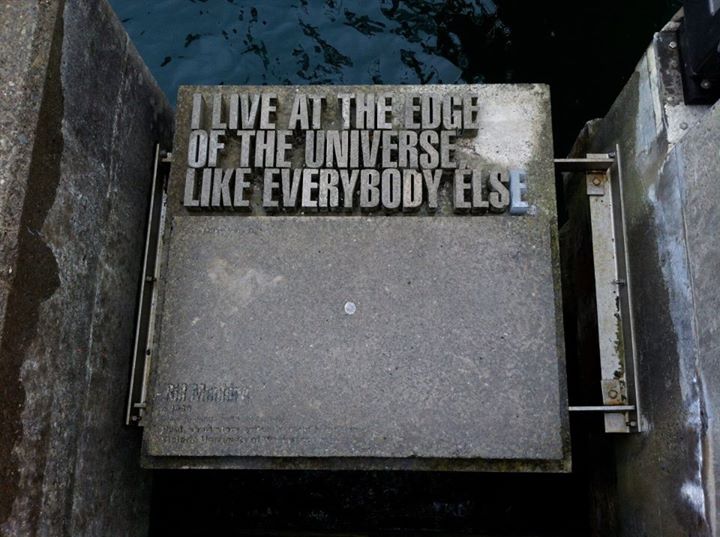 Manhire, New Zealand’s first Poet Laureate, happens to be the man who founded Wellington’s own incubator for writers: Master of Arts in Creative Writing at Victoria University’s International Institute of Modern Letters. The program is now world famous, in part because it helped catapult Man Booker prize winner and Kiwi Eleanor Catton, to the world podium where she now reigns.

Thrilling news, then, to learn that Catton would be coming back to Wellington – to be a featured speaker this year for the shiny gold nugget at the heart of the New Zealand Art Festival: “Writers Week.” She would deliver the 2014 New Zealand Council Lecture – on “Change in Fiction.”

Imagine – a chance to get a peek into into the inner workings of a writer’s mind like hers?

Catton is only the second New Zealander and the youngest winner ever of the Man Booker prize. I’m in the middle of reading her epic 832 page novel “The Luminaries”. It’s an elaborate work of fiction about murder, greed and the gold rush on New Zealand’s West Coast (of the South Island) in the mid 1850s. I’m behind – everyone else I’ve spoken with has already devoured it.

Here is just one of her delicious descriptions, about a group of assembled characters in the novel:

“The glow of youth was quite washed from them. They would be crabbed forever, restless, snatching, grey in body, coughing dust into the brown lines of their palms.”

832 pages of this kind of intricately crafted turn of phrase. What would it be like hearing her speak?

There are nearly 800 seats at Wellington’s Embassy Theatre, and each and every one of us there to hear Catton sat rapt – desperately trying to keep up with her fast flowing imagery and intellect-driven interpretations. Suddenly she finished (she did warn of an abrupt ending) and opened up the floor to questions.

Dead silence followed. We were, in the truest sense of the word, stunned.

She seemed perplexed. Admitting that she had written all night – stopping only for a 40 minute nap – and finishing only minutes before the talk, she even volunteered an ‘out’ for everyone, saying, “We don’t have to do this!”.

I doubt she grasped at that moment, that we were all at least five steps behind. Just trying to hold onto the gossamer threads of her thoughts – any that we managed to grab onto before they slipped out of our minds – and weave them into some semblance of a portmanteau. This, before we could even think of a way to respond that wouldn’t sound dim-witted or superficial.

Painfully aware of sounding woefully inarticulate  in contrast to her careful composition, I ventured an unusually tongue-tied query along these lines: why did she think our society, which reduces words to bare essentials, in emails or even 140 characters, is still so lured by the beauty of literature? So much so, that we would race to read 832 pages and sell out a theater to listen to even more of her musings?

Eleanor Catton’s answer spoke straight to the little girl inside of me – the one who ran away from reality through books.

Catton answered, with a nod to Diana Wynne Jones, “we turn to literature to enlarge our lives…”, adding, “literature is spiritual…it feeds a part of our soul.”

To that I’d add…through words, the spirit lives on.

As I write this, I have just learned of a dear friend’s passing. Ann Murray Paige was a journalist and warrior – armed with words – in the battle against breast cancer. When I moved to New Zealand, I kept her close to my heart by reading her blogs, which articulated her feisty spirit as she fought to the finish.

A stronger woman I have never known.

Though she no longer walks among us, Ann is still very much present. Her sharp, pointed phrases lead the charge against her disease and her rare moments of frailty unfailingly touch people’s hearts. In a uniquely fitting tribute, her casket was left unvarnished so that friends and family could write parting words on her coffin with sharpies. Her husband called it a way to “finish” the coffin with love: a “collective celebration” of her life.

I live. In a cultural capital that values words and their worth. In Wellington, where they recently unveiled a silver statue punctuated with the words of hometown heroine and hellion Katherine Mansfield. In a place where words whisper in the winds. Ever-present. Forever at its heart and in our souls…