What a Creep: Creepshow‘s Problem With Consent

Creepshow was a cult classic by the time I was a kid in the ’90s picking out VHS movies, a bizarre mix of Disney animated films and horror, at the local Video 2000. One of my frequent VHS picks, Creepshow filled me with terror and glee, exactly what a horror/comedy is set out to do.

Creepshow 2 had equally fantastical and horrifying tales, but it was a brief, “non-scary” scene from “The Raft” that unnerved me. Four college students head to a lake during the off season for some fun and privacy. The friends—two couples—decide to swim out to a raft in the middle of the lake. In doing so, one of them is attacked by a giant blob creature. One by one they are eaten alive by the lake monster. (Creephshow 2 1987)

The first time I watched “The Raft,” I was a pre-teen. Maybe twelve, maybe eleven. Maybe even younger. The trauma I sustained as a child has made it difficult for me to accurately say when certain things happened in my past—but I know they happened. When friends Randy (Daniel Beer) and Laverne (Jeremy Green) are the only ones left alive, they are marooned on the raft. While Laverne is sleeping, Randy sees his chance (his own girlfriend and Laverne’s boyfriend only recently dead) and begins to kiss and touch Laverne’s unconscious body. He stops when Laverne awakens screaming because the lake monster is eating her face.

By the time I watched Creepshow 2, I had already internalized a slew of what I now recognize as misogynistic, racist, and bigoted ideologies hand-fed to western society. Unfortunately, these stereotypes of gender, sex, race, and class were rampant in all media. For a young Latina dealing with additional familial and cultural traumas, saying that something I saw in a film (let alone, a horror film) bothered me was going to go unheard. That’s a scary movie, Ash, it’s supposed to bother you.

Flash forward to 2021, the world is still struggling to come out of a pandemic on the heels of social, civil, and political unrest. The Black Lives Matter and #MeToo movements are heavily reported topics in both mainstream and social media. The ideologies of the ’90s and before that I had seen and silently flinched at are being called out, fought about, and finally discussed.

In April 2021, the second season of the Shudder’s Creepshow series premiered. As a long-time fan of the franchise, and someone who enjoyed the first season, I looked forward to it. I was captivated and charmed by most of the stories. Then I watched “Sibling Rivalry,” and my heart dropped low in my chest. Uneasiness flooded me as it did the first time I had watched “The Raft.”

In this installment, a teenage girl confides to her high school counselor that her brother is trying to kill her. The girl is dismissed as delusional, although the brother is really trying to kill her. She is—apparently completely unknown to herself—a vampire who murdered their parents. After a short confrontation, the siblings reconcile and figure out that the sister’s best friend had turned her into a vampire. The sister turns the brother, and together they seek revenge. (Creepshow 2021) But the weak plot wasn’t the only problem. There were issues of sexual assault, and racist and bigoted representation—as if I were back in the early ’90s instead of 2021. 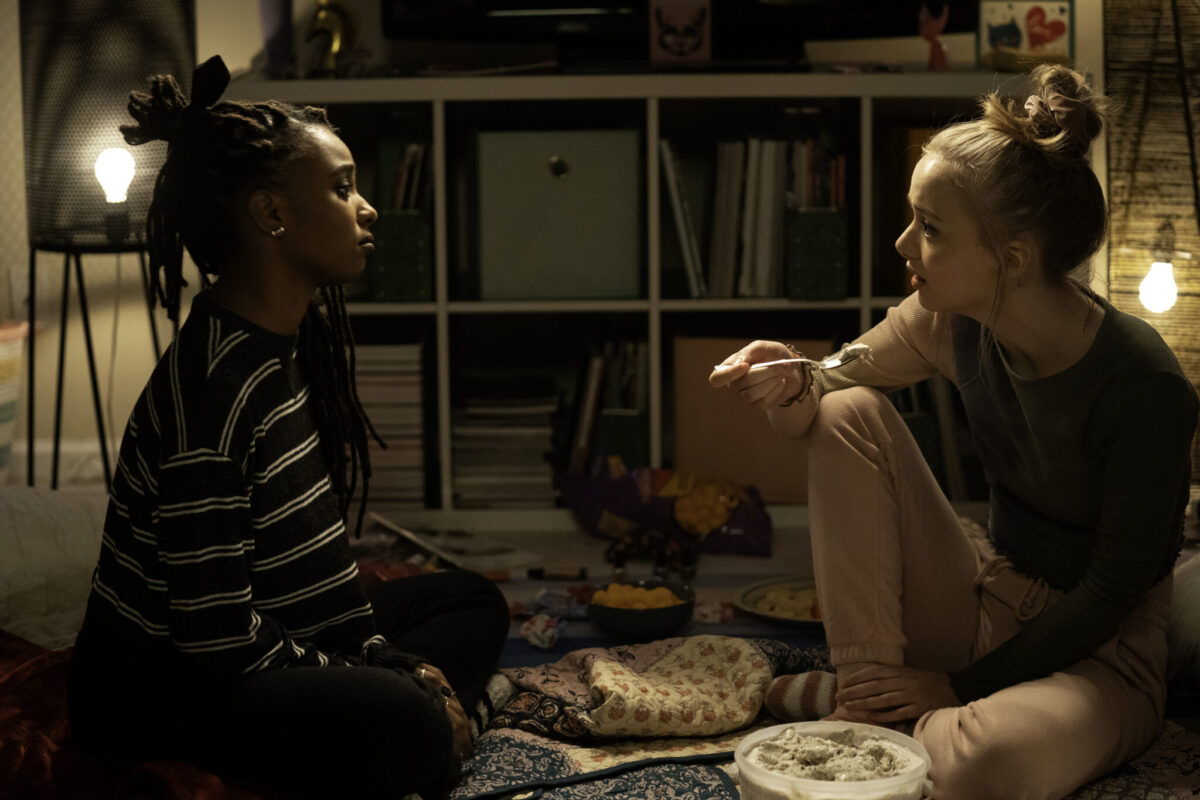 After watching “Sibling Rivalry,” I immediately went to the internet to read reviews. I was sure I’d see comments on the stereotypical and problematic portrayals of the two teen girls, main character Lola Pierce (Maddie Nichols) and best friend Grace (Ja’ness Tate). I was dumbfounded that not only did I not see any backlash regarding the girls’ portrayal but instead that reviewers found Lola’s character as a scatterbrained, overly chatty young girl as both hilarious and accurate. Accurate?! Worse, no one mentioned that Grace, a teenage Black girl, has no agency and is the story’s eventual antagonist whose beheading is shown as justified, while white siblings Lola and Andrew (Andrew Brodeur) are signaled as the protagonists, even as they kill the counselor, Ms. Porter (Molly Ringwald).

Dumbfounded is too weak of a word. I was angry. Through the whole story, I had been hopeful that somehow these detrimental representations would be turned upside down, destroying perceived stereotypes. That was not the case. Grace was a one-dimensional, demonized Black character who assaulted her trusting, innocent white friend. Did no one really see this as a problem?

Horror has a reputation of being all gore and sex. Faceless male killers ripping into naked female bodies and killing off BIPOC characters to prevent them from having agency or being heroes. Labels such as horror, campy, horror/comedy, or the like, got away with problematic behavior because mainstream media and consumers dismissed the genre as low brow. Either issues in the genre were unnoticed by most people, or fans didn’t know how to call out problems in something they generally loved. But the reputation of horror is changing. More thought-provoking, diversely written and cast films and shows are being produced. In 2021, the world is struggling to change for the better.

That’s why “Sibling Rivalry” is a problem. The naysayers will say, “This is supposed to be a comedy-horror show.” “It’s meant to be funny.” “Can’t you take a joke?” But it’s difficult, as a BIPOC woman, not to take it seriously. In a way, I saw both Lola and Grace as informal representations of me in high school: both teenage girls, one a BIPOC, and one (possibly both) dealing with traumatic experiences. The characterization of Lola and Grace were sloppy and thoughtless. Even if a story is supposed to be campy and comedic, I strongly believe that the characterization should still be good.

Why does this matter so much? Because representation matters. Even representation in a campy, horror cult franchise. While Lola’s character can be argued as part of the silly, humorous storytelling, the reviewers’ identification of her character as “accurate,” instead of a caricature, demonstrates how people consume and adopt what they see in the media. So, what must they think of Grace? While it’s never one character’s job to represent an entire group of people, individual characters should still be written with agency and nuance.

While there is no issue with Grace being a vampire or the antagonist, there are issues in the dynamic between the two girls, and Grace’s lack of agency. Some people may argue that since Grace made the decision to bite Lola, that shows agency, especially since the bite propelled the story forward. But Grace was never given the chance to explain why she turned Lola. This installment is about twenty-five-minutes, and Grace has seven short lines. The audience never hears or sees Grace’s side of the situation, only Lola’s version. After being a tool to create the inciting incident, Grace falls into the background. A teenage Black girl is used as a pawn in a story about two white siblings. She is shown as the heartless vampire who took advantage of her naïve friend, and her only source of empowerment is hurting others—and the other that she hurt is a white girl.

This is a shallow and stereotypical representation of the only Black teen girl in the story. Yet, no one—not producers, writers, directors, and reviewers—noticed. No one noticed that Grace’s unnamed brother had no lines and was only seen as a sexual temptation for Lola. Aren’t we past using characters of color to serve white stories?

Thirty years ago, people shrugged off abusive moments—such as a man molesting a woman on a raft—as a guy just being a guy. Today, Creepshow still has a problem with consent. Grace turns Lola into a vampire during a sleepover, taking advantage of her while she is sleeping (sound familiar?). Lola originally believes that Grace is coming on to her, kissing her neck, not biting it. Either way, Grace has assaulted Lola, and when Ms. Porter is told of the situation, she correctly calls it out. But Lola backtracks, saying that’s not what’s important. To anyone who has been sexually assaulted, especially by a friend, family member, or person they may have trusted, it is extremely important. It’s important not to feel shame or guilt about being a victim. Yet, Lola brushes it off saying, “No. Gosh. No. I don’t—Not assaulted. It was just a misunderstanding.” (Creepshow 2021)

This scene demonstrates that being taken advantage of is not a big deal if it “was just a misunderstanding.” That’s not true and definitely not okay to portray, again, even in a campy horror show. As a survivor of sexual abuse, I was deeply troubled by this scene. I am still troubled by it. I also feel that the creators missed an opportunity to deal with trauma via vampirism.

Should any media (or company or persons) get a pass because the problematic content produced is claimed as unintentional? No. Because representation matters. The audience internalizes the content that they ingest as having some truth to it, especially if they are not exposed to diversity and healthy interpersonal dynamics in their everyday life.

I have often wondered what was supposed to be the scary part in “The Raft”—Laverne’s face being digested by a blob monster, or Laverne being molested by someone she trusted during a traumatic and vulnerable time? In the ’90s, as a child who had little autonomy, this scene reinforced to me that boys, men, friends, etc. can and will take advantage of any situation. But don’t worry about that, that’s normal. Worry instead of the make-believe blob monster hidden under the raft. It was way out of character, too, like an unexpected, quick left punch. To this day, Randy’s actions bother me as a survivor. They also bother me as a writer and editor—what did that even have to do with the story?

Horror is often considered a “safe place” to be scared, a place where we can have a rush of endorphins merge with a bolt of adrenaline, then turn off the TV. We’d like to be terrified and elated without having our everyday trauma thrown in our faces as a plot device.

As I heal, evolve, and struggle to do better, I have hopes that the media (a snapshot of the western zeitgeist) will heal, evolve, and do better too. I know we have a long, difficult road ahead of us. As content creators, we have a duty to be thoughtful and purposeful in our work. Hiding behind genre—whether it be horror, comedy, campy, or otherwise—has never been acceptable. What has changed is that the marginalized and silenced are taking back their agency, voice, and autonomy. We are people. We have stories. Our experiences deserve to be heard and seen. Always. Because representation matters.

A.E. Santana is a Southern California native who grew up in a farming community surrounded by the Sonoran Desert. A lover of horror and fantasy, her works can be found in Latinx Screams, Demonic Carnival III, and other horror anthologies. She is the managing editor for Kelp Books, the paranormal/true horror editor for Kelp Journal, and the co-editor for The Coachella Review’s column, Voice to Books. She is also the moderator for The Thing in the Labyrinth, a horror book club hosted by The Last Bookstore. A.E. Santana is a member of the Horror Writers Association and a founding playwright for East Valley Repertory Theatre in Indio, California. She has been a moderator for several horror panels, including “No Longer the Scream Queen: Women’s Roles in Horror.” She received her MFA in fiction from the University of California, Riverside’s low-residency program. Her perfect day consists of a cup of black tea and her cat, Flynn Kermit.