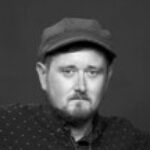 Book Review: What Kind of Man by Tony Gloeggler

Tony Gloeggler’s latest book, What Kind of Man (NYQ Books, 2020) is a brutally honest, succinctly crafted, precisely worded collection of poems. The book has all the street eloquence that brings Gloeggler’s gritty, no nonsense, New York City world to life.

Gloeggler chronicles his battle with a life-threatening kidney disease in potent, cinematic narratives peppered with nuanced dialogue, at times leaving the reader with devastating uncertainty. “Renal Sonogram” is a mean and horrifying rush, a riot act on the edge of hell:

“I leave/knowing I will have to wait/patiently as possible until next/Tuesday, 12:45, for my doctor/to interpret the results, maybe/look me in the eye and deliver/news I’d never want to hear/or the chance of a happy ending” A lifelong audiophile and New York Yankees fan, Gloeggler finds strength, meaning, and beautiful distraction as he undergoes dialysis with a powerful “wall of sound” headphone force field around him, evident in the weariness of poems like “The Dialysis Shuffle” which name checks the tragic ‘60s crooner Sam Cooke. Gloeggler transports himself through space and time as he embarks on a rigorous journey to heal to a pop music soundtrack. His passions are part of the makeup of this man’s survival–baseball and music. Gloeggler weaves the cultural landscape of America into the kind of teenaged hope he finds in the songs of Brian Wilson. And when his physical health begins to fail, Gloeggler’s determination and quiet passion in the face of death carries him through. He still daydreams about being the next Thurman Munson or Southside Johnny or Brian Wilson–and after reading his dialysis poems, Gloeggler takes his place among those men–his voice is crystal clear and alive with the defiant vigor of youth.

Gloeggler’s poems explore what kind of man to be in this new century. These poems are authentic and restrained, with a counterpoint of syncopated rhythms and sharply manicured line breaks. These are vivid studies of real people with everyday lives and real life problems. The kind of men in search of solutions. These poems teach their readers how to survive and thrive with a sage, hard-fought wisdom and vast integrity that helps bring the world forward. Like “Legacy”, a poem that hits the ball right out of the park, its verses in response to Gloeggler’s father’s demise, and his stark honesty about their difficult relationship. His is fearless in his pursuit of harsh truths:

At times the poems are a big chill down the spine, with their honest depiction of everyday glories, set to the soundtrack of musical giants like Bruce Springsteen, Wilson and Cooke. Gloeggler’s verses are penned by a home run king, ever sharp with an electric cool in the face of their author’s own mortality. Gloeggler shines when depicting his close relationships with men: especially the autistic son of a former girlfriend, and the developmentally disabled men he’s worked with at a group home for forty years. These poems reveal a new kind of man, one who acts as a caretaker and who builds and chooses a new kind of family with a newfound spirit, a kind, empathetic, thoughtful man who knows how to express himself and how to truly listen to other people.

Gloeggler’s new lease on life as a result of a successful kidney transplant is something that readers of these poems will surely applaud. He, like many of his subjects in these fine, often extraordinary poems are real heroes of the everyday world, men we can root for and admire. His humanity is evident in the poem, “Larry,“ which brings to life a loving and powerfully real portrait of one of the disabled men Gloeggler helps care for, and loves:

“I shadowed him, hugged him from behind, pressed/my face to his cheek,/whispered something soft,/something silly, and helped him grab the handrail,/walk inside while I told him he wasn’t going anywhere”

Gloeggler’s regard for Larry is honest and powerful in its devastating humanity. In my opinion, Gloeggler’s definition of what it means to be a man makes him even cooler than Thurman Munson. He makes like Brian Wilson and builds his very own free verse teenage symphony to God. These poems don’t take shit from anyone.

To say Gloeggler hits it completely out of the park is an understatement. Just check out the stunning final lines of surrender in the book’s title poem:

“Mostly, I am stuck/wondering what kind of man/I can still be? This morning, /I’m the kind of man who lets/a male nurse strip my clothes/to a pile on the floor, wash/my front and back, stand me up/and let me hold his shoulder/as he cups my balls, and gently/scrubs them clean while I try/not to inhale the tuna fish/on wheat he ate during/his late-night lunch break./The kind of man who stares/at the wall and whispers/thank you into his ear.”

Tony Gloeggler is a master poet at the height of his powers. What Kind of Man belongs in more than one Hall of Fame.