Kelley Brannon used to send these long, meandering email newsletters on occasion, to a list of who knows how many friends. I loved receiving them because the way she wrote them you could hear her voice—talking fast, an explosion of 16 thoughts at once, usually ending with a rant or a plea to support a cause or to become more aware of an issue. Through the impersonal format of mass communication, her enthusiasm and activism, her determination to remain positive no matter what was happening, her ability to win friends wherever she went—these essential elements of her always came through in her storytelling.

I always felt an intimacy and connection to her in reading these, like she was standing right in front of me, trying to squeeze in everything that’s been happening in her life since the last time we met. I had not seen Kelley at all in the years since I moved from East Coast back to West, we had not even been the best or the easiest of friends when we were in the same city, but I always appreciated reading about her adventures and mishaps and successes.

The last email like this that I received was on the Fourth of July, 2020 (titled, appropriately, “Fuck the 4th of July”). From time to time it occurred to me that she hadn’t sent anything lately and given the pandemic, I wondered. Then a couple of months ago, I learned via Twitter from a mutual friend: Last July 15, 2020 was the last time Kelley was seen or heard from by anyone. Anyone. 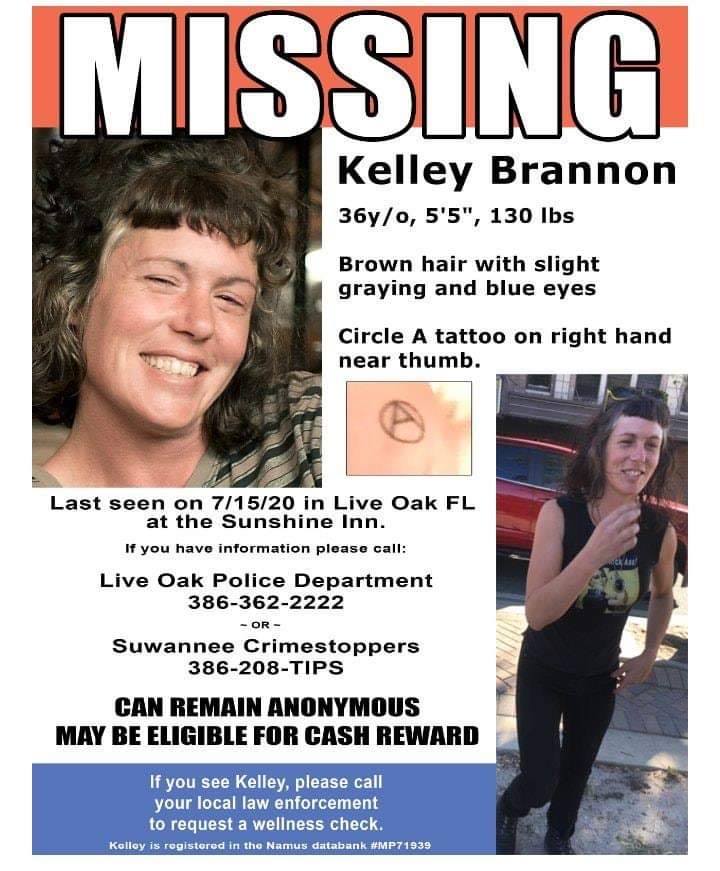 There is a lot more to her and to her story that no one knows, so I wanted to share something special in time for this heartbreaking anniversary to let people know who she is, in case by some chance they see her or saw her or come across information. Like all lost persons, Kelley is someone who deserves to be found.

Around 2015, Kelley told me about an art project she did as she was leaving Brooklyn and I interviewed her about it. I never found the time to transcribe and publish the interview. I’m going to do that soon, so that I can share her own words. But first i wanted to share this, from an even earlier date.

Kelley asked me to write her a letter of recommendation when she applied to graduate school. I was teaching writing workshops at the time but not for a university and she had never been a student of mine. Still, she needed recommendations from people with some professional credential. This is what I wrote. When I saw a news report mention that she had earned her MFA, I smiled.

To Whom It May Concern:

I am writing to recommend Kelley Brannon for admission to your master’s writing program. I am certain that if she is accepted, she will dedicate herself not just to studying and improving her own writing, but to making a valuable contribution to the success of her fellow students.

The first time I met Kelley, my writers’ collective was scheduled to perform at the Bodega Monthly storytelling series, which she founded and hosted in Bushwick. As we planned the event, whenever her name came up it was on a familiar basis: one of those people everyone in a community just kind of knows. “You don’t know Kelley?” a writer might ask another, with a little surprise.

When I arrived at Bodega for the reading, I immediately understood why. She was speaking with two readers about their time slot, telling a story to someone else and introduced herself to me as I walked in: impressive verbal multitasking.

Later, Kelley planned and created an anthology of the reading series and invited everyone who had been part of it over the year to contribute. She coordinated a monster reading for the release of this printed journal. I submitted a poem to the anthology and read it that night. Afterward, the readers all received an email letting us know Kelley was leaving Brooklyn for a while, but we were welcome to stop by the bar to pick up our share of profits (calculated to the penny and rounded up to the next dollar, for about 20 of us). I was impressed with her thoughtfulness and her commitment to seeing the project through all the way to these final details. In this she displayed a courtesy and respect for writers that made the experience gratifying.

A month or two later, I eventually retrieved an envelope with my name on it containing $4, and smiled. The bartender had no idea who I was. I hoped Kelley would return to Bushwick, as she’s a person who sees and then forms a community from a disparate group of people who otherwise might remain in the socially awkward, self-imposed states of exile that writers sometimes adopt. When I ran into Kelley recently, she was talking to at least two other people but made a point of stopping to discuss the poem I’d read (at least six months earlier). She is a natural community builder and strong supporter of others’ work, as well as a writer who has explored many topics through multiple writing forms. However, she has not studied writing formally, and I’d love to see what she could do with an opportunity to focus on developing the many ideas she has for fiction, poetry and playwriting projects.

I am a nonfiction writer and I teach professional writing at 3rd Ward, primarily to visual artists and small-business owners. Teaching at 3rd Ward is satisfying because students are motivated and very interested in learning business skills that they can immediately apply to their work or creative efforts. In the year or so since I started teaching there, I’ve learned to identify the students I believe will succeed. They are the motivated hard workers who come to a workshop hoping someone will help them direct their energy and raw passion to the path where that enthusiasm can become a foundation for knowledge and, eventually, lead them to a fulfilling sense of creative accomplishment. I believe Kelley also has this potential to succeed, the passionate interest in acquiring the tools of a field of knowledge so that she can become the skilled storyteller and communicator she was born to be. On this basis, I sincerely recommend her to your program.

Please feel free to contact me if you have any additional questions.